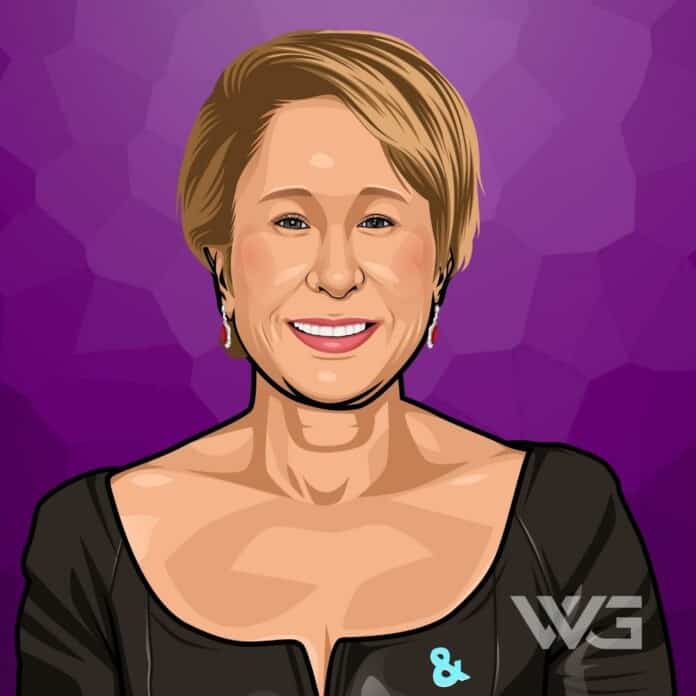 What is Yeardley Smith’s net worth?

Yeardley Smith is an actress, writer, and artist.

Smith currently stars in the long-running voice role as Lisa Simpson on the animated television series ‘The Simpsons.’

In 1982, she became an actress after graduating from drama school. In 1985, she made her film debut in ‘Heaven Help Us.’

As of December 2022, Yeardley Smith’s net worth is estimated to be roughly $85 Million.

Martha Maria Yeardley Smith was born on the 3rd of July, 1964, in Paris.

Her father worked for United Press International in Paris. Her mother was a paper conservator for the Freer and Sackler Galleries at the Smithsonian Institution. Smith’s parents later divorced.

As a child, Smith was often teased because of her unusual voice. She has stated: “I’ve sounded pretty much the same way since I was six. Maybe my voice is a little deeper now.”

After high school headed off to New York to kick start her career. Smith understudied the role of Debbie on Broadway in Tom Stoppard’s ‘The Real Thing,’ starring Jeremy Irons and Glenn Close, then took over the part for eight months.

She then starred in the films Heaven Help Us’ and ‘The Legend of Billie Jean.’ She began with stage work in ‘Boys and Girls/Men and Women’ and then did ‘How the Other Half Loves.’

Smith played a recurring role in the comedy ‘Brothers’ in 1984. Yeardley then won the part of the animated character, daughter Lisa ‘The Simpsons’, launched on the sketch TV comedy series ‘The Tracey Ullman Show.’

She made the television rounds on camera as well with comedic guest appearances on ‘Dharma & Greg,’ ‘Murphy Brown,’ ‘Empty Nest,’ ‘Mama’s Family, and a regular role for three seasons as Louise on ‘Herman’s Head.’ In 2004, Yeardley performed in her own one-woman autobiographical show entitled’ More in New York City.’

Being an actor on ‘The Simpsons,’ she makes $300,000 per episode. That translates into around $7 million per season.

As of December 2022, Yearley Smith’s net worth is estimated to be roughly $85 Million.

How Does Yearley Smith Spend Her Money?

Smith has spent some of her money helping different charities.

Smith has helped charities such as American Foundation for Equal Rights and Human Rights Campaign.

Here are some of the best highlights of Yeardley Smith’s career:

“Everybody sort of questioned why we get married on New Year’s Day, and of course, the avid sports fans wouldn’t come, because they had to watch the Rose Bowl or whatever that is on that day.” – Yeardley Smith

“It’s very strange … I feel a part of Lisa Simpson very much, and she feels like she is in me, but the world feels very two-dimensional to me, so this is actually all very new.” – Yeardley Smith

“It’s really my first love. I really started out on stage doing school plays – I actually started on stage when I was like, five or six years old. There was a woman in my neighborhood, and she would turn her one-car garage into a little theater.” – Yeardley Smith

“And what I didn’t know was understudies almost never take over the role, which is good they didn’t tell me that, but it doesn’t make so much sense to me. I thought, well, if you thought I was good enough for the understudy and then somebody left the show.” – Yeardley Smith

“I loved it. I did the show for about six months before I left to do a movie called The Legend of Billie Jean. And then I came back to do The Real Thing for a couple more months. Jeremy was back in the play in that fall of ’84 because I believe his wife was there with the Royal Shakespeare Company because they were doing some fancy production on Broadway.” – Yeardley Smith

Now that you know all about Yeardley Smith’s net worth and how she achieved success; let’s take a look at some of the lessons we can learn from her:

You can’t create a monster, then whine when it stomps on a few buildings.

Is your remarkably sexist drivel intentional, or just some horrible mistake?

How much is Yeardley Smith worth?

Yeardley Smith’s net worth is estimated to be $85 Million.

How old is Yeardley Smith?

How tall is Yeardley Smith?

Yeardley Smith is a French-born actress, writer, and comedian.

She was born in Paris, and she is best known for he long-running voice role as Lisa Simpson on the animated television series ‘The Simpsons.’ Growing up, she was a shy and introverted child, and she started her young career at a nearby dinner theater where she played Tinkerbell in a musical adaption of ‘Peter Pan.’

As of December 2022, Yeardley Smith’s net worth is estimated to be roughly $85 Million.

What do you think about Yeardley Smith’s net worth? Leave a comment below.