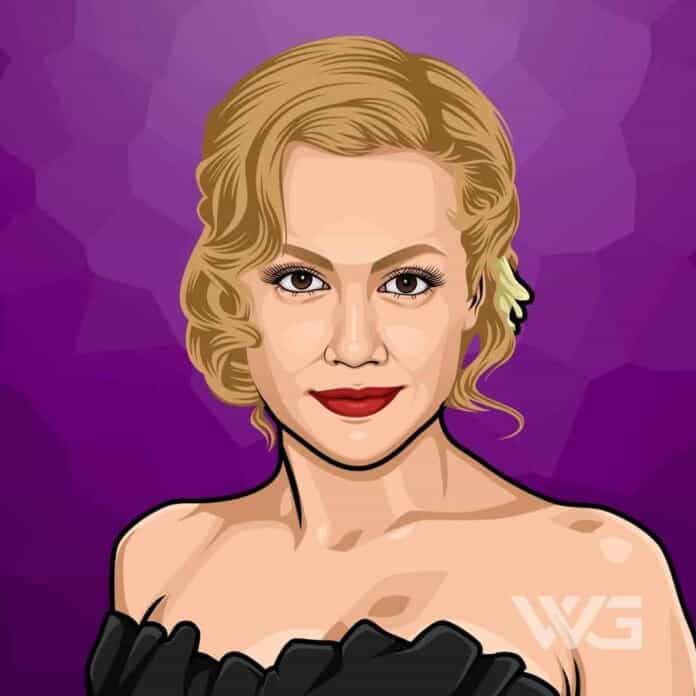 What is Brittany Murphy’s net worth?

Brittany Murphy was an American actress and singer.

Murphy got her breakthrough role in ‘Clueless’ in 1995. She followed this up by supporting roles in the films ‘Freeway’ and ‘Bongwater.’

She made her stage debut in a Broadway production of Arthur Miller’s ‘A View from the Bridge’ before appearing as Daisy Randone in ‘Girl, Interrupted’ and as Lisa Swenson in ‘Drop Dead Gorgeous.’

Brittany Anne Murphy-Monjack was born on the 10th of November, 1977, in Atlanta, Georgia.

Murphy is the daughter of Sharon Kathleen Murphy and Angelo Joseph Bertolotti, who divorced when she was two years old.

She was raised by her mother in New Jersey. In 1991, the family moved to Los Angeles so that she could pursue an acting career. Murphy said her mother never tried to stifle her creativity, and she considered her mother a crucial factor in her later success.

Murphy made her Broadway debut in 1997 in ‘A View from the Bridge. She landed her first job in Hollywood when she was 13 years old. She then went on to play Molly Morgan in the short-lived The Torkelsons spinoff ‘Almost Home.’

Throughout her career, she has also guest-starred on several television series, including ‘Parker Lewis Can’t Lose,’ ‘Blossom,’ ‘seaQuest 2032,’ ‘Murder One,’ and ‘Frasier.’

Murphy rose to fame when she was in her second feature film in the comedy ‘Clueless’. She followed this with roles in ‘Freeway’. She also starred in the independent comedy ‘Bongwater’.

In the 2000s, he began with a leading role in ‘Don’t Say a Word alongside Michael Douglas. She also starred in ‘Devil’s Arithmetic’ and ‘8 Mile’ alongside Eminem.

How Did Brittany Murphy Spend Her Money?

Brittany Murphy spent her money on her old real estate.

In 2003, Murphy purchased $3.85 million for a home in Los Angeles, California. She bought the home from Britney Spears.

Here are some of the best highlights of Brittany Murphy’s career:

“I think if there’s something one needs to change with oneself, it doesn’t have to happen in the New Year. You can do that any time you please – not that it’s not a good inspirational tactic for the people that it works for.” – Brittany Murphy

“I’ve always seen myself as one of those ‘show people.’ My earliest memories are wanting and needing to entertain people, like a gypsy traveler who goes from place to place, city to city, performing for audiences and reaching people.” – Brittany Murphy

“I love producing. My dream as a producer is to be able to build a company that can be a safe haven for artists, for directors and for writers and actors to do what they do best and let them have final edit. I’d like to build something to that effect.” – Brittany Murphy

“Yeah, I’m a giver. I’ve learned to be selective of the people in my world, because if I love someone, I will give them my blood, whatever they need. In doing so, one can end up with little left for themselves.” – Brittany Murphy

“It’s easy to get wrapped up in sharing everyday life with a partner. Get lost in love and romance. It’s the best. But holding on to yourself while doing that is the most important thing.” – Brittany Murphy

“My dream as a producer is to be able to build a company that can be a haven for artists, for directors, and for writers and actors to do what they do best and let them have final edit. I’d like to build something to that effect.” – Brittany Murphy

Now that you know all about Brittany Murphy’s net worth and how she achieved success; let’s take a look at some of the lessons we can learn from her:

Life presents you with so many decisions. A lot of times, they’re right in front of your face and they’re really difficult, but we must make them.

It’s easy to get wrapped up in sharing everyday life with a partner. It’s fun to get lost in love and romance.

3. Make Your Own Choices

Sticking to your values, listening to your instincts, making your own choices is so important.

How much is Brittany Murphy worth?

Brittany Murphy’s net worth is estimated to be $10 Million.

How old is Brittany Murphy?

How tall is Brittany Murphy?

Brittany Murphy was an American actress and singer who became a mainstream star in the mid-90s.

She has appeared in the films like ‘Clueless,’ ‘Freeway’ and ‘Bongwater’. Murphy made her Broadway stage debut in ‘A View from the Bridge.’ In the late 90s, she returned to mainstream films with ‘Girl, Interrupted’ and ‘Drop Dead Gorgeous.’

What do you think about Brittany Murphy’s net worth? Leave a comment below.