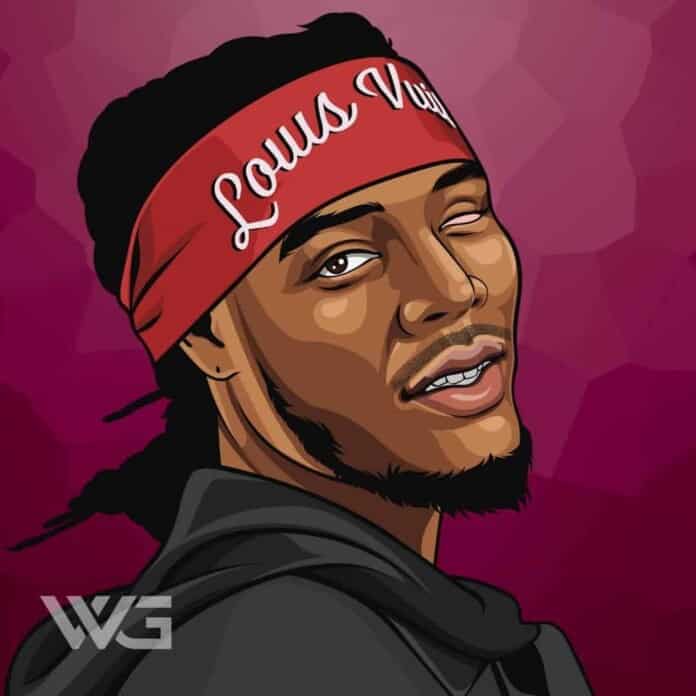 What is Fetty Wap’s net worth?

As of December 2022, Fetty Wap’s net worth is estimated to be highly $1 Million.

Fetty Wap began his career as a rapper in 2014 when he released his debut single ‘Trap Queen’, which became a platinum record and peaked at No. 2 on the Billboard hot 100.

He is currently signed to Atlantic Recording Corporation.

Willie Maxwell II “Fetty Wap” was born in Paterson, New Jersey on the 7th of June, 1991. Fetty Wap was born with glaucoma in his both eyes which made it impossible for the doctors to save his left eye.

He began with his musical career in 2013 and released his first single in 2014 which gained a lot of attention from rappers and producers.

He was nicknamed “Fetty” (slang for money) as he was known for making money. His commercial debut single ‘Trap Queen’ was released in early 2014.

Fetty Wap first became famous when he released his debut single ‘Trap Queen’ in 2014. He also adopted the name “Fetty” which is a synonym for money. After he released his first single it went viral and his name was already big in the hip-hop industry.

His first single was uploaded on Soundcloud and was played a record 130 million times by its listeners all over the world. The success of his debut single helped Fetty Wap fetch a deal with the record label ‘300 Entertainment’.

Fetty Wap released his second single ‘679’ in 2015 and a month later the song was commercially released for the public worldwide. His second single had now gone on to secure the fourth spot in the ‘Hot 100’ countdown.

The following year he released ‘My Way’ which was on ‘Billboard Top 100’. The track was later remixed by the rapper Drake.

His debut album was released in 2015 and the tracks on the album were received well by music lovers and secured the number one spot in the ‘Billboard 200’. Fetty Wap later released a single called ‘Jimmy Choo’ on Soundcloud which also went viral.

Since then, Fetty Wap has collaborated with some of the most noted American hip-hop artists. Wap later dropped two mixtapes ‘Coke Zoo’ and ‘ZOO 16: The Mixtape’.

One song on the mixtape secured the 69th spot on the Billboard Hot 100. Fetty Wap has also collaborated with ‘Fifth Harmony’ for a single entitled ‘All In My Head’.

As of December 2022, Fetty Wap’s net worth is estimated to be $1 Million dollars.

Here are some of the best highlights of Fetty Wap’s career:

“I don’t care about being Fetty Wap. Like, this doesn’t mean anything to me. My plan was to make sure that my son would be good, and I have a daughter now, so now she’s included into the equation, and the work I do as Fetty Wap made me care.” – Fetty Wap

“Because you never know when it’s going to stop. Wake up tomorrow and it could all be gone bro. All the cars, all the motorcycles, everything. All the memories. We could go into a state of emergency, you know, and the world goes to war. The money won’t count for nothing.” – Fetty Wap

“You start to stress yourself out about the people around you. You start to think, like, “What do you really want from me?” And then you forget that you, at some point, asked them for something. At some point, you needed them to take you in because you ain’t had nowhere to go. And now you turn around and question their loyalty to you, and those were the only people loyal to you. The only people that really loved you are still there, and you tanked on them. I’ll never let that happen.” – Fetty Wap

View our larger collection of the best Fetty Wap quotes!

Now you know all about Fetty Wap’s net worth, and how he achieved success; let’s look at some of the lessons we can learn from him:

1. Lead a Life of Ambition

People tend to compromise their career or passions to spend time with their close ones. Fetty Wap teaches his girl his trade and nurtures her career and drive for success.

2. Be an Encouraging Partner

People will do anything in their will to bring you down. They are going to question your lifestyle, work, and your passions. The climb to the top isn’t easy. You should never lose your focus, and never give up on your dreams.

How much is Fetty Wap worth?

Fetty Wap’s net worth is estimated to be $1 Million.

How old is Fetty Wap?

How tall is Fetty Wap?

With Fetty Wap’s catchy songs, ‘My Way’ and ‘679’, he has earned a massive fortune. He is just at the beginning of his successful career and he has worked with worldwide artists including Monty and Remy Boyz.

As of December 2022, Fetty Wap’s net worth is approximately $1 Million dollars, and there’s no doubt that this amount will continue to increase in his next five years.

What do you think about Fetty Wap’s net worth? Leave a comment below.