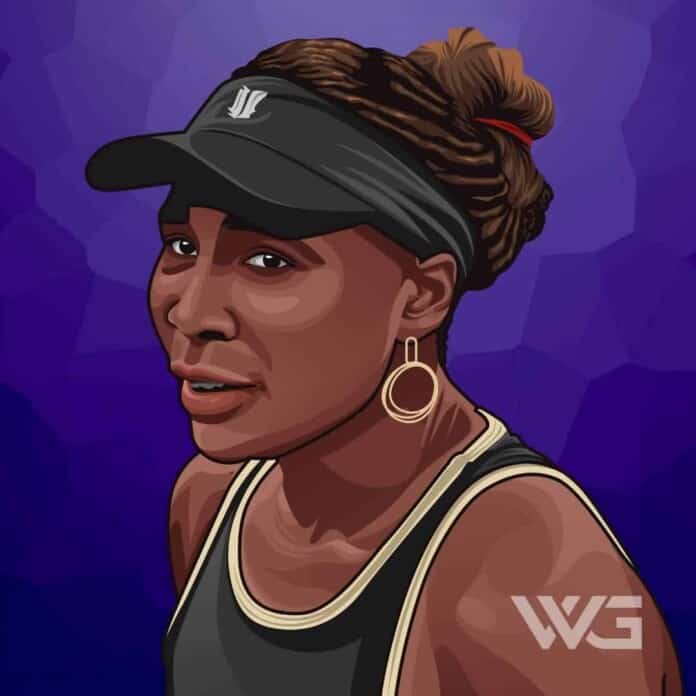 What is Venus Williams’ net worth?

As of November 2022, Venus Williams’ net worth is estimated to be roughly‎ $95 Million.

Venus Williams is an American professional tennis player who is currently ranked world No. 53 in the WTA singles rankings. She is generally regarded as one of the all-time greats of women’s tennis.

Venus Ebony Starr Williams was born on the 17th of June, 1980, in Lynwood, California. She has four siblings, all sisters. Venus was the fourth child.

The family shifted base to Compton when young Williams was just four years old. This change in location gave her and younger sister, Serena Williams an opportunity to try their hand at the game of tennis.

Read about Serena Williams net worth.

Williams’ dominance over the game started in 2000. Though she lost the early part of year months due to a wrist injury, she managed to reach the quarter-finals of the French Open. Williams went on to win 35 consecutive singles and six tournaments.

Williams’ performance at the US Open was noteworthy as she outplayed then World’s Top 2 players, Hingis and Davenport to bag the title.

At the Sydney Olympics, Williams brought home a gold medal, successfully beating Sanchez Vicario in the quarterfinals, Seles in the semi-finals, and Elena Dementieva in the final.

In 2001 was a mirror effect in terms of success for Venus Williams. She not only managed to reach the semi-finals at the Australian Open, but the sisters also won the doubles title of the year, thereby completing Career Grand Slam in women’s doubles for the duo.

Her performance at the Tier II tournaments was exceptional. She managed to defeat Hingis in the semi-finals and World No. 4 Jennifer Capriati in the final. It was due to this victory that Williams rose to a career-high ranking at World No. 2. The US Open.

In 2002, she attained the World No 1 ranking. Though she held the position for just about three weeks, she was the first African-American woman to ever take the prestigious position.

Here are some of the best highlights of Venus Williams’ career:

“My goal is always the same: to keep the other player from ever scoring a point. That doesn’t always happen, but that’s what I try for.” – Venus Williams

“I knew my destiny was to be in the winner’s circle. There were times along the way where I didn’t make it there. But I felt my destiny was definitely to win big titles, win lots of titles.” – Venus Williams

“Serena and I have done some great career planning, and we’re playing really at the peak of our tennis right now. I think tennis has been a sport where people play this insane schedule from 14 years old, so of course, at 26, it’s over. We’ve really paced ourselves.” – Venus Williams

“My dresses are designed to win, so going through it, I think about, what do I want to represent? So, definitely, Vera Wang has been an inspiration for me.” – Venus Williams

“I know it’s not the most important thing for me to win the most Grand Slams and be remembered in this world. I certainly don’t have to win little tournaments here, there and everywhere, I don’t have to win at all. Although I do want to.” – Venus Williams

“Grand Slam losses are hard. I treat myself after losses though, I usually go to McDonald’s and I have a hamburger and you know, something. Because you know, you just need to be nice to yourself sometimes after the loss.” – Venus Williams

Now that you know all about Venus Williams’ net worth, and how she achieved success; let’s take a look at some of the best lessons we can learn from her:

1. Age is Only a Mindset

Athletes have difficult and typically short-lived careers. Playing consistently at the professional level takes a physical toll that can only be sustained for so long.

By the time most athletes reach this age, they admit their best days are behind them and it’ll soon be time to retire. But with Williams, she works harder each and every year to stay on top.

Quite often in life, your age is only a mindset. Don’t place limits on yourself because of how old or young you are.

Sticking to your goals can be an upward battle, especially when you don’t see results right away.

Williams has found herself on the losing end of the set early on in the match and requiring two set wins to take the match. In these situations, she holds her head high and keeps fighting.

The important thing is not to throw in the towel just because the odds aren’t working in your favor and time is running out. As long as there’s still time on that clock, you’re still in the fight.

Serena was born in Saginaw, Michigan but her family relocated to Compton, California when Serena was 3 years old. Serena and her sister Venus learned the game on pothole-riddled tennis courts on streets wracked with drugs, homelessness, crime, and gangs.

They learned how to persevere against unlikely odds. If you also want to become the best at what you do, developing the right focus is essential.

How much is Venus Williams worth?

Venus Williams’ net worth is estimated to be $95 Million.

How old is Venus Williams?

How tall is Venus Williams?

Venus Williams is a name to reckon with.

Her excellence at the game is prominent from the fact that she not only bagged herself numerous victories and titles but went on to become the first African American to rank herself at the World No 1 position.

As of November 2022, Venus Williams’ net worth is estimated to be roughly $95 Million.

What do you think about Venus Williams’ net worth? Leave a comment below.