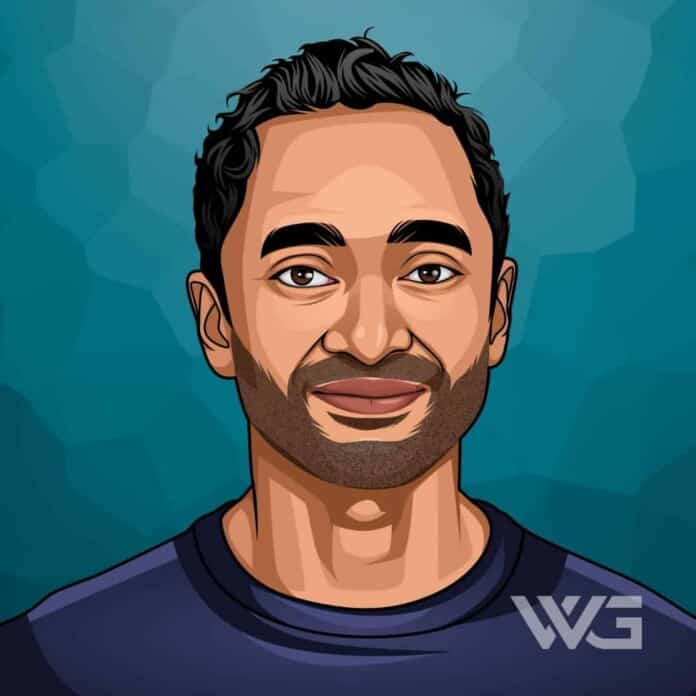 What is Chamath Palihapitiya’s net worth?

As of November 2022, Chamath Palihapitiya’s net worth is approximately $1 Billion.

Chamath Palihapitiya is a venture capitalist, engineer, and CEO of Social Capital. He was a senior executive at Facebook which he joined in 2007 and left in 2011.

Palihapitiya is a minority stakeholder and board member of the Golden State Warriors.

Chamath Palihapitiya was born on the 3rd of September, 1976, in Sri Lanka.

Palihapitiya moved to Canada when he was 6 years old with his family. His father was unemployed and his mother was a housekeeper. He attended Lisgar Collegiate Institute where he later graduated at the age of 17.

In 1999, he graduated from the University of Waterloo. He later moved to California to be with his then-girlfriend.

Palihapitiya began to work at AOL in 2004 where he became the vice president and general manager of AIM and ICQ.

He then began to work as a member of Facebook’s Senior Management. Palihapitiya quit his job at Facebook in 2011 to start his own fund venture.

He named the company Social Capital in 2015. Palihapitiya is also known for being the co-owner of Golden State Warriors and he is one of the founders of FWD.us.

As of November 2022, Chamath Palihapitiya’s net worth is $1 Billion.

Here are the best highlights of Chamath Palihapitiya’s career:

“The goal of a private company is, first, zero to one. Get past the product market fit, figure out whether people actually care about what you’re trying to build and someone will pay you money for that. That’s the zero to one problem. So scaling, one through N, is figuring out can you do that at scale and how big is the scale.” – Chamath Palihapitiya

“As you start the company, you start spending spending spending ahead of revenue but then you come out of it and very quickly you should become a company that spends less than it makes. And what I mean by very quickly, is that window of time should be in that 6 to 8 year time frame. And the reason is because if you build your business model correctly it’s almost unavoidable.” – Chamath Palihapitiya

What you should be in a rush for isn’t necessarily the immediate monetary return, but it’s to know that this equation existing between an employee and a company is being honored. What’s the equation? I’m going to give you my most precious thing that I have – my time and my reputation.” – Chamath Palihapitiya

View our larger collection of the best Chamath Palihapitiya quotes!

Now that you know all about Chamath Palihapitiya’s net worth, and how he achieved success; let’s take a look at some of his best lessons that we can learn from him:

We live our lives around a sense of perfection because we get rewarded in short term signals. We conflate that with value, we conflate it with truth, and what it really is is fake, brittle popularity that’s short term and leaves you even more vacant and empty before you did it.

Don’t confuse truth and popularity. You can use the money to amplify whatever you believe and get people to believe what is popular is now truthful. And what is not popular may not be truthful.

How much is Chamath Palihapitiya worth?

Chamath Palihapitiya’s net worth is estimated to be $1 Billion.

How old is Chamath Palihapitiya?

Chamath Palihapitiya was born on September 3, 1976, and is currently 46 years old.

How tall is Chamath Palihapitiya?

Chamath Palihapitiya is the CEO and founder of Social Capital. He was born in Sri Lanka and he later moved to Canada with his family. He has invested in many online ventures and small companies throughout his career.

As of November 2022, Chamath Palihapitiya’s net worth is roughly $1 Billion.

What do you think about Chamath Palihapitiya’s net worth? Leave a comment below.