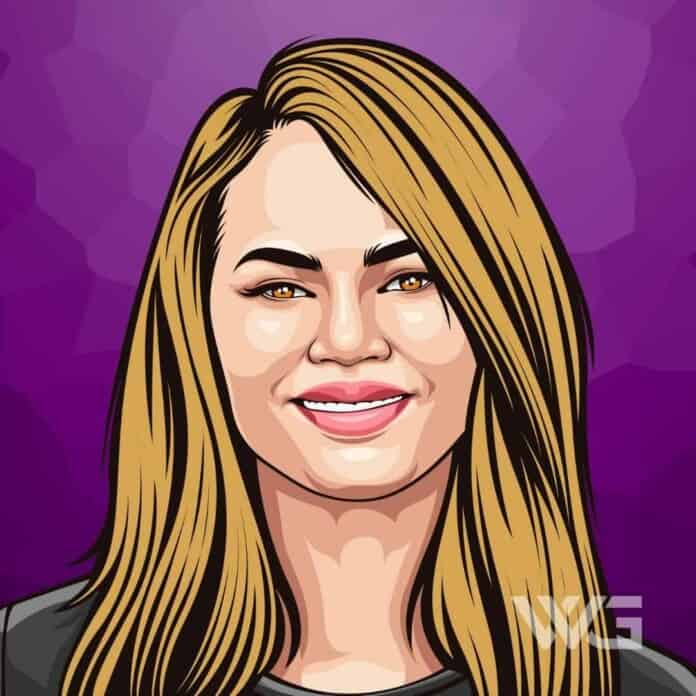 What is Chrissy Teigen’s net worth?

As of December 2022, Chrissy Teigen’s net worth is roughly $75 Million.

Christine “Chrissy” Teigen is an American model and author from Utah. Teigen made her debut in the annual Sports Illustrated Swimsuit Issue in 2010 and, alongside Nina Agdal and Lily Aldridge, appeared on the cover in 2014.

She formerly was a part of the lifestyle panel talk show FABLife and currently co-hosts Lip Sync Battle with LL Cool J on Paramount Network.

Christine “Chrissy” Teigen was born on the 30th of November, 1985, in Delta, Utah. Teigen’s mother is Thai and her father is of Norwegian descent. Her father worked as an electrician and the family moved often.

After living in Hawaii, Idaho, and Washington, the family eventually settled in Huntington Beach, California when Teigen was a teenager. She was discovered by a photographer while working in a surf shop.

Teigen’s professional journey began when she was spotted by a photographer in a surf shop where she was working when she was a teenager. In 2004, Teigen became an IGN Babe, and moving on she remained part of the American game show ‘Deal or No Deal’ as a substitute model during its second season in 2006-2007.

She graced the calendar cover of international men’s magazine ‘Maxim’ in July 2007. While modeling, she embarked into the world of television with channels like MTV, FUSE/MSG and ‘E!’ and worked as a contributor and recurring host.

She also made it to the cover of ‘Cosmopolitan’ and ‘Ocean Drive’ while featured in the editorials of other magazines like ‘Glamour’, Italian ‘Vogue’, ‘Galore’ and ‘Esquire’.

In February 2013, she and her fiancé, John Legend, featured in ‘Chrissy Teigen’s Hungry’ an additional ‘Cooking Channel’ special where they delved on a tasting spree to select their wedding menu.

Here are some of the best highlights of Chrissy Teigen’s career:

“I’ve always been kind of uncomfortable just on the beach in a swimsuit. I’m never my most confident in a bikini on the beach, especially when you know people are looking at you, and they expect one thing because of what they see in the magazines, and you might not look that way. It’s always been a scary thing for me.” – Chrissy Teigen

“I remember debating the finer points of flaky pastry with my chicken-pot-pie-obsessed American dad. I remember the divine mix of Thai food, TV dinners, and hearty, homemade goodness that have shaped this palate of mine to this day.” – Chrissy Teigen

“My day job may be exhausting, but cooking is my peace. My dream is to have a big family with lots of grandkids. And we’ll get together every Sunday for a hearty dinner at our house, and we’ll all live in flavorful bliss, happily ever after.” – Chrissy Teigen

“I was more active pregnant than I ever was not pregnant. I was doing Body By Simone five days a week. That definitely helped me shed the weight after giving birth. But it’s all smoke and mirrors, too. People on Instagram forget that you’re showing them what you want them to see. We have filters.” – Chrissy Teigen

Now that you know all about Chrissy Teigen’s net worth, and how she achieved success; let’s take a look at some of the best lessons we can learn from her:

1. Learn to laugh at yourself

No one can deny that Chrissy has a priceless sense of humor. One of the funniest things about her is her ability to laugh at herself. From acknowledging her awkward reaction face at the 2016 Oscars to reposting fans’ memes of her and John, she doesn’t take it too seriously and proudly laughs it all off.

Life is too short and we all make mistakes. So, laugh at the small things and grow from the big ones. If someone with more than 32 million followers across Instagram and Twitter can do it, so can you.

2. Stand Up For What You Believe In

When she’s not entertaining her social media audience with comical anecdotes (Chrissy Teigen’s 8-hour flight to nowhere live tweets) or posting the cutest videos of her kids, Chrissy is using her platform to stand up for what she believes in.

She is not scared to be brutally honest when she needs to be and take the negative hits from those who don’t stand with her. From clapping back to the trolls who critique her parenting style to taking a stance on larger social issues, she’s not worried about hurting others’ feelings to stand up for what she believes is right.

3. Wait For the Healthy Relationship You Deserve

Chrissy and John give us hope that the perfect couple does exist. Though just like any couple, they aren’t going to post their hard times and fights. We can tell what they do share that they truly love and adore each other.

They support and celebrate each other’s success, and are even confident enough in their relationship to poke a little fun at each other. They, my friends, are what we call couple-goals!

How much is Chrissy Teigen worth?

Chrissy Teigen’s net worth is estimated to be $75 Million.

How old is Chrissy Teigen?

How tall is Chrissy Teigen?

Chrissy Teigen is a well-known name in the world of entertainment today.

She started off her modeling career by sheer chance and things fell in place one after the other to weave her destiny the way it is today. She got her big break when she was featured in the 2010 Sports Illustrated Swimsuit Issue. Earning the name “Rookie of the Year”.

As of December 2022, Chrissy Teigen’s net worth is estimated to be roughly $75 Million.

What do you think about Chrissy Teigen’s net worth? Leave a comment below.

What is Brie Larson's net worth? Introduction  As of ,...