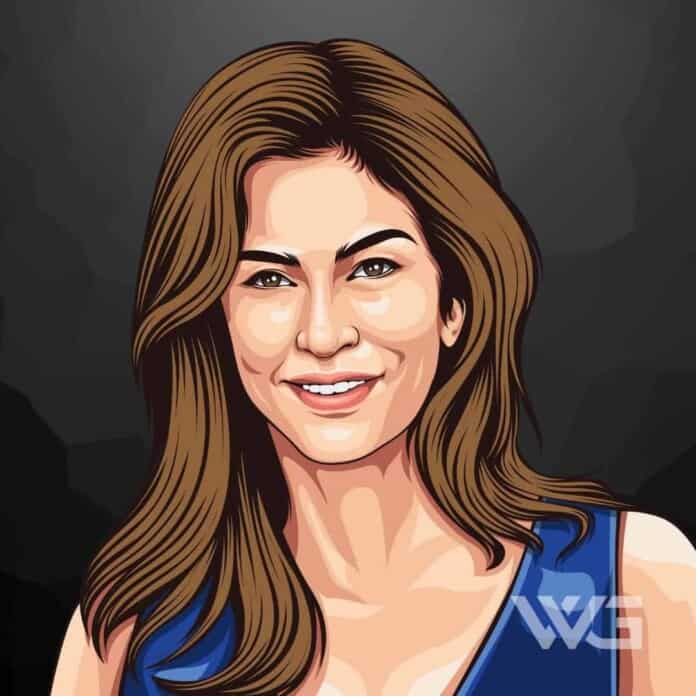 What is Cindy Crawford’s net worth?

As of February 2023, Cindy Crawford’s net worth is approximately $400 Million.

Cindy Crawford is an American model and actress from Illinois. Her years of success at modeling made her an international celebrity that has led to roles in television and film, and work as a spokesperson.

Cynthia Ann Crawford was born on the 20th of February, 1966, in Illinois. She claims to be of German, English and French descent. She was 16 when a newspaper photographer found her and took a photograph of her.

Following the contest, she became the face of the Elite modeling agency in Chicago. Cindy completed her education from DeKalb High School in 1984 and also received a scholarship in chemical engineering at Northwestern University.

Through the 1980s and 1990s, she became one of the most established supermodels and was often seen on the cover pages of fashion and lifestyle magazines like Vogue, W, People, Harper’s Bazaar, Elle, Cosmopolitan, and Allure.

In July 1988, she posed for Playboy magazine (for the first time) and posed once again, later that year, in a second shoot.

She hosted MTV’s ‘House of Style’, a show about the lives of models and the fashion industry, starting from 1989.

Crawford played the long lost love of singer Jon Bon Jovi in his video ‘Please Come Home for Christmas’ in 1994.
She came up with an exercise video ‘Cindy Crawford: Shape Your Body’, with Radu Teodorescu in 1992, which was hugely successful.

The success prompted her to make another sequel to her previous exercise video titled, ‘Cindy Crawford: The Next Challenge’ in 1993.

In 2005, she joined hands with famous Dr. Jean-Louis Sebagh to create her own line of beauty products, which she sold as ‘Meaningful Beauty’. She also launched her furniture line, ‘Cindy Crawford Home Collection’.

She launched her own home goods line with J. C. Penney Company, Inc., a chain of departmental stores, in 2009.

Here are some of the best highlights of Cindy Crawford’s career:

“I also turn to homeopathic remedies for the treatment of indigestion, travel sickness, insomnia, and hay fever just to name a few. Homeopathy offers a safe, natural alternative that causes no side effects or drug interactions.” – Cindy Crawford

“I believe that at least 70 percent of parenting goes to the mother. In our house, I’m the one who knows about all the school stuff, helps with the homework, organizes the play dates, and remembers the birthday parties.” – Cindy Crawford

“Nothing I have accomplished has given me more confidence than birthing my children at home naturally. I was so high after delivering my children-not just because I had a new baby, but because I was so proud of what my body (and mind) were able to do. I strongly encourage women not to give this power away.” – Cindy Crawford

“When you are getting ready to become a mom, being in love with someone just isn’t enough. You need to think about whether he would be a good parent and raise your children with similar beliefs.” – Cindy Crawford

“But I try to steal other moments. Sometimes I get up very early in the morning and enjoy a quiet house and a cup of tea before the craziness begins. Other times, I’ll take a quick walk on the beach. You can find peace in a few minutes.” – Cindy Crawford

Now that you know all about Cindy Crawford’s net worth, and how she achieved success; let’s take a look at some of the strongest lessons we can learn from her:

1. Less is More When it Comes to Skin

Those who are always in the public eye like models, celebrities, and even bloggers usually face tons of pressure to maintain a high level of attractiveness.

As a result, many often turn to plastic surgery or excessive makeup. What’s her secret? For one, she’s not afraid to age! Cindy emphasized wanting to look good but also looking her age. She takes great care of her skin with quality products and facials.

2. Never Speak Negatively About Yourself to Others

Cindy also advised to never speak negatively about yourself in front of your significant other or anyone else! We’re so hard on ourselves and most people will never notice our flaws.

Cindy spoke heavily about learning to prioritize by saying “no” more frequently. But take it from Cindy and accept that you cannot do it all. It’s important for your health and sanity to have time for yourself.

How much is Cindy Crawford worth?

Cindy Crawford’s net worth is estimated to be $400 Million.

How old is Cindy Crawford?

How tall is Cindy Crawford?

Cindy Crawford is one of the very few names, who have revolutionized the fashion industry.

Even today, years after she quit modeling, she is recognized as a fashionista. She is also a philanthropic involved in various charitable programs and also spreads awareness regarding various types of cancer.

What do you think about Cindy Crawford’s net worth? Leave a comment below.

Former world No. 1 tennis player Chris Evert has earned millions as one of the most talented players to ever step onto the court.