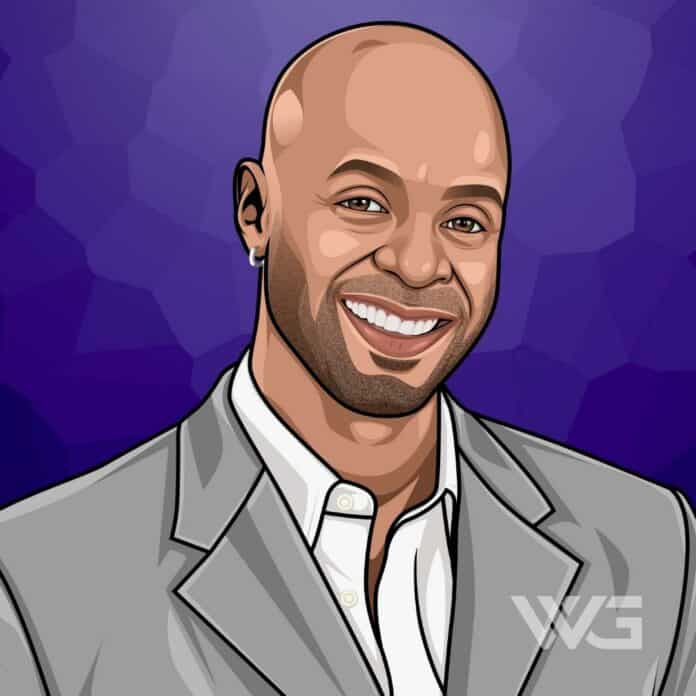 What is Jerry Rice’s net worth?

Jerry Rice is a retired American football player known for setting many records over the course of his career.

While playing with the San Francisco 49ers, he helped them win three Super Bowls, in addition to many league games.

Jerry Lee Rice was born October 13, 1962, in Starkville, Mississippi, and was raised by his father Joe, along with his seven siblings.

He played a variety of sports during high school and committed to playing football for Mississippi Valley State University in the early 1980s.

During his college football career, Rice broke several records, with his touchdown receptions in 1984 setting the NCAA record for every division.

After a hugely successful college career, Jerry Rice was signed to the San Francisco 49ers in 1985, winning two Super Bowls with the team in the following years.

By 1988, he had set records for receptions and touchdown numbers, which held fast until Larry Fitzgerald broke them in 2008.

Playing alongside Steve Young during the 1990s, Rice was named to the Pro Bowl and First-team All-Pro team, setting additional records at the Super Bowl.

After several seasons with the 49ers, Rice moved to the Oakland Raiders, facing off against Tom Brady and the New England Patriots and emerging victorious.

Rice’s late career saw him play with the Seattle Seahawks and Denver Broncos before finally retiring in 2005.

His post-retirement activities saw him make appearances on several television shows, including Dancing with the Stars and the sitcom, Rules of Engagement.

During his impressive career, Jerry Rice played for some of the richest NFL teams in the world, drawing an appropriately large salary.

While Rice’s current salary is unknown, his books and other business ventures mean he will still take home a comfortable income each year.

Jerry Rice’s lucrative contracts, brand endorsement deals, and other business ventures mean his net worth has grown continually throughout his career.

As one of the richest athletes in the world, he’s signed multiple contracts over the years that have proven to be incredibly lucrative.

His ongoing presence as a media personality and investments in real estate mean his net worth will remain high in the future.

In 1987, Jerry Rice married Jacqueline Bernice Mitchell, with whom he had three children before the couple divorced in 2007.

He made the news in 2016 after opposing Colin Kaepernick kneeling during the National Anthem, stating in a Twitter post, “All lives matter.”

Jerry Rice has been nominated and awarded many accolades for his outstanding track record as a professional football player.

It’s a fitting tribute to the performance of one of the richest NFL players in the world, reflecting his contributions to the sport.

Here are notable awards and accolades from Jerry Rice’s career:

Only a handful of professional football players have matched Rice’s impressive list of awards and honors.

We can expect more accolades to come in the future as other sporting institutions recognize Rice’s lasting impact on football.

How Does Jerry Rice Spend His Money?

Jerry Rice’s exceptional wealth means he can afford some of the most expensive houses in the world, and his property portfolio is as impressive as you’d expect.

He sold his Atherton Mansion in 2013 for $10.5 million, which featured a fully decked-out gym, large swimming pool, and home cinema.

Rice also owns a collection of cars, including a Rolls-Royce, Ferrari, and several classic automobiles.

Since beginning his college football career, Jerry Rice has enjoyed many highlights and notable successes.

Throughout his career, he’s broken several records and helped lead his teams to several significant victories in the sport.

Here are some of the best highlights of Jerry Rice’s career:

It’s an impressive shortlist of his many career high points from the player many consider to be the greatest wide receiver of all time.

Rice has been interviewed by the media on hundreds of occasions throughout his career, sharing his thoughts on his victories and losses.

He’s reflected on everything from his work ethic and parental influence to what he eats to stay in shape.

Here are our favorite quotes from Jerry Rice:

Now that you know all about Jerry Rice’s net worth let’s examine some of the ways his success can teach us valuable life lessons.

Rice’s commitment to improving his skills on a daily basis and becoming the best he can possibly serve as inspiration to anyone looking to succeed.

Here are some of the best success lessons to learn from Jerry Rice:

1. Dedicate Yourself To Improvement

When Rice was at the peak of his career, he would often run hill sprints after the team practice session ended.

You can always bring your dedication and commitment to the next level to achieve even better results.

2. Try To Win In All Aspects Of Your Life

Success should be sought after in everything you do, from your creative pursuits to the relationships you build with your family and colleagues.

When you apply a mindset of success in all aspects of your life, it creates a ripple effect through everything you do.

Jerry Rice was known for consistently turning up early for football practice, modeling the behavior he expected from his teammates.

If you want to help others improve their lives, start by leading by example.

That wraps up this complete guide to the professional career, championship victories, and net worth of American football player Jerry Rice.

His lasting legacy in the sport and place in the Hall of Fame speaks volumes about his dedication, commitment, and career success.

With his net worth likely to change, we’ll update this article in the future, so make sure you revisit it for the most up-to-date facts and figures.

What do you think about Jerry Rice’s net worth? Leave a comment below.