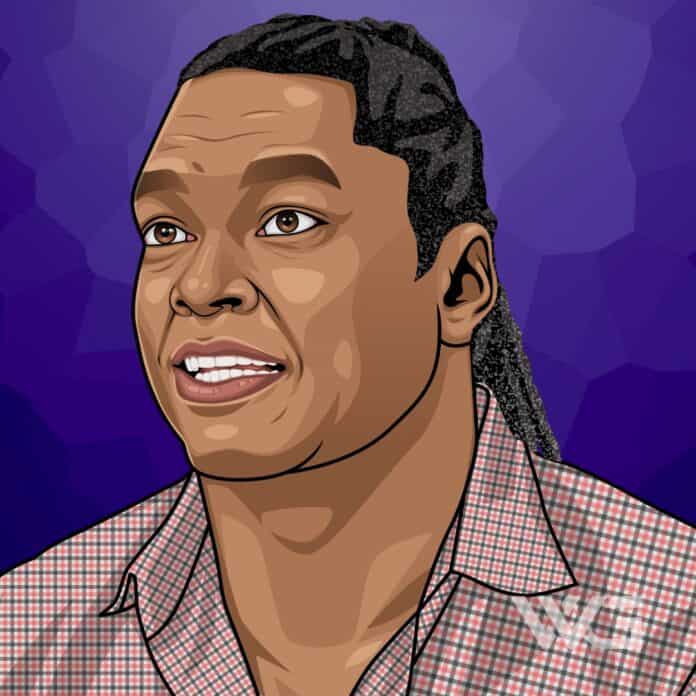 What is LaVar Arrington’s net worth?

LaVar Arrington is a retired professional football player who earned more than $44 million during the course of his football career.  He made a name for himself during his college career and is loved by fans all around the US.

He retired after 7 seasons in the NFL, playing for the Washington Redskins and then the New York Giants, and is now a media personality, commentating and analyzing football games on television.

As of January 2023, LaVar Arrington’s net worth is estimated to be $45 Million.

He participated in both basketball and football in the running back and linebacker positions at Pittsburgh’s North Hills Senior High School.

With 4,357 yards on 711 runs and 72 touchdowns, he became the second player in Pennsylvania Class 4-A history to surpass 4,000 career yards rushing.

Arrington participated in the 1997 Big 33 Football Classic, an annual contest between the top high school football players from Pennsylvania and Ohio.

He also had interest from basketball teams at Georgetown, UMass, and North Carolina due to his height and agility.

Arrington, a talented sprinter as well, competed for the school’s track and field team and set personal bests in the 100- and 200-meter races.

As an all-around athlete, he had top scores in the high jump and long jump of 1.96 meters and 6.76 meters, respectively.

Arrington played for the Penn State Nittany Lions football team under coach Joe Paterno, from 1997 to 1999 as a student at Penn State University.

During his time in college, Arrington won several awards, including the Lambert Award in 1999, the Dick Butkus Award, and the Chuck Bednarik Award.

After his junior year, he departed Penn State to register for the NFL draft.

Arrington played for the Washington Redskins from 2000 to 2005 after being selected as the second overall choice in the 2000 NFL Draft.

He joins Albert Haynesworth, Kirk Cousins, Alex Smith, and other top athletes who played for the Redskins.

He, unfortunately, suffered an Achilles rupture in week seven against the Dallas Cowboys, which forced him to miss the rest of the season. This led to the New York Giants dismissing him on February 12, 2007.

Bad luck seemed to follow Arrington, as he was hurt badly in a motorbike accident in suburban Maryland on June 18, 2007.

He also received two citations for operating a vehicle without a class license and for failing to manage speed to prevent a collision.

His retirement was confirmed in a New York Daily News report on September 23, 2007.

LaVar started his career with high hopes as he was both big and agile and had incredibly quick feet.

Unfortunately, his career was cut short by both a sports injury to his Achilles tendon and his injuries suffered during his high-speed motorcycle accident.

He made a substantial amount of money in his seven seasons in the NFL and was able to invest his money wisely.

However, he wanted to continue with football in some fashion and settled on commentating as a natural progression.

After earning over $40 million, LaVar was able to increase his wealth by investing in restaurants and making TV appearances.

After starting as a pregame and postgame commentator for Comcast SportsNet on a part-time basis, he was hired as a full-time member of the Comcast team in October 2007.

Here’s a breakdown of LaVar Arrington’s annual net worth:

Following his successful transition to his media role, LaVar started on a radio talk show and then hosted his own weekly sports show.

In 2008, not prepared to slow down, Arrington established Leap Management, LLC, a sports agency.

LeVar Burton, who portrayed Kunta Kinte in the 1977 television miniseries Roots, was the inspiration for LaVar Arrington’s name.

Eric, his younger brother, and Michael, his older brother, both played basketball for Slippery Rock University but didn’t follow LaVar into the NFL.

After retiring from the military, his father, Michael, was ordained as a priest. In the Pittsburgh public school system, his mother, Carolyn, teaches special education.

He had an appearance on a 2002 edition of the TLC show, While You Were Out, where he assisted his brother Michael in re-modeling a room.

With his intimate knowledge of the sport, Arrington was asked to participate in ESPN’s “Dream Job”, as a judge.

Despite his short time in the NFL, LaVar was able to make a lasting impression and was recognized for his contribution to the sport.

If he had not been involved in the high-speed motorcycle accident, there is no doubt that he would have gone on to have a long and very successful career in the sport.

Here are some of the finest moments from LaVar Arrington’s career:

To resolve issues with the Washington Redskins, Arrington bought his free agency from the Redskins for $4.4 million in March 2006.

After protracted negotiations, LeVar and the New York Giants, home to Saquon Barkley and Sterling Shepard, reached a seven-year, $49 million contract in April 2006.

However, this contract was cut short due to his leg injury and then his horrendous motorcycle crash in 2007.

How Does LaVar Arrington Spend His Money?

Arrington then established the cutting-edge football training program, Xtreme Procision (XP), in 2010 intending to create the next generation of football players.

After eating at some of the most expensive restaurants in the world, Arrington put up the money to establish The Sideline restaurant, in Landover, Maryland.

A dispute that resulted in a shooting just outside the restaurant’s main entrance in March 2009 left one man dead and six other people wounded.

The restaurant lasted for two years, but in December 2009, the establishment closed due to bankruptcy.

He also owned some of the most expensive motorcycles in the world, but since his accident, he is less likely to be seen riding one.

LaVar made his most memorable play for the Nittany Lions against Illinois when he anticipated the snap count on a fourth-and-short-yardage play.

Arrington leaped over the offensive line to stop the runner in the backfield, a play that is still talked about today.

Here are some of the best highlights of LaVar Arrington’s career:

LaVar’s memorable play was afterward dubbed “The LaVar Leap” and many people mentioned Arrington as a potential Heisman Trophy contender.

His propensity for spectacular plays and his cover appearance in Sports Illustrated’s 1999 College Football Preview Issue added fuel to the fire.

He prides himself on being loyal and will put away his trophies and not display them, to prove his sentiments.

Here are our favorite quotes from LaVar Arrington:

LaVar just wanted to see the Washington Redskins win, and that was all he focused on.

He wasn’t concerned about where the coach put him or what was required of him, he just wanted victory after six seasons without a major win.

LaVar Arrington was brought up in a home with a military father and a school-teaching mother, whom both instilled a sense of loyalty in him.

He felt that it was the least he could do, by being loyal to the team and his coach, in response to their trust in him to get the job done.

2. Be Realistic About Life

Arrington had a promising career in football ahead of him when he was stricken with first a serious leg injury and then a life-threatening motorcycle accident.

Through all that, he remained programmatic about his circumstances and made the best of the bad hand that Lady Luck had dealt him.

3. Be Careful Of What You Say Out Loud

LaVar was misunderstood on some occasions due to his passion for the game and his team.

In retrospect, he feels that some of the things he said in the heat of the game or after it, were best left unsaid, but they were what he felt at the time and they can’t be taken back.

LaVar Arrington was a feared linebacker in the late 1990s, famous for his “LaVar Leap” where he would jump over the offensive line to attack the ball carrier.

He was successful on and off the pitch with his investments in businesses, helping the development of the next generation of footballers.

LaVarr has now transitioned to a successful career behind the microphone, hosting radio shows and commentating and analyzing NFL matches with his unique perspective.

As of January 2023, LaVar Arrington’s net worth is estimated to be $45 Million.

What do you think about LaVar Arrington’s net worth? Leave a comment.