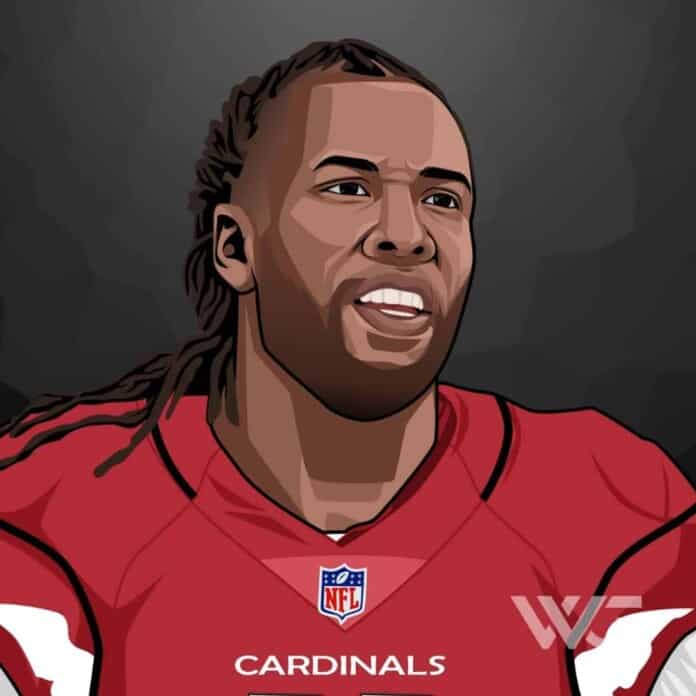 What is Larry Fitzgerald’s net worth?

Larry Fitzgerald is an American football wide receiver for the Arizona Cardinals of the NFL. He played college football at Pittsburgh, where he earned unanimous All-America honors. He was drafted by the Cardinals third overall in the 2004 NFL Draft.

As of December 2022, Larry Fitzgerald’s net worth is roughly $50 Million.

Larry Fitzgerald was born on the 31st of August, 1983, in Minneapolis, Minnesota. His father, Larry Fitzgerald Sr., serves the ‘Minnesota Spokesman-Recorder’ as a sportswriter; he became the first reporter to cover his own son in a ‘Super Bowl.’

He lost his mother to a brain hemorrhage in 2003, while she was undergoing breast cancer treatment.

During the 2004 NFL Draft, he was drafted third overall by the Arizona Cardinals.

Larry made his NFL debut on September 12 that year against St. Louis Rams. He became the youngest player at 21 years and 110 days to set a record of scoring at least two touchdown receptions in a single game.

The 2008 season proved as one of the most successful seasons for Larry. He finished it with 96 receptions for 1,431 yards and a league highest of 12 touchdowns.

His performance in the 2009 season (including 97 receptions for 1,092 yards and 13 touchdowns) got him his third consecutive Pro Bowl and overall fourth of his career.

The ‘Cardinals’ signed a one-year and $11 million contract extension with him on August 5, 2016. Although he was named in his eleventh Pro Bowl on December 19 that year, later it was declared that Larry would be replaced by Seattle Seahawks’ Doug Baldwin.

Here are some of the best highlights of Larry Fitzgerald’s career:

“I’m honest with myself how I feel. If I feel good, I feel good. If I don’t – if I’m right – I don’t just try to muscle through everything, because you’ve got to be a little bit smarter.” – Larry Fitzgerald

“I do what I’m coached to do. That’s part of being a team leader and captain. The job will change week in and week out, and it’s not for you to question what your job is – it’s to go out there and execute your assignments.” – Larry Fitzgerald

“When it’s time to focus in and play ball during the season, 100% of my focus is on that. When it’s the offseason and I’ve got time to be away and I can do other interests – they don’t conflict. I’m good at compartmentalizing. I can put everything in its appropriate box at the time and open it up when I need to at a later time.” – Larry Fitzgerald

“I really enjoy my philanthropic work, traveling around the world and helping people in need. That’s a lot of fun for me. It’s really rewarding. You’re helping people, but it’s helping you. It puts life in perspective.” – Larry Fitzgerald

Now that you know all about Larry Fitzgerald’s net worth, and how he achieved success; let’s take a look at some of the lessons we can learn from him:

1. Achieve What You Want

2. Never Let Anything Distract You

You can never let anything distract you from your main objective. Your only goal is to be great. Greatness is something nobody can ever take away from you, no matter what happens.

Chess is a lot of fun for me. Football is a physical game, and in chess, you can just beat someone mentally – you outwit somebody, outmaneuver them, think ahead of them.

How much is Larry Fitzgerald worth?

Larry Fitzgerald’s net worth is estimated to be $50 Million.

How old is Larry Fitzgerald?

How tall is Larry Fitzgerald?

He became ‘Big East Offensive Player of the Year’ and received the ‘Fred Biletnikoff Award’ and the ‘Walter Camp Award’ in 2003.

As of December 2022, Larry Fitzgerald’s net worth is estimated to be $50 Million.

What do you think about Larry Fitzgerald’s net worth? Leave a comment below.