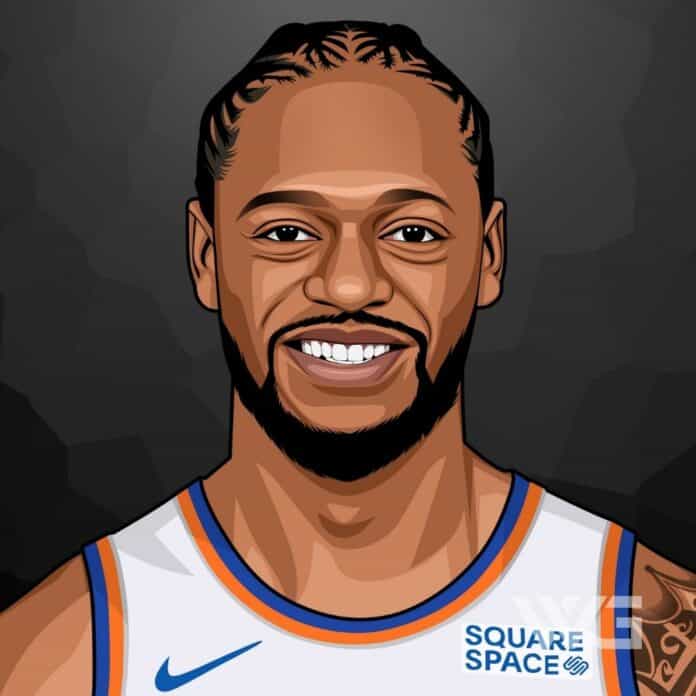 What is Julius Randle’s net worth?

Julius Deion Randle is the current power forward and center for the New York Knicks, but he started his career in 2012 after being drafted by the Los Angeles Lakers.

During his career, he has won numerous awards and honors while distinguishing himself on the court with his play style.

Although he has been playing for a while, Randle has no plans of retiring any time soon, so we can expect to see much more from him in the future.

As of February 2023, Julius Randle’s net worth is estimated to be $25 Million.

Julius Randle was born Novemeber 29, 1994, in Dallas, Texas, and he grew up to attend Prestonwood Christian Academy in Plano.

During his high school basketball career, he was considered to be one of the top five players in his class, and he was listed as a five-star recruit and the No. 1 power forward in the nation.

While he was scouted by many colleges and universities, he ultimately committed to Kentucky in 2013, where he was named one of the semi-finalists for the Naismith College Player of the Year award.

During his college basketball career, he helped the Kentucky Wildcats reach the national championship game, but the following year he declared himself for the 2014 NBA draft, forging his three final years of college eligibility.

Julius Randle was selected by the Los Angeles Lakers as their seventh overall pick, but after making his official debut with the team, he ended up breaking his right tibia 14 minutes into the game. This injury sidelined him for the remainder of his rookie season.

He returned to the court in 2015 for the Lakers’ Summer League and recorded his first career triple-double, making him the youngest Lakers player to earn one since Magic Johnson in 1980.

Randle remained with the Los Angeles Lakers until 2018, when he was signed by the New Orleans Pelicans for two years.

While he played well in New Orleans, he only remained with them for a single season before becoming a free agent.

In 2019, he was signed for three years by the New York Knicks, and in 2021 he scored a career-high seven three-pointers with the team.

By the end of the regular season, he was named the NBA Most Improved Player and named to the All-NBA Second Team as their forward.

Julius Randle has quickly surpassed Gilbert Arenas and Trae Young in total net worth, and his salary has only continued to increase.

Having benefited from some substantial contracts, Randle is poised to continue growing his fortune for many more seasons to come.

He may not be one of the richest NBA players in the world currently, but he is well on his way to breaking into the exclusive tier.

We wholly expect to see his earnings continue to increase as he remains one of the most talented players in professional basketball.

Julius Randle is currently married to Kendra Shaw, and the couple has two children, Kayden and Jayce.

Randle also has his own official TikTok account, which he uses to post videos with his kids and his time off the court.

Although he doesn’t often talk about his personal life, you can still catch glimpses of what he does off the court through his many social media profiles.

Like Khris Middleton and Nikola Jokic, Julius Randle has earned many awards during his professional career with the NBA.

While all of his accolades and honors are important, we’ve chosen to highlight some of the most important he’s earned during his time on the court.

Here are some of Julius Randle’s most significant awards and accomplishments:

Although these are just a few of the awards and honors he has won, they are the ones that have been the most prestigious.

He may not yet be as decorated as Chris Bosh or DeAndre Jordan, but in a few more seasons, he may very well reach their level.

How Does Julius Randle Spend His Money?

After joining the New York Knicks, one of the richest NBA teams, Randle left his $3.1 million mansion in Louisiana for a home closer to his new team.

This French Provincial-style mansion may not be one of the biggest houses in the world, but it certainly exudes luxury and was originally purchased by Randle in 2018 for just under $3 million.

It boasts five bedrooms, five bathrooms, and 7,721 sqft of modern living space, including a large backyard patio with a pool and spa.

Julius has also invested in some of the most expensive cars in the world, including a Mercedes Benz G-Class 550 and a black Cadillac Escalade.

While we don’t yet know what his new house cost him, seeing as it is in or near one of the most expensive cities in the US, we can assume it is both pricey and extravagant.

There are a lot of moments that have stood out during Julius Randle’s career, but some have impacted his success more than others.

We’ve chosen to highlight some of Randle’s biggest and most important milestones, so you can understand how he’s been able to achieve so much.

Here are some of the best highlights of Julius Randle’s career:

These career highlights represent the main turning points of his career and the moments that helped set the course of his success.

As he continues playing, it is likely we will see him become as wealthy and well-known as Dirk Nowitzki, if not even more so.

Julius Randle has dedicated his life to consistently improving himself as a player, and he doesn’t have plans to stop anytime soon.

However, while he is an exceptional player, he also knows the value of teamwork and always emphasizes the importance of supporting the other players around him.

Here are our favorite quotes from Julius Randle:

There is a lot that we can learn from Julius Randle and his impressive career as one of the most talented players in the NBA.

Now that you know all about Julius Randle’s net worth, we can take a closer look at what he can teach us about reaching our own goals.

Here are some of the best success lessons to learn from Julius Randle:

You should always set larger goals to try and reach, but that doesn’t mean you should wholly focus on them.

Instead, put your energy toward smaller, more achievable things in the short term that can help you ultimately make progress toward your bigger goals.

2. Find The Positives In The Negatives

There is always a silver lining to every negative thing if only you are willing to look for it. However, this can be easier said than done.

Although it isn’t always easy in the moment to stay positive, it can be incredibly useful and help you to stay motivated even when things go wrong.

Hard work doesn’t automatically mean success, but this doesn’t mean you should let yourself become discouraged.

Julius Randle has built himself up to be one of the most popular players in the NBA, and he has no plans of stepping away from the court anytime soon.

Thanks to his skills, he has earned a substantial net worth while also securing a lasting basketball legacy that will be remembered for generations.

Make sure to check back often so you won’t miss any important updates to Randle’s ongoing career and growing fortune.

As of February 2023, Julius Randle’s net worth is estimated to be $25 Million.

What do you think about Julius Randle’s net worth? Leave a comment below.

Junior Dos Santos came to the UFC at a young age and became one of the highest-paid members of the company's heavyweight division.