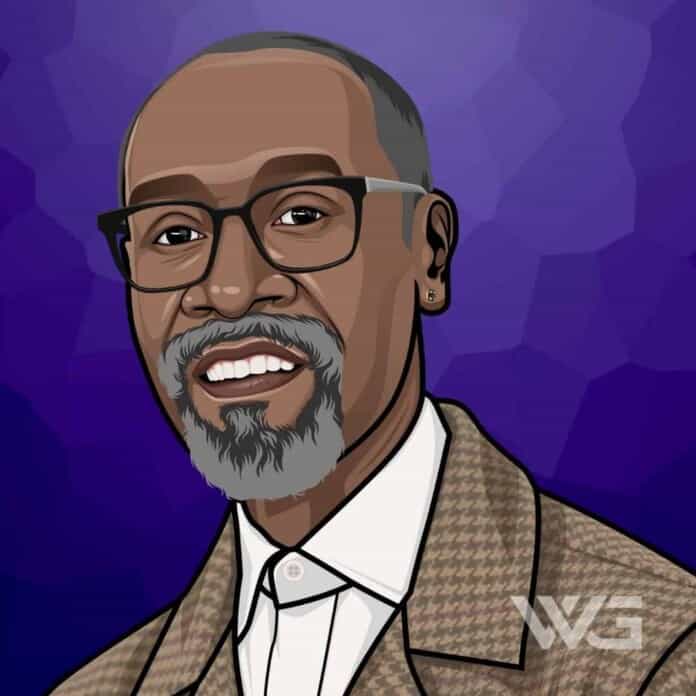 What is Don Cheadle’s net worth?

Don Cheadle is an American actor and filmmaker.

Cheadle has built his career in the 1990s with roles in ‘Devil in a Blue Dress,’ ‘Rosewood,’ and ‘Boogie Nights’. His collaboration with director Steven Soderbergh resulted in the films ‘Out of Sight’, ‘Traffic,’ and ‘The Ocean’s Trilogy.

Donald Frank Cheadle Jr. was born on the 29th of November, 1964, in Missouri.

Cheadle is the son of Bettye and Donald Frank Cheadle Sr. His family moved from city to city throughout his childhood.

In 1982, Cheadle graduated from East High School in Denver. During high school, he played saxophone in the jazz band, sang in the choirs, and was active in the theater department, performing in musicals, plays, and mime shows.

Cheadle had a role in ‘Picket Fences’ and followed it with performances in ‘Devil in a Blue Dress,’ Rosewood’ and ‘Boogie Nights.

He soon began to work with director Steven Soderbergh and appeared in the movies ‘Out of Sight’, ‘Traffic’ and ‘Ocean’s Eleven.’

In 2004, he had a lead role as the Rwandan hotel manager Paul Rusesabagina in the genocide drama film ‘Hotel Rwanda’ earned him a nomination for an Academy Award for Best Actor.

In 2007, he and fellow actor George Clooney were presented with the Summit Peace Award by the Nobel Peace Prize Laureates in Rome for their work to stop the genocide and relieve the suffering of the people of Darfur.

He was then cast on the sitcom ‘House of Lies’ to win a Golden Globe Award. He was nominated again for the series in 2013 and 2014.

How Does Don Cheadle Spend His Money?

Don Cheadle spends some of his money on real estate and charity work.

Cheadle owns a beautiful home in Santa Monica. It comes with four bedrooms and six bathrooms.

Here are some of the best highlights of Don Cheadle’s career:

“It’s the sense of touch. In any real city, you walk, you know? You brush past people, people bump into you. In L.A., nobody touches you. We’re always behind this metal and glass. I think we miss that touch so much, that we crash into each other, just so we can feel something.” – Don Cheadle

“President Obama inherited a broken country mired in two wars, a financial crisis, a mortgage mess and more than we all probably even know about and has, in my opinion, brought us back from the brink. But I still see my friends in no better shape and the gap widening.” – Don Cheadle

“I also believe that you are what you have to defend, and if you’re a black man that’s always going to be the bar against which you are judged, whether you want to align yourself with those themes or not. You can think of yourself as a colorless person, but nobody else is gonna.” – Don Cheadle

“I started following the news and seeing what was happening around the world with the polar ice caps melting and temperatures breaking records. I became concerned as an animal on this planet but also as a father.” – Don Cheadle

“Now is a good time, 10 years ago would have been a good time, and 10 years from now it will still be a good time to see a dynamic, entertaining movie that’s wall-to-wall Miles Davis where the music will hopefully spark some desire to know more about the man.” – Don Cheadle

Now that you know all about Don Cheadle’s net worth and how he achieved success; let’s take a look at some of the lessons we can learn from him:

Living by example – that’s always a better teacher than trying to preach.

Speak up when you’re supposed to, as opposed to trying to write prescriptions for the way people should live.

You should do what you’re supposed to do and hope that that ripples out.

How much is Don Cheadle worth?

Don Cheadle’s net worth is estimated to be $40 Million.

How old is Don Cheadle?

How tall is Don Cheadle?

Don Cheadle is an American actor. Cheadle entered the California Institute for the Arts in Valencia, California, in 1982, where he received a rigorous education in classic theatre.

He quickly found work in television, appearing in small parts on shows such as ‘Fame,’ ‘L.A. Law’ and ‘Hill Street Blues’.

What do you think about Don Cheadle’s net worth? Leave a comment below.