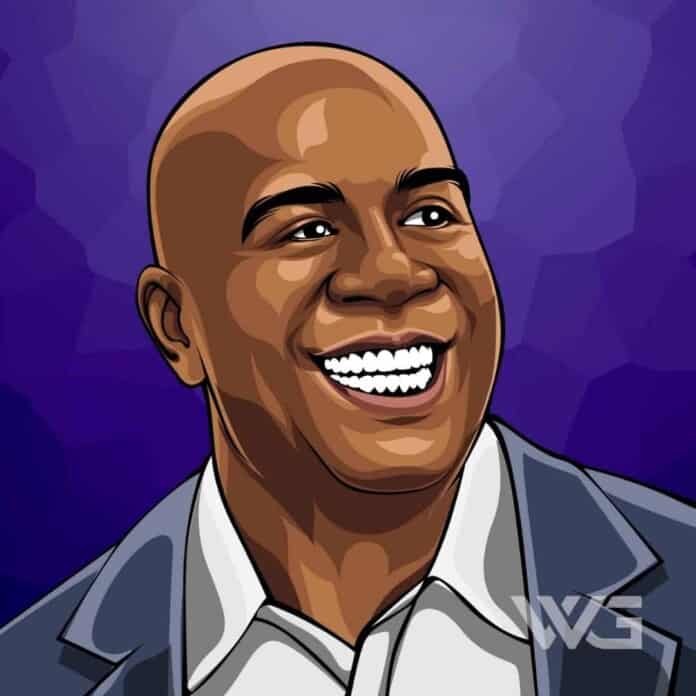 What is Magic Johnson’s net worth?

As of February 2023, Magic Johnson’s net worth is approximately $620 Million, and he’s one of the richest athletes in the world.

Earvin “Magic” Johnson Jr. is an American retired professional basketball player and former president of the Los Angeles Lakers of the NBA. He played point guard for the Lakers for 13 seasons. After winning championships in high school and college, Johnson was selected first overall in the 1979 NBA draft by the Lakers.

Earvin Johnson Jr. was born on the 14th of August, 1959, in Lansing, Michigan. Johnson is the son of Earvin Sr. and Christine Johnson.

His mother spent many hours after work each night cleaning their home and preparing the next day’s meals, while his father did janitorial work at a used car lot and collected garbage, all while never missing a day at General Motors.

Johnson was drafted first overall by the Los Angeles Lakers in 1979. He ended up signing a  25-year $25-million contract with the Lakers. Johnson performed exceedingly well in the 1981–82 season and averaged 18.6 points, 9.6 rebounds, 9.5 assists, and a league-high 2.7 steals per game.

An incident in 1991 changed his life forever; he was diagnosed with HIV infection. He publicly announced his diagnosis and decided to retire. In spite of his retirement, he was chosen to compete in the 1992 Summer Olympics for the US basketball team.

He made a comeback as a player by re-joining the Lakers during the 1995–96 NBA season. In February, he scored 15 points, along with 10 rebounds and 13 assists in a victory against the Atlanta Hawks. He averaged 14.6 points, 6.9 assists, and 5.7 rebounds per game in 32 games in the season. He then retired for good following the season.

Here are some of the best highlights of Magic Johnson’s career:

“Everyone thought I was going to die like a year later, they didn’t know. So I helped educate sports, and then the world, that a man living with HIV can play basketball. He’s not going to give it to anybody by playing basketball.” – Magic Johnson

“Being able to touch so many people through my businesses and make money while doing it, is a huge blessing.” – Magic Johnson

“As an athlete, I understood the value of my health insurance. I knew that in my profession, injuries were common and could happen at any time.” – Magic Johnson

“Any guy who can maintain a positive attitude without much playing time certainly earns my respect.” – Magic Johnson

“I really want people to know that I’ve worked hard, very hard, to get to where I am today.. this didn’t just happen overnight. I started in business over 25 years ago and have found a way to build on what I’ve learned through every partnership and opportunity.” – Magic Johnson

Now that you know all about Magic Johnson’s net worth, and how he achieved success; let’s take a look at some of the best lessons we can learn from him:

1. Make Some Time for Yourself

If you don’t make the time for yourself to get inspired, no one around you will ever be inspired.

Have the discipline to clean out all the energy-draining people in your life. You really do rise or fall to the level of your associations.

Doing huge dreams we have never done can be frightening. Yet when we push to the edges of our limits, our limits expand.

How much is Magic Johnson worth?

Magic Johnson’s net worth is estimated to be $620 Million.

How old is Magic Johnson?

How tall is Magic Johnson?

Magic Johnson is a retired American professional basketball player, counted among the greatest basketball players of all time. Johnson is famous for his powerful arms, agility, and speed that helped him become one of the most formidable players in the world during the 1980s.

What do you think about Magic Johnson’s net worth? Leave a comment below.

As a major championship winner, professional golfer Padraig Harrington has made a fortune on the PGA and European tours.