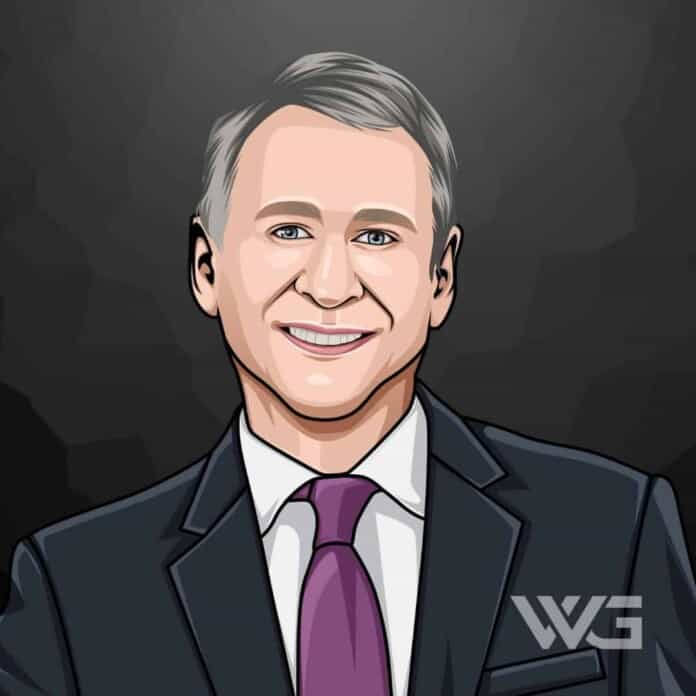 What is Ken Griffin’s net worth?

Ken Griffin is an American hedge fund manager and billionaire. Griffin is the chief executive of the investment firm Citadel, which he founded in 1990. Citadel operates with an estimated $32 billion in investment capital.

Kenneth Cordele Griffin was born on the 15th of October, 1968, in Daytona Beach, Florida. In high school, he excelled academically while also was president of his math club. In 1986, Griffin started to invest during his freshman year at Harvard University.

During his second year at Harvard, he started a hedge fund focused on convertible bond arbitrage. The fund was capitalized with $265,000 from friends and family, including money from his grandmother.

After graduating from Harvard, Frank C. Meyer, an investor, and founder of Glenwood Capital LLC, provided Griffin with $1 million to invest. Griffin exceeded Meyer’s expectations and, according to The New York Times, Meyer made a 70 percent return on the investment.

In September 2004, Fortune magazine ranked Griffin, who was 35 that year, as the eighth richest American under forty in the category of self-made, United States-based wealth. In 2006, Griffin was the fifth youngest of the seven members under the age of 40 listed on the Forbes 400.

Citadel received a “Top 10 Great Workplaces in Financial Services” ranking by the Great Places to Work Institute in 2015, based on a survey by Citadel employees. Griffin was credited for implementing a collaborative work culture and providing perks to employees including free lunch, museum tours, fitness programs, and personal gifts.

Here are some of the best highlights of Ken Griffin’s career:

“Every organization has two choices. Choice one is to grow. Choice two is to die. If you decide not to grow, it’s a clear-cut message to talented people that it’s time to leave.” – Ken Griffin

“My advice to every student who is trying to decide for the years immediately after graduation: take the opportunity that in your mind is the most rewarding, that you are most passionate about and that you find most interesting and save the rest of your life for being risk-averse. Whatever you want to do, this is the time to pursue it. Twenty years from now, your freedom to take risks will be limited.” – Ken Griffin

“We’re subject to the same forces of capitalism that have built the entire American economy. Strong returns induce more capital flow, which creates more competitors, and you have to evolve and get better, or you die.” – Ken Griffin

Now that you know all about Ken Griffin’s net worth, and how he achieved success; let’s take a look at some of the lessons we can learn from him:

1. Start As Early As You Can

Ken Griffin started his investment firm when he was a college student in 1987.  Start as early as you can if you have dreams of making it big in the financial market. Even if you have just $1000, you can get started right now! As your reputation grows, you will then attract more money.

In the financial market, you will make losses at times, this is inevitable. All investors have made their losses in the past. How you adapt to the losses is what matters. So far, Ken Griffin has already recovered from his losses and his fund is doing better than ever.

In any career path you follow, change is inevitable. If you decide to get into trading or investments, you will find that the industry is very change-oriented.  Adapting to change will help you become a better trader.

How much is Ken Griffin worth?

Ken Griffin’s net worth is estimated to be $28 Billion.

How old is Ken Griffin?

How tall is Ken Griffin?

Ken Griffin is an American entrepreneur who began trading while in college and had amassed a million dollars by the time he graduated. He launched his own hedge fund company, Citadel LLC, in 1990.

What do you think about Ken Griffin’s net worth? Leave a comment below.

Dominican professional basketball player Chris Duarte has just started his career in the NBA, but he has already earned an astonishing milt-million dollar net worth.