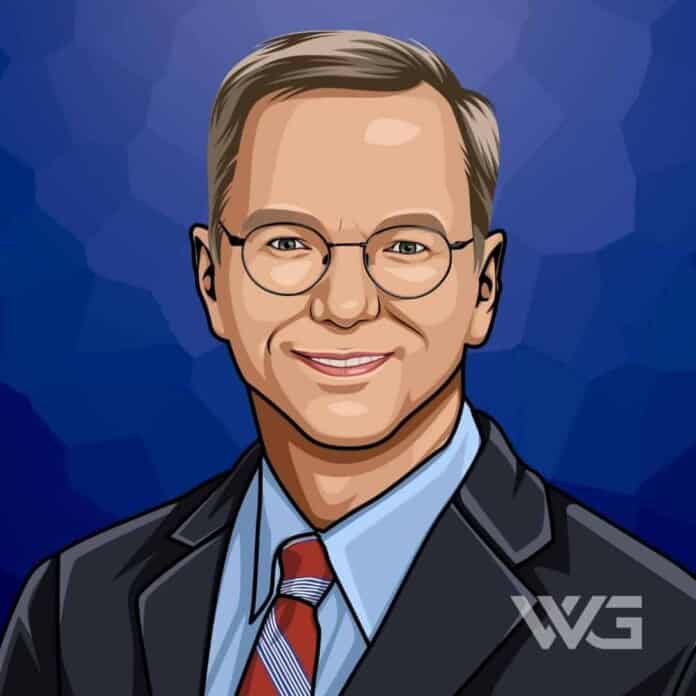 What is Eric Schmidt’s net worth?

Eric Schmidt is an American businessman and software engineer.

He is currently a technical advisor to Alphabet and chair of the US Department of Defense’s Defense Innovation Advisory Board. Schmidt is best known for being the CEO of Google from 2001 to 2011, executive chairman of Google from 2011 to 2015.

Schmidt is the son of Eleanor and Wilson Emerson Schmidt.

He was an intelligent and athletic boy who performed well in school and was a long-distance runner. He graduated from Yorktown High School in Arlington, Virginia, in 1972.

One of the initial jobs he held was at the Bell Labs. There he worked alongside Mike Lesk to rewrite Lex, a program to generate lexical analyzers for the Unix computer operating system.

He joined Sun Microsystems as its first software manager in 1983. He possessed great technical knowledge and a high degree of business acumen and rose through the ranks in the company.

Schmidt eventually rose to become the vice president of the general systems group and president of Sun Technology Enterprises. By the late 1990s, he had gained a reputation as a highly efficient business executive.

In 2011, Page replaced Schmidt as the CEO and Schmidt continued as the executive chairman of the company. In this position, he was responsible for building partnerships and broader business relationships, and government outreach. He also advised the CEO and senior leadership on business and policy issues.

In 2015, Google underwent a major corporate restructuring that culminated in the creation of Alphabet Inc. as the holding company to directly own several companies that were owned by or tied to Google, including Google itself. Schmidt was named Alphabet’s executive chairman.

Here are some of the best highlights of Eric Schmidt’s career:

“The characteristic of great innovators and great companies is they see a space that others do not. They don’t just listen to what people tell them; they invent something new, something that you didn’t know you needed, but the moment you see it, you say, ‘I must have it.’” – Eric Schmidt

“You can understand the Tunisia revolution as a failure to censor the internet. And Libya had that failure too. It’s very difficult for governments that are autocratic and don’t have broad popular support to be in power when a lot of people have these devices. That was what the Arab Spring was about, that people could express this and lead to revolution.” – Eric Schmidt

“For those who say you’re thinking too big… be smart enough not to listen. For those who say the odds are too small … be dumb enough to give it a shot. And for those who ask, how can you do that?… look them in the eyes and say, I’ll figure it out.” – Eric Schmidt

“Even if it’s a bit edgy, a bit out of your comfort zone, saying yes means that you will do something new, meet someone new and make a difference in your – and likely in others’ lives as well. Yes is what keeps us all young. It’s a tiny word that can do big things. Say it often.” – Eric Schmidt

Now that you know all about Eric Schmidt’s net worth, and how he achieved success; let’s take a look at some of the lessons we can learn from him:

1. Big Breaks Are Few And Far Between

The key is to show up and do the work every single day, even if it doesn’t look like you’re making any headway.

2. Learn To Trust Yourself

Learning to trust yourself is another one of the major lessons on leadership that your business cannot live without.

3. Learn To Listen To Other People

If you really want to succeed, you’re going to have to learn how to listen to other people.

How much is Eric Schmidt worth?

Eric Schmidt’s net worth is estimated to be $23 Billion.

How old is Eric Schmidt?

How tall is Eric Schmidt?

Eric Schmidt is an American software engineer who is currently serving as the executive chairman of Alphabet Inc., the holding company created to directly own several companies that were owned by or tied to Google, including a slimmed-down version of Google itself.

As of February 2023, Eric Schmidt’s net worth is approximately $23 Billion.

What do you think about Eric Schmidt’s net worth? Leave a comment below.