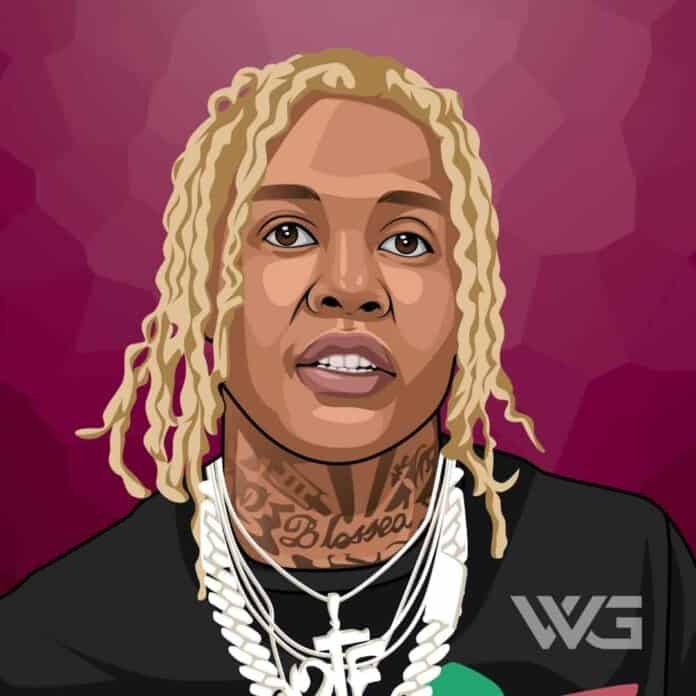 What is Lil Durk’s net worth?

Lil Durk is an American rapper, singer, and songwriter from Chicago. He is the lead member and founder of his own collective and record label, Only the Family.

Durk Derrick Banks was born on the 19th of October 19, 1992, in Chicago. Banks is the son of Dontay Banks and a nurse in Chicago. The name of his mother is not known. He had to shoulder responsibility at a very young age as his father was jailed when he was just 7 years old.

In an interview with a magazine, Lil Durk recalled that there was not even enough food in their home when he was young. The violent neighborhood in which he was brought up had a deep impact on Lil Durk.

In the early years of his career, Lil Durk was associated with the Glo Gang label promoted by Chief Keef. But he was never signed into the label. Due to this reason, Lil Durk started to create his own image in the music world.

After the success of his first two singles, Lil Durk released a mixtape called ‘Life Ain’t No Joke’. This mixtape was downloaded 216,000 times on the online mixtape distribution platform DatPiff. Social media platforms played a big role in popularizing ‘Life Ain’t No Joke’.

The year 2015 marked a giant leap in his career with the release of his first album, ‘Remember My Name’. The album is full of songs based on the street violence of Chicago that he experienced in his childhood. The album was a big hit and ranked fourteen on the Billboard 200 list.

The same year, Lil Durk released his sixth mixtape called ‘300 Days, 300 Nights’. A single, ‘My Beyonce’ was released to promote this mixtape.

The single featured his love interest Dej Loaf. Critics called this mixtape as a refreshing change from his earlier releases which mostly chronicled drug violence in the neighborhood where he was born.

His second album, ‘Lil Durk 2X’ was released on July 22, 2016. A single called ‘She Just Wanna’ featuring another rapper ‘Ty Dolla Sign’ was released two months before the release of the album with the objective of creating buzz around his second album. Durk’s second label got a better response than the first one.

Here are some of the best highlights of Lil Durk’s career:

“Stay working. Stay busy. It should be motivation instead of downtime because downtime is like being depressed. It shouldn’t be like that.” – Lil Durk

“I’m a good guy at the end of the day, you know what I’m saying? A lot of people will believe what they see in the media for a long time ago. I’m just growing as an artist and as a person.” – Lil Durk

“It’s important to always put your city on your back no matter who comes from there,” Durk tells me over the phone. “On your end, you just make sure you support your home. Who really supports you and loves you? That’s your hometown.” – Lil Durk

“To better myself, in the moving situation from Chicago to Atlanta. It’s a better scene, a better vibe. I could focus. And Def Jam, it just wasn’t fitting for me. It wasn’t working for me. No big story behind it; they just didn’t fit me.” – Lil Durk

“Yeah, it’s where I’m from. It’s important to always put your city on your back no matter who comes from there. On your end, you just make sure you support your home. Who really supports you and loves you? That’s your hometown.” – Lil Durk

Now that you know all about Lil Durk’s net worth, and how he achieved success; let’s take a look at some of the lessons we can learn from him:

Don’t waste time on revenge. The people who hurt you will eventually face their own karma.

There’s a natural law of karma that vindictive people, who go out of their way to hurt others, will end up broke and alone.

How much is Lil Durk worth?

Lil Durk’s net worth is estimated to be $8 Million.

How old is Lil Durk?

How tall is Lil Durk?

Lil Durk is one of the upcoming American rappers from Chicago. He started showing interest in music from a young age and self-released his early mixtapes through his own OTF label.

What do you think about Lil Durk’s net worth? Leave a comment below.