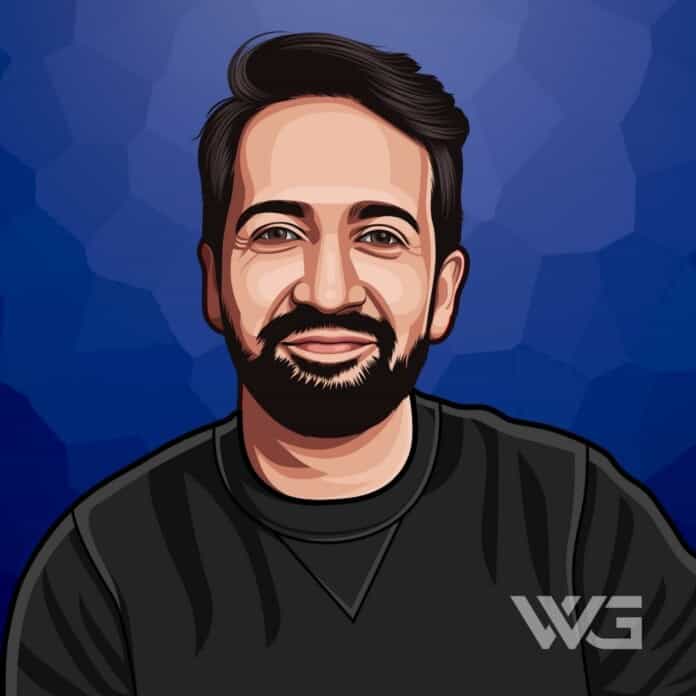 What is Lin-Manuel Miranda’s net worth?

Lin-Manuel Miranda is an American actor, singer, and composer.

Miranda is best known for being the Broadway musical creator ‘In the Heights and Hamilton’. He has won awards that include three Tony Awards, three Grammy Awards, an Emmy Award, and a Pulitzer Prize.

He wrote the music and lyrics for the musical, and the musical is scheduled to be released as a film in June 2021.

As of January 2023, Lin-Manuel Miranda’s net worth is estimated to be roughly $80 Million.

Miranda is the son of Luz Towns and Luis. A Miranda Jr. His mother was a psychologist, and his father worked as a consultant to New York City Mayor Ed Koch.

Miranda’s childhood was mostly spent in Manhattan, and during his younger years, he never failed to spend a month every year at his grandparents’ home in Puerto Rico.

In 2002, Miranda started his career, and along with John Buffalo Mailer, he worked with director Thomas Kail for the musical ‘In the Heights’. The musical had its Broadway premiere in 2008 and became very popular.

His debut work was a huge success, and it brought him four ‘Tony Awards’ and an award for the ‘Best Musical and Best Original Score’.

He worked with Stephen Sondheim while translating ‘West Side Story’ to Spanish. Miranda was seen making a guest appearance on the series ‘The Sopranos’. In 2010, he portrayed Gregory House’s hospital roommate ‘Alvie’ in one episode of ‘House’.

He was seen as an intern and rapper in the sketch ‘Hardly Working: Rap Battle’. Throughout his career, he also played roles in the children’s TV series ‘Sesame Street’.

Miranda has composed music for many different commercials. Alongside Tom Kitt and Amanda Green, he wrote the lyrics of ‘Bring It On,’ which had its premiere at Alliance Theatre in 2011.

In 2015, Miranda took his career to a different level with the premiere of his most successful musical, ‘Hamilton: An American Musical’. It won a ‘Tony Award for Best Musical’ among many other awards. He has also contributed the music and lyrics to the Disney movie ‘Moana.’

How Does Lin-Manuel Miranda Spend His Money?

Lin-Manuel is a wealthy man who is a father of two children and a husband as well. This is why he decided that it was time to spend money on the kind of home that suits his role as a family man and an entertainment industry celebrity.

In 2017, Lin-Manuel Miranda and his wife bought two units at 141 Cabrini Boulevard in a complex called Castle Village. The building is just a few minutes from the George Washington Bridge.

Miranda is also a proud owner of a Drama Book Shop in New York City that he purchased in 2019. He bought the store to save it from going out of business.

Here are some of the best highlights of Lin-Manuel Miranda’s career:

“Making words rhyme for a living is one of the great joys of my life… That’s a superpower I’ve been very conscious of developing. I started at the same level as everybody else, and then I just listened to more music and talked to myself until it was an actual superpower I could pull out on special occasions.” – Lin-Manuel Miranda

“I can’t say I have enough experience with Hollywood to feel that I’ve encountered racism there. I can tell you that I did about five fruitless years of auditioning for voiceovers where I did variations on tacos and Latin accents, and my first screen role was as a bellhop on ‘The Sopranos.” – Lin-Manuel Miranda

“The reason ‘Hamilton’ works is because there is no distance between that story that happened 200-some-odd years ago and now because it looks like America now. It helps create a connection that wouldn’t have been there if it was 20 white guys on stage.” – Lin-Manuel Miranda

Now that you know all about Lin-Manuel Miranda’s net worth, and how he achieved success; let’s take a look at some of the lessons we can learn from him:

You cannot let all the world’s tragedies into your heart. You’ll drown. But the ones you do let in should count. Let them manifest action.

You are perfectly cast in your life. Miranda means that we shouldn’t imagine anyone but you in the role. Go play.

History is so subjective. The teller of it determines it.

How much is Lin-Manuel Miranda worth?

Lin-Manuel Miranda’s net worth is estimated to be $80 Million.

How old is Lin-Manuel Miranda?

How tall is Lin-Manuel Miranda?

Lin-Manuel Miranda is a well-established composer, singer, and actor known for creating and featuring in many Broadway musicals.

Miranda has won the hearts of millions of fans with its incredible composition and lyrics. His playwriting skills have always kept his audience engaged, and his musical ‘Hamilton’ has been honored with several awards.

Miranda is also known for his work in films and series such as ‘Moana,’ ‘Mary Poppins Returns,’ ‘Star Wars: The Rise of Skywalker,’ ‘Do No Harm’, and ‘DuckTales’.

As of January 2023, Lin-Manuel Miranda’s net worth is approximately $80 Million.

What do you think about Lin-Manuel Miranda’s net worth? Leave a comment below.