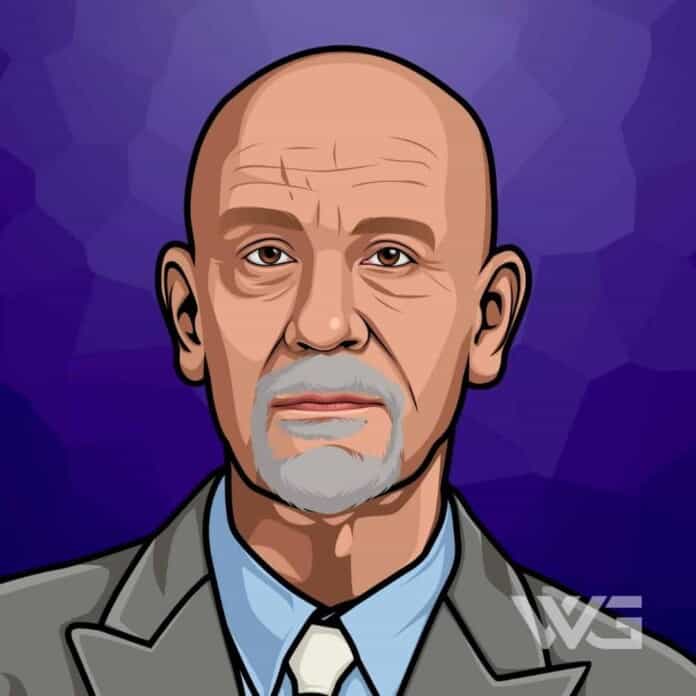 What is John Malkovich’s net worth?

John Malkovich is an American actor and director. Malkovich received Academy Award nominations for his outstanding performances in ‘Places in the Heart’ and ‘In the Line of Fire.’

Throughout his career, he has appeared in more than 70 films, including ‘The Killing Fields,’ ‘Empire of the Sun,’ ‘Dangerous Liaisons’ Of Mice and Men, and ‘The Perks of Being a Wallflower.’

John Gavin Malkovich was born on the 9th of December, 1953, in Illinois.

His father was a state conservation director, and his mother owned the Benton Evening News weekly newspaper and Outdoor Illinois.

Malkovich grew up with his older brother and three younger sisters. His paternal grandparents were Croatian immigrants from Ozalj. His other ancestry includes Scottish, English, French, German, Serbian, and Montenegrin.

Malkovich got noticed for his amazing performance in Sam Shepard’s family tragedy ‘Curse of the Starving Class’ at ‘Goodman Theatre’ in 1978. He appeared in the play ‘True West,’ for which he won an Obie Award in 1980.

He started playing film roles, and during the 1980s, he played a blind border in the movie ‘Places in the Heart.’ Malkovich was much appreciated for his performance of Mr. Will. He was nominated for an Academy Award for this role.

In 1999, Malkovich played a fictionalized version of himself in the comedy film ‘Being John Malkovich.’ He won several awards and accolades for his role.

He starred alongside Sandra Bullock in the thriller ‘Bird Box’ in 2018. The following year, he was seen in the controversial biographical movie ‘Extremely Wicked, Shockingly Evil and Vile’ based on Ted Bundy’s life.

He has starred in TV series such as ‘Crossbones,’ ‘Billions,’ ‘The ABC Murders,’ and ‘The New Pope.’ Malkovich played Dr. Adrian Mallory in the Netflix series ‘Space Force’ in 2020.

How Does John Malkovich Spend His Money?

As much as celebrities are paid, you think they would be more careful with their money. Malkovich knows what it feels like to lose it all quite fast. He lost some of his fortunes because he trusted the wrong people.

However, he owns a beautiful house in Massachusetts and co-owns a restaurant in Portugal.

Malkovich is a proud owner of a home in Massachusetts. The house comes with 6 bedrooms and 4,5 bathrooms.

Malkovich lived in France for nearly a decade, and he is fluent in French. He loves to travel, and he co-owns the restaurant Bica do Sapato and nightclub Lux in Lisbon, Portugal.

Here are some of the best highlights of John Malkovich’s career:

“I probably have more female friends than any man I’ve ever met. What I like about them is that almost always, they’re generally mentally tougher, and they’re better listeners, and they’re more capable of surviving things. And most of the women that I like have a haunted quality – they’re sort of like women who live in a haunted house all by themselves.” – John Malkovich

“And may the best of you – for it will only be the best of you, and even then only in the rarest and briefest moments – succeed in framing that most basic of questions, ‘how do we live?’” – John Malkovich

“Some directors expect you to do everything; write, be producer, a psychiatrist. Some want you to die in a tragic accident during the shooting so they can get the insurance.” – John Malkovich

“You can’t work in the movies. Movies are all about lighting. Very few filmmakers will concentrate on the story. You get very little rehearsal time, so anything you do onscreen is a kind of speed painting.” – John Malkovich

“Actors generally get to do things you probably shouldn’t do in real life – well, at least as much as one might like to or be tempted to. Though I suppose a lot of actors go ahead and do it, don’t they?” – John Malkovich

“I know for a fact that a lot of actors are desperate and unhappy if their careers are not progressing at what they think is the correct rate. They go crazy if they’re not working. I don’t feel I’d be that way. You can always get a few people together and put on a play. Maybe not in New York or L.A., but in a lot of other towns, you can.” – John Malkovich

Now that you know all about John Malkovich’s net worth and how he achieved success; let’s take a look at some of the lessons we can learn from him:

Even if you do succeed, most people won’t notice anyway. Failure’s a natural part of life.

If you’re too bright, it can limit you because you spend so much time thinking that you don’t do anything.

You have to do things people see, or you don’t get to do anything.

How much is John Malkovich worth?

John Malkovich’s net worth is estimated to be $25 Million.

How old is John Malkovich?

How tall is John Malkovich?

John Malkovich is an American actor best known for his performance in movies ‘Places in the Heart’ and ‘In the Line of Fire.’ He has made it big as a producer too.

He made his Broadway debut as ‘Biff’ in ‘Death of a Salesman.’ Following his successful career, he has managed to land many major roles. Malkovich was nominated for the Academy Award for Best Supporting Actor for his ‘Places in the Heart.’

What do you think about John Malkovich’s net worth? Leave a comment below.