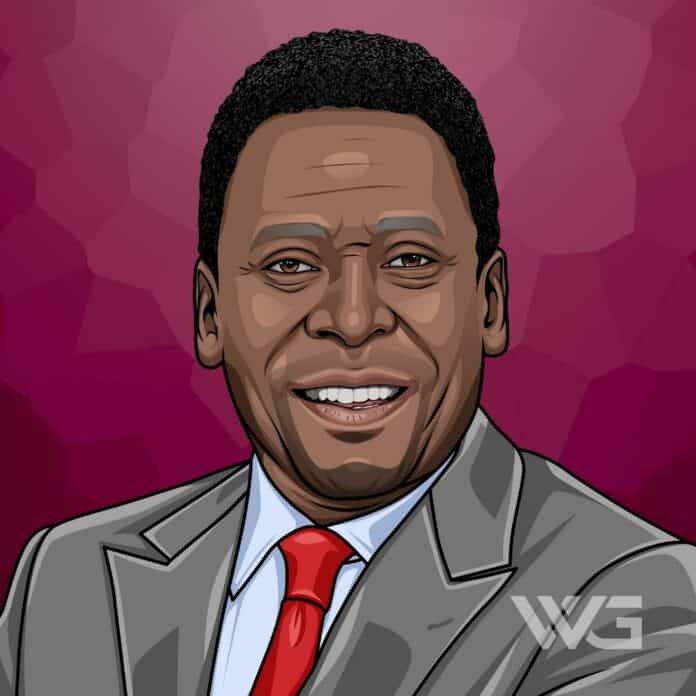 What is Pele’s net worth?

Pelé is a retired football player from Brazil who is regarded as the best soccer player of all time and was the highest-paid athlete at the peak of his career.

Pelé, whose real name is Edson Arantes do Nascimento, was born 23 October 1940, in Três Corações, Minas Gerais, Brazil, in a family of soccer players.

After he mispronounced the name of goalkeeper Bilé as Pelé, it was used as a nickname for the young soccer player, sticking throughout his career.

Growing up in poverty in Bauru, São Paulo, Pelé learned football from his father and began playing for several Brazilian youth teams.

In 1956, Pelé signed his first professional contract with Santos FC, becoming the top scorer in the Brazilian league when he was just 16 years old.

Despite offers from some of the richest soccer teams in the world, Pelé stuck with Santos for much of his career, helping the team win the 1962 Intercontinental Cup.

During his time at Santos, he scored the most goals by any player at the time, and a feat only surpassed by Lionel Messi in 2020.

His run of victories extended to his international career, with three World Cup trophies with the Brazilian national team between 1958 and 1970.

Renowned for his versatile playing style associated with the expression “The Beautiful Game”, Pelé has often been compared to the likes of Cristiano Ronaldo and other soccer icons.

Since his retirement, Pelé has appeared in the movie Escape to Victory, starring Michael Caine and Sylvester Stallone, and a cameo in Mike Bassett: England Manager.

In 2006, he helped inaugurate the FIFA World Cup final with one of the richest models in the world, Claudia Schiffer.

As one of the richest athletes in the world, Pelé has taken in considerable annual salaries through his national and international contracts.

During the peak of his career, he was the highest-paid athlete of all time and an icon to his fellow Brazilians.

Pelé’s net worth has continued to grow over time, from his peak earnings as the world’s leading soccer player to his ongoing royalties and brand endorsement deals.

These revenue streams have helped him become one of the richest soccer players in the world, with a level of wealth that continues to grow.

Here’s a breakdown of Pelé’s annual net worth:

Throughout his life, Pelé has been married on three occasions, marrying Rosemeri dos Reis Cholbi, with whom he has three children.

He was romantically tied to Brazilian television presenter Xuxa during the 1980s, and in 2010 he began dating Marcia Aoki, whom he married in 2016.

Active on social media, he uses his official Instagram account to update his fans on new media appearances and other activities.

As the most successful soccer player of all time, it’s not surprising that Pelé has picked up many awards and accolades over the years.

These awards have been granted both as an individual and as part of the championship-winning teams with which he played.

Here are some examples of the high profile awards and honors from Pelé’s career:

Pelé has won many more awards over the years, making him one of the most celebrated soccer players ever known.

How Does Pelé Spend His Money?

Pelé’s ongoing income and established net worth allow him to invest money in plenty of luxury goods and real estate.

In 2018, he reportedly sold a home in the Hamptons for nearly $3 million, which he had expanded over the years to significantly increase its value from its 1979 price of $156,000.

He is also a collector of some of the most expensive watches in the world and sold a classic Hublot at auction in 2015.

Beginning with his promising amateur career and processing through his many cup victories, Pelé’s career is studded with successful moments,

A world record-breaking player who has inspired countless soccer fans, he has helped redefine the sport forever.

Here are some of the best highlights of Pelé’s career:

Even though his football career is behind him, Pelé remains active as an ambassador and public figure and continues to work with various charities around the world.

As one of soccer’s most legendary figures, Pelé has shared many insights into his training regime and success with the Brazilian national team.

His playing style and personality off the pitch inspired some of today’s best soccer players to take up the sport and compete professionally.

Here are our favorite quotes from Pelé:

Now that you know all about Pelé’s net worth let’s look at how his life and professional soccer experiences can help us lead more successful lives.

Here are some of the best success lessons to learn from Pelé:

1. Transform Anger Into A Positive Emotion

Great athletes understand the importance of channeling anger and aggression in a positive direction, helping to improve performance.

Pele was a master of transforming negative energy into top-tier performance on the pitch and winning the game.

While it’s always good to understand the rules of the game, sometimes it’s better to throw aside the foundations and act on instinct.

Pele understood how the rules can sometimes be broken, delivering an unorthodox soccer playing style that delivered outstanding results.

Pele might have broken records with his goalscoring record, but he didn’t score these goals in isolation.

Remember to thank your teammates for the role they played in your accomplishments.

That concludes our article exploring the net worth of Brazilian football player Pelé, from his legendary World Cup wins to his post-retirement business endeavors.

Pelé has remained active as a public figure and entrepreneur since retiring from soccer, and his net worth has continued to increase in recent years.

We’ll ensure this article covers any future changes to his financial status, so be sure to revisit again for the latest details.

What do you think about Pele’s net worth? Leave a comment below.