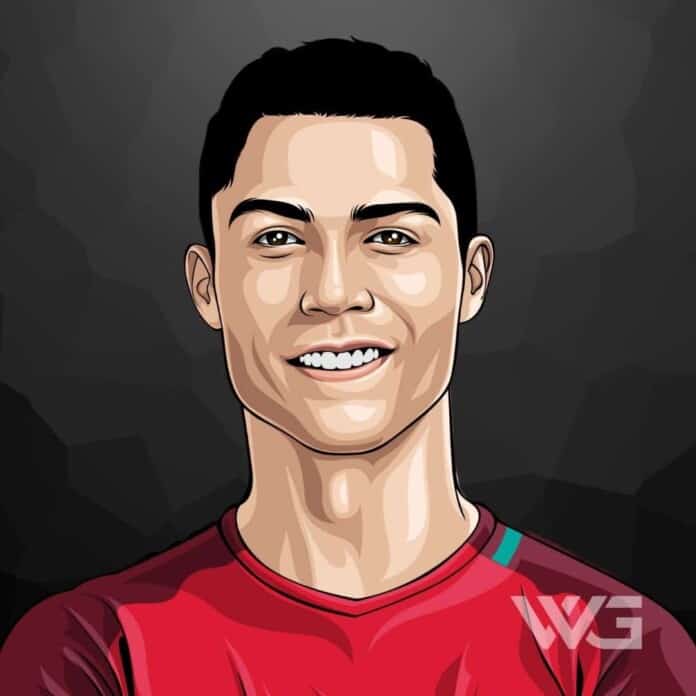 What is Cristiano Ronaldo’s net worth?

As of December 2022, Cristiano Ronaldo’s net worth is roughly $500 Million, making him one of the richest athletes in the world.

Widely regarded as one of the greatest footballers of all time, Cristiano Ronaldo’s career has set him on track to break records and earn more than $1 billion from salaries and endorsements.

In addition to playing with Manchester United and the Portugal national team, he’s an entrepreneur with a fashion boutique under his alias, CR7.

Born Cristiano Ronaldo dos Santos Aveiro on February 5th, 1985 in the São Pedro parish of Funchal in Portugal, he was the fourth and youngest son of a cook and municipal gardener.

Ronaldo’s sporting activities began at a young age, playing football for Andorinha in the early 1990s, before taking a three-day trial with Sporting CP at the age of 12.

As his gift for football became apparent, his mother allowed him to drop out of school to focus on his training.

After a health scare in which Ronaldo underwent heart surgery for tachycardia, he resumed training, and soon after his career began.

Following on from a stint at Sporting CP, Ronaldo was picked up by Manchester United in 2003, moving to the United Kingdom to play for the team and start his professional career.

By 2007, he had won his first of several Premier League titles, with solid performances at both the UEFA Champions League and the FA Cup Final of the same year.

After winning both the Ballon D’or and the FIFA World Player of the Year in 2008, Ronaldo signed to Real Madrid for a record-breaking $80 million.

A series of cup wins, numerous awards and other accolades followed, and in 2016 Ronaldo became the all-time top scorer for Real Madrid.

In 2018, Ronaldo signed a contract with Juventus, leaving Real Madrid after an exceptional run of goals, and once again setting a new record for the highest-paid player transfer.

The transfer cost Uventus well over $100 million and set Ronaldo on the path to becoming one of the richest athletes in the world at the time.

In 2022, Cristiano Ronaldo returned to the team where he found his fame, playing for Manchester United and scoring the second hat trick of his career against Tottenham.

In addition to playing professional football, Ronaldo’s net worth has been significantly boosted throughout his career due to a string of endorsement deals and other sponsorships with clothing brands.

He’s put his name to everything from sports clothing and soft drinks, to financial services and video games.

These endorsements have earned Ronaldo large sums of money on an annual basis, earning $110 million in a one-year period from June 2018 to June 2019 alone.

In addition, Ronaldo has put his name to a variety of self-branded products that include clothing and perfumes, the sales of which have added considerable value to his overall net worth.

A strong online presence has helped to keep his name in the public eye, and he is well known for his philanthropic endeavors.

Ronaldo has helped to raise considerable sums of money for the 2004 Indian Ocean earthquake and tsunami, as well as the 2015 earthquake in Nepal.

As one of the richest soccer players in the world, Cristiano Ronaldo has frequently broken sporting records for his exceptionally high earnings.

Here’s a breakdown of these earnings over the last few years:

While information about Cristiano Ronaldo’s net worth over time is sometimes contradictory, we’ve analyzed the data to bring you these estimates of his wealth.

Ronaldo is known to keep his private life out of the media spotlight and avoids drinking alcohol and other sugary drinks or fast food.

He has six children in total, with his first son Cristiano Jr. born in 2010, born to his partner at the time, Russian model Irina Shayk.

In 20127, Ronaldo became the father of twins, daughter Eva and son Mateo, who were both via surrogacy.

Shortly after, his daughter Alana Martina was born, from his relationship with Argentine-Spanish model Georgina Rodríguez.

Cristiano Ronaldo is one of the most celebrated footballers of modern times, with a long list of awards and achievements to his name.

Here are some of the notable awards Ronaldo has received over his career:

How Does Cristiano Ronaldo Spend His Money?

As with many of the world’s super-rich, Ronaldo is a keen collector of some of the most expensive cars in the world, with a Lamborghini Aventador and Rolls-Royce in his collection.

He owns a variety of real estate, from an apartment in Trump Tower in Manhattan to a luxury villa in La Finca worth $6.2 million.

Also the proud owner of a collection of the most expensive watches you can buy, he’s been spotted wearing a Hublot Masterpiece MP-09 Tourbillon Bi-Axis worth $1.2 million.

Here are some of the best highlights of Cristiano Ronaldo’s career:

“Your love makes me strong. Your hate makes me unstoppable.” – Cristiano Ronaldo

“We should make the most of life, enjoy it because that’s the way it is.” – Cristiano Ronaldo

“But I don’t want to be compared to anyone – I’d like to impose my own style of play and do the best for myself and for the club here.” – Cristiano Ronaldo

“I am not a perfectionist, but I like to feel that things are done well. More important than that, I feel an endless need to learn, to improve, to evolve.” – Cristiano Ronaldo

“Never listen to the haters around you. Instead, take their hate as motivation and prove them wrong. The same fire which burns one can become the fuel for another.” – Cristiano Ronaldo

“Don’t just talk about what you want to do. Go out and do it. People love the sound of their dreams and keep talking about them. But only those who work hard ever taste greatness.” – Cristiano Ronaldo

“You don’t become the best overnight. You need to set powerful intentions every day, every month, every year, to go beyond your own reach and to grow to the next level.” – Cristiano Ronaldo

“There must be a greater purpose to what you’re chasing. Don’t just chase money or fame. When your goals arouse terrifying longing, you’ll conquer all obstacles that come your way.” – Cristiano Ronaldo

View our larger collection of the best Cristiano Ronaldo quotes!

1. Build confidence and believe in yourself

As Ronaldo knows, scoring goals means focusing on them with the knowledge you’ll hit them.

Learn to have faith in yourself and your confidence levels will hit the roof.

2. Learn to adapt to changes on a continual basis

Throughout his career, Ronaldo has adapted his playing style to become a master of his sport, so take this on board and always strive to develop new skills.

3. Be fit and take care of your health at all times

It goes without saying Ronaldo knows a thing or two about staying fit, so take this as inspiration to exercise regularly and avoid junk food as much as possible.

Here are some of the most frequently asked questions about Cristiano Ronaldo:

How much is Cristiano Ronaldo worth?

Cristiano Ronaldo’s net worth is estimated to be $500 Million.

How old is Cristiano Ronaldo?

Cristiano Ronaldo was born on February 5, 1985, and is currently 37 years old.

How tall is Cristiano Ronaldo?

A world-class footballer with a reputation on par with legends including Lionel Messi, Michael Jordan, and Floyd Mayweather, Cristiano Ronaldo has secured his place in the Hall of Fame.

As Ronaldo’s net worth changes due to new endorsements and entrepreneurial activities, we’ll be sure to update this article to bring you the most accurate information.

As of December 2022, Cristiano Ronaldo’s net worth is estimated at $500 Million.

What do you think about Cristiano Ronaldo’s net worth? Leave a comment below.