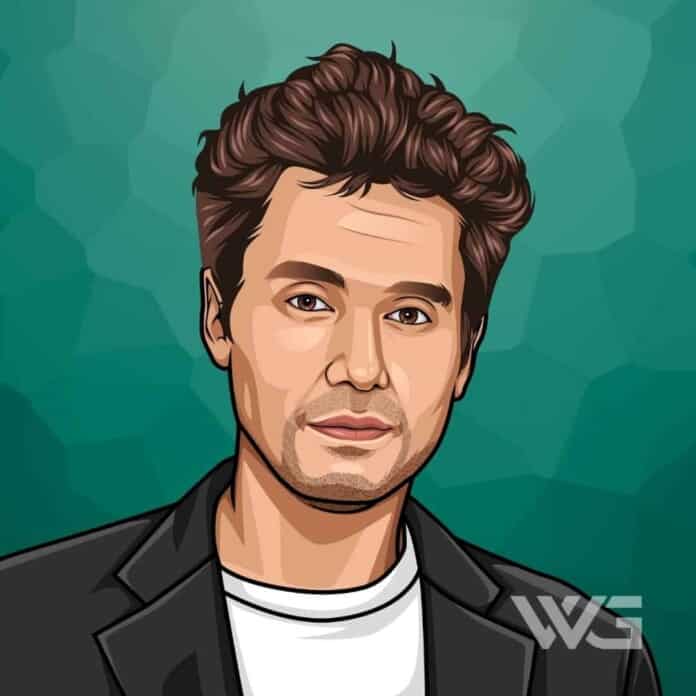 What is John Mayer’s net worth?

John Mayer is an American singer, songwriter, and record producer from Connecticut.

Mayer started his music career in 1997 when he and Clay Cook formed a band called Lo-Fi Masters. After the band’s split, he continued to play at local clubs and pubs.

After Mayer’s appearance at a 2001 South by Southwest Festival, he signed to Aware Records. He won the Grammy Award in 2003.

As of February 2023, John Mayer’s net worth is estimated to be roughly $70 Million.

John Clayton Mayer was born on the 16th of October, 1977, in Connecticut. Mayer grew up in Fairfield, and he has two brothers. He attended the Center for Global Studies in Norwalk.

Mayer became interested in the guitar after he watched Michael J. Fox’s performance in a movie. He then went on to learn blues music after hearing Stevie Ray Vaughan’s music.

Mayer released his debut EP ‘Inside Wants Out’ in 1999. Some of the songs included ‘Back to You,’ ‘My Stupid Mouth,’ and ‘No Such Thing’. His debut studio album ‘Room for Squares’ was dropped in 2001. The album peaked at number 8 on ‘US Billboard 200’ chart.

His second album ‘Heavier Things’ was released in 2003, and the album had positive reviews. In 2005, he formed a rock band called ‘The John Mayer Trio’.

His sixth album ‘Paradise Valley’ was released in 2013, and the album featured break and instrumentals. The album consists of electric guitars instead of harmonica.

How Does John Mayer Spend His Money?

John Mayer has a big passion for collecting watches. In 2017, MSNBC reported that he had spent 25% of his entire net worth on watches.

As mentioned above, Mayer loves lavish watches. In his impressive collection, he owns a Patek Phillippe watch with an estimated cost of $300,000.

Mayer is a proud owner of a home in Beverly Hills. It features five bedrooms, seven bathrooms, and outdoor amenities. He purchased the amazing home for $13.4 million.

Here are some of the best highlights of John Mayer’s career:

“The night I was recognized for ‘Daughters’ at the Grammys was the night this record started. ‘Continuum’ is not a shot in the dark, it’s not a guesstimation.” – John Mayer

“If you get half a million, at a certain stage, you probably will get 4 million people, if they can hear it. The touring thing is unbelievable. It really is amazing from what we did the last tour even to what we are doing now.” – John Mayer

“I hope that what it comes down to at the end of the day is that people believe that I believe what I’m singing. It comes down to being believable. You don’t have to be likable.” – John Mayer

“Someone asked me the other day, ‘What does it feel like now to have a hood pass?” Why are you pulling a punch and calling it a hood pass if you really have a hood pass? I’ve never walked into a restaurant, asked for a table and been told, ‘We’re full.'” – John Mayer

Now that you know all about John Mayer’s net worth, and how he achieved success; let’s take a look at some of the lessons we can learn from him:

1. Everything Happens For A Reason

Someday, everything will make perfect sense. So, for now, laugh at the confusion, smile through the tears, be strong, and keep reminding yourself that everything happens for a reason.

Very few things in life are worthy of the kind of emotional distress we put ourselves through.

If you had started doing anything two weeks ago, by today, you would have been two weeks better at it.

How much is John Mayer worth?

John Mayer’s net worth is estimated to be $70 Million.

How old is John Mayer?

How tall is John Mayer?

John Mayer is an American singer and songwriter who is best known for his amazing guitar skills.

He has earned major chart success in the US and many other countries. Thanks to his hard work and determination, he is today one of the world’s best musicians.

He has won seven Grammy Awards, and he became successful across genres. Most of his albums are very successful and have been accredited multi-platinum.

As of February 2023, John Mayer’s net worth is estimated to be roughly $70 Million.

What do you think about John Mayer’s net worth? Leave a comment below.