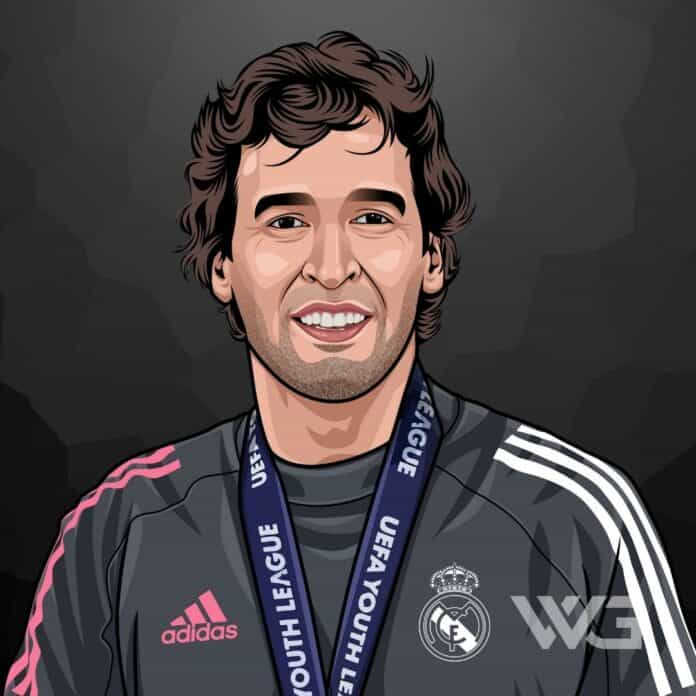 What is Raúl González Blanco’s net worth?

Raúl González Blanco is a Spanish football club manager and former professional soccer player widely considered to be among the greatest soccer players of all time.

He has played for Real Madrid in addition to two German teams and the Spanish national team at several FIFA World Cup and UEFA Euro championships.

As of November 2022, Raúl González Blanco’s net worth is estimated to be $100 Million.

Raúl González Blanco was born 27 June, 1977, in Madrid, Spain, and was raised by his parents in the San Cristobal de Los Angeles area of the city.

He began playing football at the age of 10 and playing in local youth teams in and around Madrid.

After playing for his local club, San Cristobal, for three years, Raúl González Blanco moved to the youth setup for Atletico Madrid.

In 1992, Raúl González Blanco moved again, playing for the youth academy of Real Madrid and leading to his first contract as a professional soccer player.

Raúl González Blanco’s professional career with Real Madrid began in 1994, with the upcoming star scoring sixteen goals in his first nine games, leading to his promotion to the first team.

He remained with the team for many years, becoming ranked on the all-time list of La Liga goalscorers, behind Cristiano Ronaldo, Lionel Messi, and Hugo Sanchez.

In 2010, he was transferred to the German club Schalke 04, scoring many goals both in the regular German league and the UEFA Europa League.

He then moved to Al Sadd, the Qatari team, playing in the Qatar Stars League beginning in 2012 before moving again to the New York Cosmos club in 2014.

On the international stage, he has represented Spain several times, beginning with the 1995 FIFA under-20s World Cup and two UEFA Euro championships.

His style of play has earned Blanco praise from many successful soccer players, with Rio Ferdinand praising his clever movement and ability to exploit gaps.

His brand sponsorships include working with the makers of the most expensive sneakers in the world, with his Adidas endorsement earning him a large paycheck.

He has also appeared in commercials for other major brands, including alongside David Beckham, to promote the soft drink manufacturer Pepsi.

As one of the highest-ranked soccer players of his generation, Raúl González Blanco has received large transfer fees and salaries over the course of his career.

At the peak of his career, he could command salaries running into several million dollars each year, with enormous fees for his club transfers.

These earnings have been significantly supplemented through his many brand endorsement deals, each of which is worth millions of dollars each year.

Raúl González Blanco’s high salary and revenue through brand sponsorships have meant his net worth has continued to climb throughout his career.

This income and other assets have made him one of the richest soccer players in the world, reflecting the value he has brought to his teams.

He continues to manage football teams and invest in business ventures, so we can expect his net worth to increase in the future.

In 1999, Raúl González Blanco married Mamen Sanz, with whom he has four sons and a daughter, with two sons also working as professional footballers.

His daughter Maria joined the profession in 2022 after being signed by Real Madrid’s under-15 football team.

Raúl González Blanco has a solid presence on social media, notably through his official Instagram account, where he posts a broad selection of photographs for his fans.

Raúl González Blanco has experienced a hugely successful career as a professional football player on the national and international stages.

This includes many awards and trophies for his team wins and celebrating his contributions to the sport.

Here are some highlights from Raúl González Blanco’s career:

As he continues his soccer career as a club manager, we can expect him to lead more teams to victories in major championships and tournaments.

How Does Raúl González Blanco Spend His Money?

While many of the richest soccer players are keen to show off their wealth and expensive cars, Raúl González Blanco is known for downplaying his wealth.

With that said, as one of the richest athletes in the world, he is able to afford a life of luxury and invest in expensive real estate.

He continues to live in his hometown of Madrid, working as manager of Real Madrid Castilla and aiming to take over the Real Madrid first team.

Raúl González Blanco’s soccer player and manager career has led to many career successes and highlights worth noting.

This includes breaking records while playing for the Spain national team and being ranked in the FIFA 100 list of the greatest living players.

Here are some of the best highlights of Raúl González Blanco’s career:

As his managerial career develops, we can expect him to enjoy many more highlights in future years.

Over the course of his professional career, Raúl González Blanco has conducted many interviews and shared his thoughts on the sport and his personal values.

He has also discussed his life growing up in a working-class family and his desire to help children explore their talent on the pitch.

Here are our favorite quotes from Raúl González Blanco:

Now that you know all about Raúl González Blanco’s net worth, we’ll dive into some of the incredible life lessons his experiences as a professional soccer player has shown us.

Here are some of the best success lessons to learn from Raúl González Blanco:

1. To Be The Best Possible Player Combine Technique With Speed

If you want to be the best you can be, practice your pursuits in all aspects.

2. Never Forget Your Loved Ones

One of Raúl González Blanco’s trademark behaviors on the pitch included kissing his wedding ring every time he scored a goal.

This simple but meaningful gesture demonstrates his recognition of the importance of respecting your loved ones.

Raúl González Blanco’s involvement with the Real Madrid youth team as a coach reminds us that we should strive to share our expertise with the next generation.

There you have it, our complete guide to Raúl González Blanco’s net worth, covering his early life and career as a professional soccer player and team manager.

His work with Real Madrid’s youth team and ongoing brand endorsements mean his net worth will continue to change during this new phase of his professional life.

We’ll update this article as and when his wealth and career change, so make sure you bookmark this page for future reference.

As of November 2022, Raúl González Blanco’s net worth is estimated to be $100 Million.

What do you think about Raúl González Blanco’s net worth? Leave a comment below.