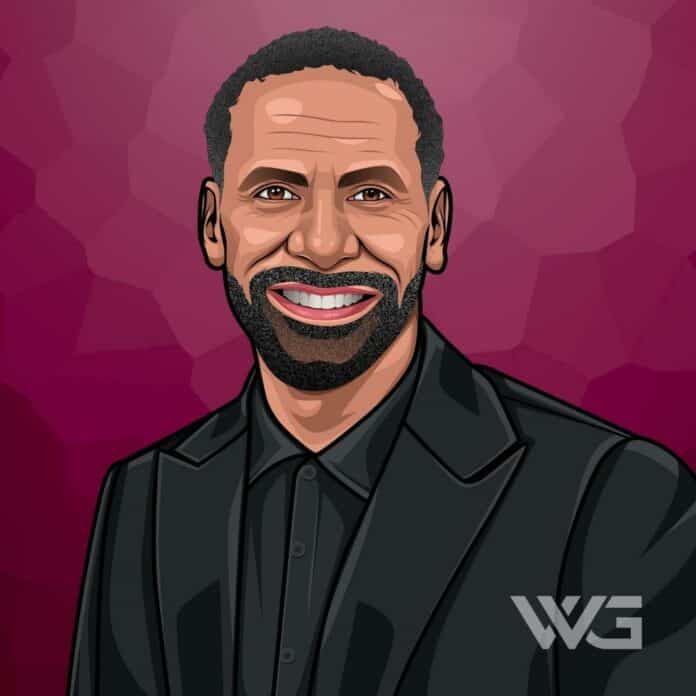 What is Rio Ferdinand’s net worth?

Rio Ferdinand is an English footballer and television pundit for BT Sport who played for the England national team as well as Manchester United in the Premier League.

One of the greatest center-back players of his generation, his significant net worth has been enhanced through business ventures and endorsement deals.

As of December 2022, Rio Ferdinand’s net worth is estimated to be $75 Million.

Growing up in a large family in Peckham, London, Rio played football in local parKs and attended Blackheath Bluecoat School.

As a teenager, Ferdinand participated in many sports, including gymnastics and football, as well as participating in drama and ballet.

In the late 1980s, he began playing in youth teams and was spotted by Frank Lampard, who noticed his potential to play center back position.

After passing through the youth teams rankings, Rio Ferdinand made his senior debut with West Ham United, marking the beginning of his professional football playing career.

He soon played with some of the richest soccer teams in the world, following a short spell with Leeds United with a record-breaking transfer to Manchester United in 2002.

With Manchester United, Ferdinand would play with some of the icons of soccer, including David De Gea and Bastian Schweinsteiger, leading the team to many victories over the following years.

In 2014, Ferdinand had a brief spell playing for Queens Park Rangers, retiring at the end of the season in 2015.

His international career saw him become the second most capped player for the England team in history, leading them into several FIFA World Cup tournaments.

Off the pitch, Rio Ferdinand has appeared alongside one of the richest rappers in the world, 50 Cent, in the action movie Dead Man Running.

As one of the richest soccer players in the world, Rio Ferdinand has been able to draw a salary of hundreds of thousands per month, in addition to income from his brand endorsements.

As one of the richest athletes in the world, Rio Ferdinand has enjoyed an increasing net worth over the course of his career, commanding exceptionally high transfer fees and salaries.

After his retirement from playing, his move to commentary ensures his net worth will continue to increase.

Endorsements, other media appearances, and his business ventures will also continue to contribute to the growth of his wealth.

Rio Ferdinand married his sweetheart Rebecca Ellison in 2009, having three children with her before her death from breast cancer in 2015.

In 2019, Ferdinand married for the second time to Kate Wright, one of the cast members of the reality television show, The Only Way Is Essex.

He has a strong presence on social media, including his official Instagram account, which has over 5 million followers.

Rio Ferdinand has picked up multiple awards and accolades over the years with his nationally and internationally successful career.

Here are some examples of the high profile awards and accolades from Rio Ferdinand’s career:

Ferdinand’s continued involvement in professional soccer and contributions to the sport will no doubt see his list of awards and achievements expand.

How Does Rio Ferdinand Spend His Money?

With his impressive net worth and income, Rio Ferdinand has the ability to lead the luxurious life typically associated with professional soccer players.

He owns some of the most expensive cars in the world and has been spotted with a high-end Aston Martin in his collection.

Together with his wife and children, Ferdinand resides in a large family home in Kent, which they share with their pet Chihuahuas.

Rio Ferdinand’s career has been notable for his many accomplishments both on and off the football pitch.

Here are some of the best highlights of Rio Ferdinand’s career:

With many more notable highlights and successes to his name, Rio Ferdinand’s career achievements have rarely been surpassed.

One of the most popular players in the Premier League at the peak of his career, Rio Ferdinand has been outspoken about his passion for soccer.

Here are our favorite quotes from Rio Ferdinand:

Now that you know all about Rio Ferdinand’s net worth, we’ll take a look in more detail at some insights into a successful sporting career we can learn from his experiences.

Here are some of the best success lessons to learn from Rio Ferdinand:

1. Become A Master Of Self-Management

If you want to succeed in life, you can’t rely on others to organize your day for you.

Ferdinand understood early in his career the importance of self-management and being your own boss at all times.

The tragic loss of his first wife could have derailed Rio Ferdinand’s soccer career for good, but the star didn’t let his grief prevent him from getting back to training and succeeding in the future.

3. Never Forgot The Importance Of Family

Rio Ferdinand is well known for his love of family, having come from a large family himself as well as having several children of his own.

No amount of money and fame can replace your loved ones, so make sure you place them at the center of your life.

So there you have it, our complete guide to the football career and off-pitch activities that have helped Rio Ferdinand achieve his impressive net worth.

While Ferdinand has retired from playing professionally, his media appearances and work as a commentator ensure his net worth will continue to increase.

Make sure you return to this article in the future, as we’ll update it to bring you the latest facts and figures about Rio Ferdinand’s net worth.

As of December 2022, Rio Ferdinand’s net worth is estimated to be $75 Million.

What do you think about Rio Ferdinand’s net worth? Leave a comment below.