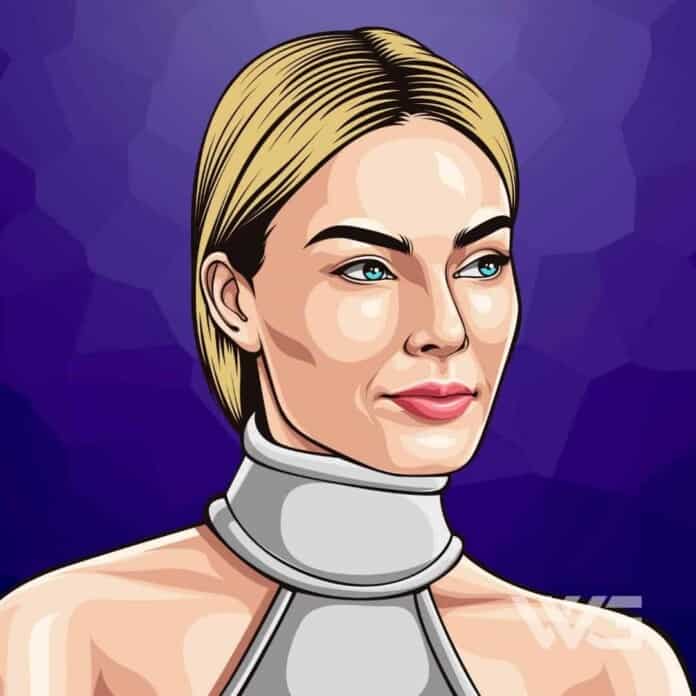 What is Margot Robbie’s net worth?

As of February 2023, Margot Robbie’s net worth is estimated to be $26 Million.

Margot Elise Robbie is an Australian actress and film producer from Queensland. Robbie has received nominations for an Academy Award, a Golden Globe Award, and three BAFTA Awards.

In 2017, Time magazine named her as one of the 100 most influential people in the world.

Margot Elise Robbie was born on the 2nd of July, 1990, in Dalby, Queensland. Robbie grew up in Gold Coast and moved to Melbourne in her teenage years to pursue acting professionally. Her mother, Sarie Kessler is a physiotherapist, and her father Doug Robbie is a sugarcane tycoon.

Robbie was raised by her mother and grandparents on their farm. She has an older brother Lachlan, younger brother Cameron and a sister, Anya.

Robbie began her acting career in 2007 with two Australian films ‘Vigilante’ and ‘I.C.U.’.  In 2008, she appeared as a guest in two episodes of the Australian children’s television series ‘The Elephant Princess’.

Her first big break also came in the form of a guest role initially. In June 2008, she appeared as Donna Freedman on the Australian soap opera ‘Neighbours’.

In 2011, she moved to Los Angeles to pursue a Hollywood career, and auditioned for the new series of ‘Charlie’s Angels’. Instead, she was offered the role of Laura Cameron, a newly trained flight attendant, in the ABC drama series ‘Pan Am’.

It was followed by the action-adventure film ‘The Legend of Tarzan’, which released in July, and co-starred Alexander Skarsgard, Samuel L. Jackson, and Christoph Waltz. She played the female lead, Jane Porter.

In 2016, she played another major role, Harley Quinn, in the blockbuster supervillain movie, ‘Suicide Squad’. The film, which starred actors like Will Smith, Jared Leto, Viola Davis, and Joel Kinnaman, received criticism for its muddled plot, but Robbie’s performance charmed most critics.

Here are some of the best highlights of Margot Robbie’s career:

“When you look at movies, the lead girl is always gorgeous and thin. There is a stereotype that you need to look a certain way and when you get in the business you really feel the pressure.” – Margot Robbie

“Growing up I never had a perfume. I was like oh, one day when I’m grownup and have money I’m going to wear perfume. I had one perfume and I would save it for really, really, really special occasions. Which meant I never actually wore it. So now it’s one of those things like, I can wear perfume every day. I can afford to buy another one, I’m really lucky that I can. Now when I have nice stuff I don’t save it anymore, I try to use it.” – Margot Robbie

“I try to remind myself that all of this could be over tomorrow because I could wake up and magically be 35 feet tall and not be able to act in movies anymore.” – Margot Robbie

“Probably not for about 10 years, because I’ve got so much to do before then, but I really want to have four kids … I’d love them to have adorable little American accents, but I do want to bring my kids up in Australia; it’s such a good lifestyle.” – Margot Robbie

“I feel like I’m pretty good at doing my own makeup. I’ve watched a lot of people do my makeup, so I’ve been able to gauge what looks good and what doesn’t.” – Margot Robbie

Now that you know all about Margot Robbie’s net worth, and how he achieved success; let’s take a look at some of the strongest lessons we can learn from her:

Seek to understand first. How can you make an intelligent remark on something if you haven’t taken the time to observe what’s happening first? You have two ears and only one mouth. There’s a reason for that.

Instead of writing up a huge to-do list every day – focus on completing the 3 more important items every day. This forces you to prioritize your activities to ensure you’re getting the best return on your energy and time. Ask this question: “Do I really need to do this today?”

If you don’t even know where you’re headed, how will you create the plan on how to get there? Set your destination first and then set sail.

How much is Margot Robbie worth?

Margot Robbie’s net worth is estimated to be $26 Million.

How old is Margot Robbie?

How tall is Margot Robbie?

Margot Robbie is an Australian actress who is best known for the films ‘The Wolf of Wall Street’, ‘Focus’, ‘Z for Zachariah’, ‘The Legend of Tarzan’ and ‘Suicide Squad’.

As of February 2023, Margot Robbie’s net worth is estimated to be $26 Million.

What do you think about Margot Robbie’s net worth? Leave a comment below.