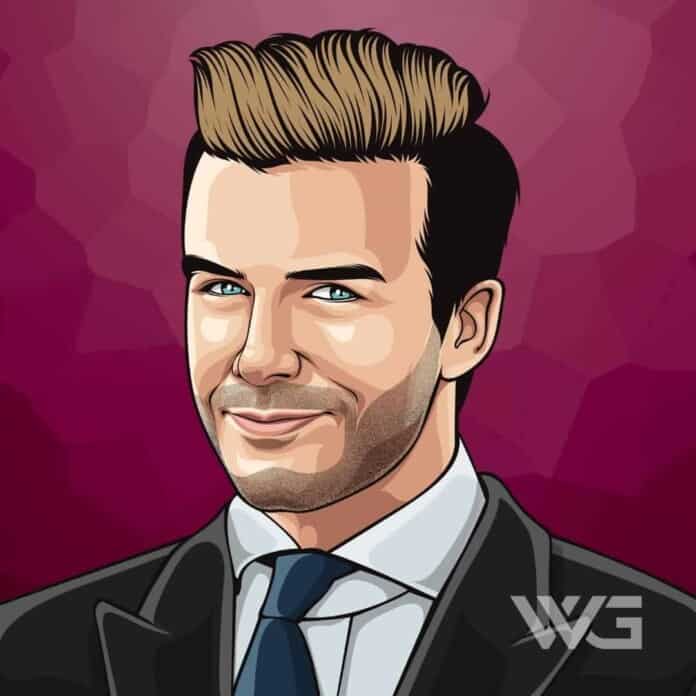 What is David Beckham’s net worth?

He has played for Manchester United, Preston North End, Real Madrid, Milan, LA Galaxy, Paris Saint-Germain, and the England national team, for which he held the appearance record for an outfield player until 2016.

Beckham is considered to be one of the best football players in history.

David Robert Joseph Beckham was born on the 2nd of May 1975, in the Leytonstone area of London. Beckham is the son of Alan Beckham and Sandra Georgina. His father worked as a kitchen fitter while his mother was a hairdresser.

He attended Chase Lane Primary School as a child and then went on to study at the Chingford County High School.

However, throughout his childhood, Beckham was more interested in football and used to play for a local team known as Ridgeway Rovers.

Beckham began his football career by becoming a part of the legendary ‘Class of ‘92’ youth players at Manchester United as he helped the club win the FA Youth Cup.

In 1992 Beckham made his debut for the senior team and in the January of the following year, he signed his first professional contract with Manchester United.

He became an integral part of the Manchester United side of the mid to late 1990s that dominated English football and in 1999 he helped the team win ‘the treble’ (the Premier League, the FA CUP, and the UEFA Champions League).

In 1998, David Beckham played for England in the World Cup in France and scored one goal in the group games against Columbia. However, the World Cup ended in tears for Beckham as he was sent off in the round of 16 games and England was ousted from the tournament in penalties.

In 2007, David Beckham moved to the Major League Soccer side LA Galaxy based in Los Angeles and played for the team for five seasons. During those five years, he also spent some time on loan at AC Milan; which led to complaints from the club’s fans. He scored 18 goals in 98 games for LA Galaxy.

He retired from professional football at the end of 2013. The following year Beckham bought an MLS expansion team for $25 million.

Here are some of the best highlights of David Beckham’s career:

“In my career, there are many things I’ve won and many things I’ve achieved, but for me, my greatest achievement is my children and my family. It’s about being a good father, a good husband, just being connected to family as much as possible.” –  David Beckham

“That was my way of getting through difficult times of low confidence – hard work.” – David Beckham

“I have always believed that if you want to achieve anything special in life you have to work, work, and then work some more.” – David Beckham

“As a footballer, you always want to test yourself against the best.” – David Beckham

“I don’t regret anything but that doesn’t mean that I don’t look back and think, what was I thinking?” – David Beckham

“I never do anything half-heartedly. I will continue to work hard and do everything I can to be successful, whatever I do.” –  David Beckham

View our larger collection of the best David Beckham quotes!

3 Lessons from David Beckham About Success

Let’s take a look at some of the best lessons we can learn from him about success:

In 1995  and against certain pundit’s better judgment – Manchester United had won the double with kids. David Beckham had played his part, but it was at Wimbledon on the first day of the following campaign that he emerged as a superstar.

Collecting the ball in his own half, the United no 10 glanced up and launched a rocket of a lob over Neil Sullivan from the half-way line with his right foot. No one could predict that that foot would one day feature in a Hugh Grant monologue but immediately English football had itself a new superstar.

In 1998, Beckham and his girlfriend Victoria “Posh Spice” Adams go on holiday to the South of France and take an army of paparazzi with them.

His footballing skills are becoming clear to everyone but with one sartorial swoop, Beckham – wearing a black and white sarong to dinner – becomes so much more than just a sportsman. A brand is born.

3. Bounce Back From Failure

For four years Beckham must have seethed over his red card in the 1998 World Cup, which many blamed for England’s loss to Argentina (in England, people burnt effigies!).

Naturally, England was drawn against their old rivals in the group stages at the 2002 World Cup, setting the stage for another Hollywood ending. This time, Becks was cast as the leading man, not the cartoon villain.

When Michael Owen went down (wonderfully easy, as no one remembers) to win a first-half penalty, fans wondered if Beckham was psychologically robust enough to deal with the spot-kick. He was, drilling it right down the middle to exorcise his French demons.

How much is David Beckham worth?

David Beckham’s net worth is estimated to be $450 Million.

How old is David Beckham?

How tall is David Beckham?

What do you think about David Beckham’s net worth? Leave a comment below.

Best known for Trainspotting, Slumdog Millionaire, and 127 Hours, Danny Boyle is an English director who has earned millions making magic behind the camera.

What is Toby Keith's net worth? Introduction As of ,...