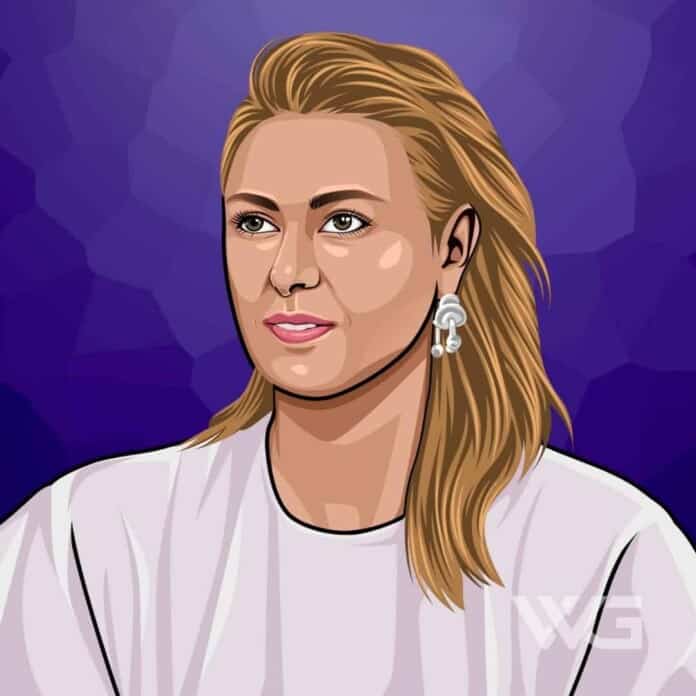 What is Maria Sharapova’s net worth?

She has been ranked world No. 1 in singles by the WTA on five separate occasions, for a total of 21 weeks. She is one of ten women, and the only Russian, to hold the career Grand Slam.

Maria Yuryevna Sharapova was born on the 19th of April, 1987, Nyagan, Russia, to Yuri and Yelena. Her mother had to stay back in Russia as she did not get visa and joined them after two years.

Sharapova was not granted admission to Nick Bollettieri Tennis Academy immediately as she was too young to join the academy.

She initially took up tennis training at the Rick Macci Tennis Academy and later signed a deal with the International Management Group (IMG), a global sports and talent organization based in New York.

When Maria Sharapova was merely 13 years old, she won the Eddie Herr International Junior Tennis Championships in the girls’ 16 division and was then awarded the ‘Rising Star’ award.

Since she was young, there were restrictions on how many professional events she could play. Therefore, she decided to concentrate on junior tournaments.

Sharapova won her first French Open title and became only the tenth woman to complete a Career Grand Slam in 2012. In the process, she also regained the world No. 1 ranking. She won a silver medal in the 2012 London Olympics.

In 2013, Sharapova was once again troubled by the shoulder injury, which affected her performance.

In 2014, Maria Sharapova won the second French Open title of her career by defeating Simona Halep. She also won the Stuttgart Open, Madrid Open, and China Open that year.

Here are some of the best highlights of Maria Sharapova’s career:

“Women’s tennis is getting faster and the girls are getting more athletic, so I need to push myself to become a better athlete. I think 2013 showed me, like a few other years how important being healthy is and how I must listen to my body. During this offseason, I have been a little smarter on how I train and how I treat my body.” – Maria Sharapova

“I love where I’m from. I don’t live there because of the circumstances, but all my family is there. It’s what’s inside, it’s not what’s outside that determines the culture and the feeling.” – Maria Sharapova

“A great tennis career is something that a 15-year-old normally doesn’t have. I hope my example helps other teens believe they can accomplish things they never thought possible.” – Maria Sharapova

“I had so many outs in my career. But when your love for something is bigger than all those things, you continue to keep getting up in the morning when it’s freezing outside, when you know that it can be the most difficult day, when nothing is working, when you feel like the belief sometimes isn’t there from the outside world, and you seem so small.” – Maria Sharapova

Now that you know all about Maria Sharapova’s net worth, and how she achieved success; let’s take a look at some of the best lessons we can learn from her:

1. Do What You Love, But Also Have a Conscience

Sharapova told the audience at the conference that it’s important to never take an opportunity for granted.

It’s paramount to work and lead with a moral conscience. ″When you love what you do, and you do it with passion and integrity, ” she says, “then you know what you stand for and who you are, and that’s why I fought so hard to get that back.”

For an athlete, retirement typically comes earlier than for other careers. For Sharapova, the ban could have prematurely ended her profession as a tennis champion.

″You always want to end your career or a chapter in your life on your terms and in your voice,″⁣ Sharapova says.

″⁣And to be in a moment where you felt like it could have ended on someone else’s terms was very difficult for me to accept. ”

3. Only Focus On What You Can Control

Sharapova says she’s learned to relax and let life run its course during the last 15 months. ″I learned that life is okay without tennis,″⁣ says Sharapova, who started candy business Sugarpova in 2012.

″Life can be okay, which is a scary thought because when you’ve done something for so long, you always think of, ‘Well, how am I going to feel when I don’t have that?’”

How much is Maria Sharapova worth?

Maria Sharapova’s net worth is estimated to be $180 Million.

How old is Maria Sharapova?

How tall is Maria Sharapova?

Maria Sharapova is a world-renowned professional tennis player who hails from Russia.

Sharapova is also known to have an avid interest in collecting stamps. She has her own website and has an immense fan following on social media platforms such as twitter, facebook, and more.

As of November 2022, Maria Sharapova’s net worth is approximately $180 Million.

What do you think about Maria Sharapova’s net worth? Leave a comment below.