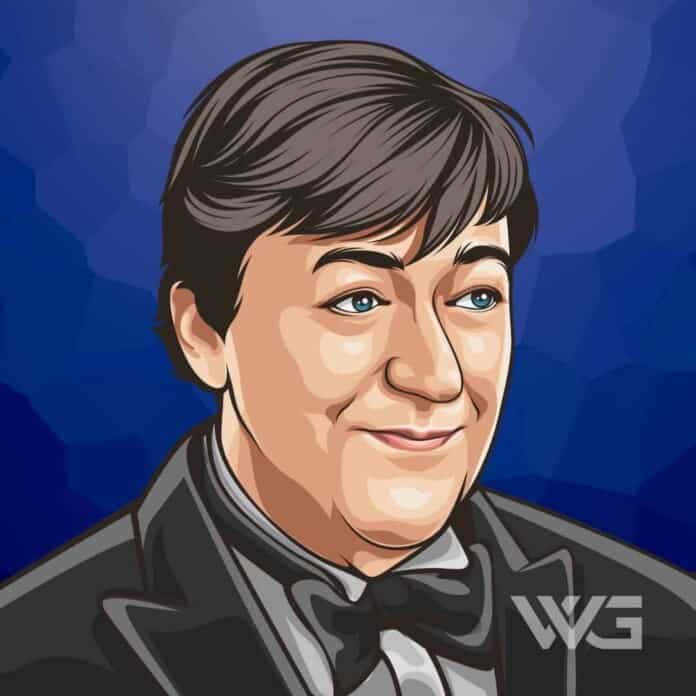 What is Stephen Fry’s net worth?

Stephen Fry is an English actor, poet, comedian, author, and radio presenter from Hampstead. Fry has overcome a very distressful childhood and adolescence and blossomed into a comedian during his days at Cambridge.

He is also mostly known for presenting several documentary films for television. Fry has also hosted quiz programs and he has written three novels.

As of February 2023, Stephen Fry’s net worth is approximately $40 Million.

Stephen Fry was born in Hampstead, London on the 24th of August, 1957. Fry attended Cawston Primary School and he was expelled from the Uppingham School at the age of 15, and later on from the Paston School too.

When Fry was 17 years old, he was jailed for three months for stealing credit cards from a family friend. Fry resumed studies at City College, Norwich after his release from the prison and gained a scholarship to Queens’ College.

Stephen Fry’s television career began in 1982 with ‘The Cellar Tapes’. After that, he also appeared in many serials such as ‘Alfresco’, ‘The Young Ones’ and ‘Happy Families’. In the middle of the 1980s, he starred in ‘Blackadder II’ and ‘Blackadder Goes Forth’ as General Melchett.

From 1990 to 1993, Fry starred in ‘Jeeves and Wooster, adapted from Jeeves stories, aired on ITV network, as Jeeves, with Hugh Laurie. In 2003, Fry starred in the BBC television ‘Absolute Power’. Fry began hosting ‘QI, a comedy panel game television quiz show in 2003.

In 2006, Fry narrated ‘The Story of Light Entertainment’ a British documentary on BBC. The documentary consisted of eight episodes, dedicated to facets such as double act, all-round entertainers, chat shows and comics.

Channel 4, featured ‘Stephen Fry’s 100 Greatest Gadgets’. He later presented a documentary titled ‘Fry’s Planet Word’ which was written by himself. The five-hour-long episodes were broadcast on two BBC channels in 2011.

Since then, Fry lent his voice to the role in an operetta ‘Paul Bunyan’ which staged at the Wales Millenium Centre with the Welsh National Youth Opera in 2013.

Here are some of the best highlights of Stephen Fry’s career:

“The point about manic depression or bipolar disorder, as it’s now more commonly called, is that it’s about mood swings. So, you have an elevated mood. When people think of manic depression, they only hear the word depression. They think one’s a depressive. The point is, one’s a manic-depressive.” – Stephen Fry

“It’s rather splendid to think of all those great men and women who appear to have presented symptoms that allow us to describe them as bipolar. Whether it’s Hemingway, Van Gogh… Robert Schumann has been mentioned… Virginia Woolf, Sylvia Plath… some of them with rather grim ends.” – Stephen Fry

“I’ve never had any illusions about being a lead actor in films because lead actors have to be of a certain kind. Apart from the beauty of looks and figure, which I cannot claim to have, there’s just a particular kind of ordinary-Joe quality that a film star needs to have.” – Stephen Fry

“I have pushed the boat out as far as I should in terms of taking on too many things. I’m getting older and I just could not take it anymore. I am now monitoring myself very closely and I’m just trying not to get into that sort of state again.” – Stephen Fry

“It’s not all bad. Heightened self-consciousness, apartness, an inability to join in, physical shame and self-loathing—they are not all bad. Those devils have been my angels. Without them, I would never have disappeared into language, literature, the mind, laughter and all the mad intensities that made and unmade me.” – Stephen Fry

How much is Stephen Fry worth?

Stephen Fry’s net worth is estimated to be $40 Million.

How old is Stephen Fry?

How tall is Stephen Fry?

Stephen Fry is a very talented man in many areas. He is mostly known for his three novels, his career as an actor, and being a successful comedian. Fry has lent his talents to dozens of successful movies and video games and serves as a guest or presenter in many television programs.

As of February 2023, Stephen Fry’s net worth is estimated to be roughly $40 Million.

What do you think about Stephen Fry’s net worth? Leave a comment below.

B.J. Penn is a master of Brazilian jiu-jitsu that became an icon in the UFC, and his mainstream appeal has made him one of the richest mixed martial artists in the world.