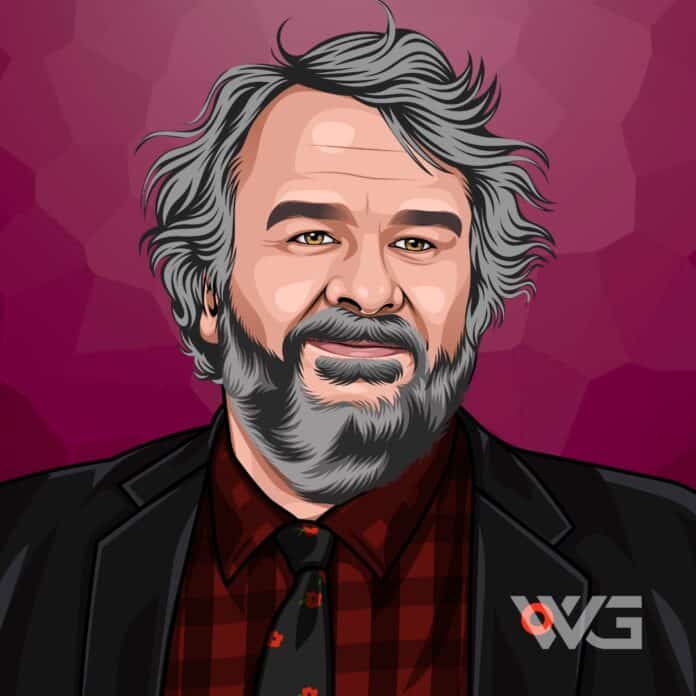 What is Peter Jackson’s net worth?

Sir Peter Robert Jackson is a film director, screenwriter, and producer from New Zealand who is best known for directing, producing, and writing the Lord of the Rings trilogy.

Thanks to his talents behind the camera, Jackson has become the third highest-grossing director of all time, with his movies grossing $6.5 billion worldwide.

Along with his directorial career, he also owns his own production company, WingNut Films.

As of February 2023, Peter Jackson’s net worth is estimated to be $1 Billion.

Growing up, Peter was an avid film fan, and when a family friend gave him a Super 8 camera, he started making short films with his friends.

As a child, he also made a World War II epic that he named The Dwarf Patrol, which is now featured on the Bad Taste bonus disc.

While in school, Peter had no interest in sports and instead immersed himself in filmmaking and editing, which he taught himself through trial and error.

When he turned 16, he dropped out of school and started working as a photo engraver for the Wellington newspaper.

Two years later, Peter invested in a 16 mm camera and began shooting what would become Bad Taste, which was released in 1987.

While Bad Taste was his first feature film, two years later, he went on to direct Meet the Feebles, a New Zealand puppet comedy musical.

In 1994, Jackson was chosen to direct Heavenly Creatures, an adaptation of the Parker-Hulme murders, which markedly differed in tone from his previous films.

Following the success of that film, Jackson went on to direct The Frighteners, a horror comedy that was filmed entirely in New Zealand.

Jackson was fortunate enough to win the rights to Tolkien’s Lord of the Rings trilogy, which he started filming in 1999.

This trilogy would stand out as one of his biggest successes to date, and it has made him synonymous with the franchise.

After his success with Tolkien’s works, Jackson directed King Kong in 2005, which also quickly became a critical and commercial hit.

In 2012, he returned to Tolkien’s Middle Earth with An Unexpected Journey, the first of The Hobbit trilogy, films which would earn Jackson a lot of praise from critics and fans alike.

While he released many successful films in 2018, he directed Mortal Engines, which unfortunately turned out to be a box-office flop with many negative reviews.

However, he came back in 2021 with The Beatles: Get Back, which garnered him two Emmy Awards.

While he is one of the richest directors in the world, not much information has been released about his exact career earnings.

However, we do know a few things about some of his biggest gains, though there is a bit of speculation.

Peter Jackson has earned a substantial amount of money during his career, which has helped make him a Hollywood billionaire.

As he continues working, it is expected that his incredible wealth will keep growing larger.

Peter Jackson and his partner, producer, and screenwriter, Fran Walsh, live together in New Zealand and have two children, Billy and Katie.

Jackson and his partner have collaborated many times, and Fran even served as the producer of The Fellowship of the Ring.

On social media, he can be found on his official Instagram account, where he posts behind-the-scenes photos of his films.

He also has his own official YouTube channel, where he posts trailers and productions diaries.

Peter Jackson has earned many awards during his career in Hollywood and even more nominations.

While all of his achievements are significant, some accolades have been more prestigious than others.

Here are some of Peter Jackson’s greatest career honors and awards:

While these are only a few of his greatest awards and honors, they are the most prestigious he has earned.

Like James Cameron, he has done very well to make a name for himself, and it is likely we will see him earn many more distinctions in the future.

How Does Peter Jackson Spend His Money?

Peter Jackson owns an impressive collection of real estate, including a $77 million commercial property in Miramar.

He also owns numerous properties in Wellington, New Zealand, that are worth a total of $150 million combined.

If that wasn’t enough, he also started building his Wairarapa estate in 2002, which is completely mindblowing.

Arguably one of the most expensive houses in the world, this home includes underground tunnels, castle ruins, and a complete recreation of Bag End hidden behind a bookcase.

It has been reported that Steven Spielberg and Danny Devito often visit the home, and even now, construction isn’t finished on the property.

Jackson has stated that he wants to build his own private airport and train line at his estate, though we are unsure when these will come to fruition.

He is also an aviation enthusiast who owns over 40 World War I warbirds that are still capable of being flown.

Along with these historical planes, he also owns some of the most expensive private jets in the world, including a Gulfstream G550 jet that costs an estimated $450 million.

Peter Jackson has reached many milestones during his career that have ensured his success in Hollywood.

However, some moments during his life have impacted his success more than others, making them stand out above the rest.

Here are some of the best highlights of Peter Jackson’s career:

Similar to how George Lucas has become synonymous with Star Wars, so too has Peter Jackson and the works of Tolkien.

Although these are only a few of his most significant career highlights, they are undoubtedly the most influential overall.

Peter Jackson was inspired to make films when he was a child and, since then, has become a master of his craft.

However, despite his remarkable success, he has remained humble about his accomplishments.

Here are our favorite quotes from Peter Jackson:

There is a lot that we can learn from Peter Jackson and his incredibly successful career as a film director.

Now that you know all about Peter Jackson’s net worth, we can take a look at what he can teach us about reaching our own goals.

Here are some of the best success lessons to learn from Peter Jackson:

1. Always Aim Higher Than You Can Achieve

You should always aim higher than you can possibly achieve because this way, you’ll have a chance to surpass your greatest expectations.

When you set the bar as high as possible, you’ll have a much greater chance to achieve more than you would have otherwise.

You can never please everyone, so there is no point in wasting your energy trying.

Unless someone offers constructive criticism, tune them out and instead focus on the people who appreciate your work.

It is easy to let success go to your head, which can end up holding you back in the long run.

If you let yourself get too cocky, you can end up letting your guard down and failing to work as hard as you need to in order to maintain your success.

Peter Jackson has become one of the most successful directors in Hollywood, thanks to his skills behind the camera.

During his career, he has directed numerous box-office hits that have helped to make him exceptionally wealthy.

Fortunately, he has no plans of retiring any time soon, so be sure to check back often so you won’t miss any updates to his career and fortune.

As of February 2023, Peter Jackson’s net worth is estimated to be $1 Billion.

What do you think about Peter Jackson’s net worth? Leave a comment below.