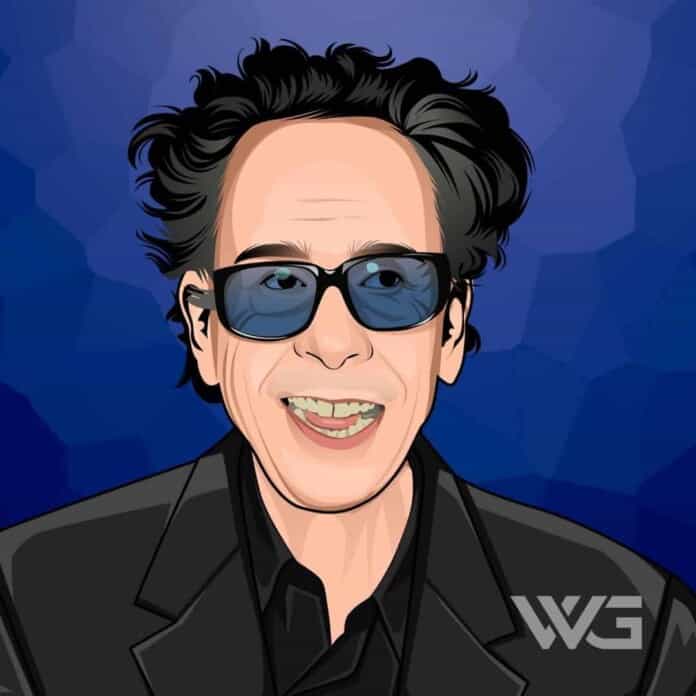 What is Tim Burton’s net worth?

Tim Burton is an American filmmaker, artist, writer, and animator.

He is known for his dark, gothic, and eccentric horror and fantasy films such as ‘Beetlejuice’, ‘Edward Scissorhands, The Nightmare Before Christmas’, ‘Dark Shadows’, and ‘Frankenweenie’.

Timothy Walter Burton was born on the 25th of August, 1958, in Burbank.

His mother was the owner of a cat-themed gift shop, while his father, a former minor league baseball player, worked for the Burbank Park and Recreation Department.

He attained his preliminary education from Burbank High School. An average student, he did not have much interest in the regular curriculum and instead had an affinity towards painting, drawing, and watching films.

Burton started off his career by working as an apprentice animator at the Walt Disney Studios. However, his stay at the studio was short-lived due to the creative differences that he had.

He followed this by coming up with his first live-action production ‘Hansel and Gretel’. In 1984, he released his next live-action short film, ‘Frankenweenie’. The year also marked his last term of service with the Disney.

In 2010, he came up with the film, ‘Alice in Wonderland’, which went on to receive two Academy Awards, for Best Art Direction and Best Costume Design.

He followed this up with ‘Dark Shadows’ which received mixed reviews from the critics for both its plot and performance by the actors.

He served as the co-producer of the film, ‘Abraham Lincoln: Vampire Hunter’, which released in 2012. The film was based on the novel by Seth Grahame-Smith. It opened to mixed response from the public.

The same year, he came up with the film ‘Frankenweenie’, which was a remake of his 1984 short film into a feature-length stop motion film.

Here are some of the best highlights of Tim Burton’s career:

“[Childbirth] is the weirdest thing I’ve ever seen. It’s like an ‘Alien’ movie. I started crying, it was so emotional … I was there in the room but I wasn’t planning on doing much. But then I see this blue pinhead come out and I think I said to the nurse, ‘What the hell is that?’ And then it turns into this round red thing in seconds. It’s just shocking.” – Tim Burton

“The great thing about visual horror films is there’s real potential for strong, beautiful imagery. It’s the one genre that really lends itself to creating strong images. And I’ve always loved that idea of windmills – your mind aimlessly spinning.” – Tim Burton

“I started to do stop-motion when I was a kid. You take a Super 8 and make some models, and move, click, move, click. All that. I love all forms of animation, but there is something unique and special to stop-motion: it’s more real and the set is lit like a set. But I think it’s also a kind of lonely and dark thing to want to do.” – Tim Burton

“I think of Ray Harryhausen’s work – I knew his name before I knew any actor or director’s names. His films had an impact on me very early on, probably even more than Disney. I think that’s what made me interested in animation: His work.” – Tim Burton

“Technology is technology and then art form and people’s creativity is another thing. Anything that helps an artist do anything – great! Technology for technology sake doesn’t mean much to me anyway.” – Tim Burton

3 Moral Lessons from Tim Burton and from Edward Scissorhands

Now that you know all about Tim Burton’s net worth, and how he achieved success; let’s take a look at some of the lessons we can learn from him:

1. People are Afraid of Different

Everyone is created differently because each individual has a special gift that they can offer to the world. If everyone were the same then life would be relatively boring because everything would be basic. We must learn from each other and allow each other’s gifts to make the world a better place.

No matter how different you may be or what you believe in – everyone deserves to be loved. Love is a powerful element that can change lives and make people feel whole.

3. Bad Things Happen to Everyone

It doesn’t matter if you’re good or bad – bad things happen to everyone.

There’s no doubt that you’ve experienced bad things in life but that doesn’t mean you’re a bad person. Life happens and when it does we must possess the willpower to overcome and have the stamina to forge forward.

How much is Tim Burton worth?

Tim Burton’s net worth is estimated to be $100 Million.

How old is Tim Burton?

How tall is Tim Burton?

Tim Burton is blessed with a great acumen for imaginativeness coupled with excellent drawing skills. In his four decades of career, he came up with dark, gothic, macabre, and quirky horror and fantasy films.

What do you think about Tim Burton’s net worth? Leave a comment below.

What is Mike Perry's net worth? Introduction  Mike Perry is a...