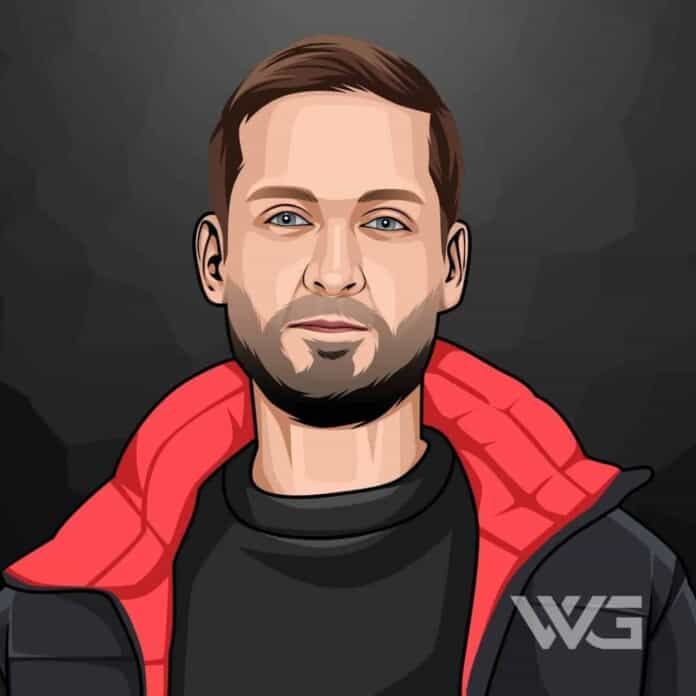 What is Tobey Maguire’s net worth?

As of November 2022, Tobey Maguire’s net worth is approximately $75 Million.

Tobey Maguire is an American actor and film producer from California.

Maguire is best known for his role as Peter Parker / Spider-Man in Sam Raimi’s ‘Spider-Man’ trilogy. His other major films include ‘Pleasantville’, ‘The Cider House Rules’, ‘Wonder Boys’, and ‘The Great Gatsby’.

Tobias Vincent Maguire was born on the 27th of June, 1975, in Santa Monica in California.

Maguire’s father used to be employed as a construction worker and sometimes as a cook while his mother was initially employed as a secretary before becoming a producer-screenwriter.

When Tobey Maguire was born, his parents weren’t married; they did so subsequently but got divorced in 1977 and that was the reason why Maguire had to grow up in different cities, shuttling between both parents as well as other relatives.

Maguire started off as a TV actor in bit-part roles in series like ‘Roseanne’ and ‘Blossom’; however, his first appearance in a film was in a non-speaking minor role in the film ‘The Wizard’ in 1989.

In 1995, Tobey Maguire was cast in a leading role in the film ‘Empire Records’ but due to his problems with alcoholism, he midway pulled out of the film.

He got the biggest break in his career in the year 2002 when he was cast in the role of Spider-Man in the eponymous movie. The movie was hugely successful and led to two sequels – ‘Spider-Man 2’ and ‘Spider-Man 3 in 2004 and 2007, respectively.

Tobey Maguire then went on to star in the 2009 film ‘Brothers’ which also featured Jake Gyllenhaal and his performance as a prisoner of war earned him rave reviews.

In 2013, he starred in Baz Luhrmann’s ‘The Great Gatsby’ alongside Leonardo di Caprio and followed it up with ‘Pawn Sacrifice’, in 2014, in which he played the role of chess legend Bobby Fischer.

Here are some of the best highlights of Tobey Maguire’s career:

“There are so many things I want to do. I want to work with great filmmakers, great actors, great scripts. And there’s no reason for me to do anything short of that because I’m 24, I don’t have a family, I don’t need to make tons of money, and I’m not dying to get famous.” – Tobey Maguire

“I just try to try to keep an attitude that I don’t know what I’m doing. Not to the point where I’m beating myself up, but I just go in thinking that I have a lot to learn. And I hope I still have that attitude 30 years from now.” – Tobey Maguire

“If you’re sitting in the audience, you probably can’t see the preparation and work that goes into creating a great scene or a great part, but I can assure you that a good film depends on a lot of different things falling perfectly into place.” – Tobey Maguire

“The most attention I get is in a book store or video shop when I go to the foreign film section. Sometimes that can be fun, but usually, those women want to talk about philosophy or something very dense. It’s not like they’re tearing off my shirt, you know.” – Tobey Maguire

“To me, the whole idea of fame and I think it can be a real test of somebody, of who they are. You know, ’cause some strange things happen. I’ve seen some peculiar things as far as a person just living their life.” – Tobey Maguire

3 Lessons from Tobey Maguire and Spiderman

Now that you know all about Tobey Maguire’s net worth, and how he achieved success; let’s take a look at some of the lessons we can learn from him:

1. Your Choices Makes Who You Are

Whatever comes our way, whatever battle we have raging inside us, we always have a choice. It’s the choices that make us who we are, and we can always choose to do what’s right.

Just because we are powerful compared to someone, this does not mean that we get the right to harass or exploit them. Instead, we should use our physical, mental, or financial powers to help the weak, the exploited and the destitute.

Peter loves MJ more than anything else still he can’t have her in his life because of his commitment to his crusade against criminals.

If Peter would have sacrificed his ambition for her then surely he would have regretted since the future with MJ will always be uncertain because of her insecurity.

You may get love by choosing her over your dreams, but you will never be happy. Chase your ambition.

How much is Tobey Maguire worth?

Tobey Maguire’s net worth is estimated to be $75 Million.

How old is Tobey Maguire?

How tall is Tobey Maguire?

Tobey Maguire is an American actor who is best known for his role as Spider-Man in the Spider-Man film trilogy.

He has also tried his hand at production for a few movies and is, without doubt, one of the most recognized faces in Hollywood.

As of November 2022, Tobey Maguire’s net worth is estimated to be roughly $75 Million.

What do you think about Tobey Maguire’s net worth? Leave a comment below.