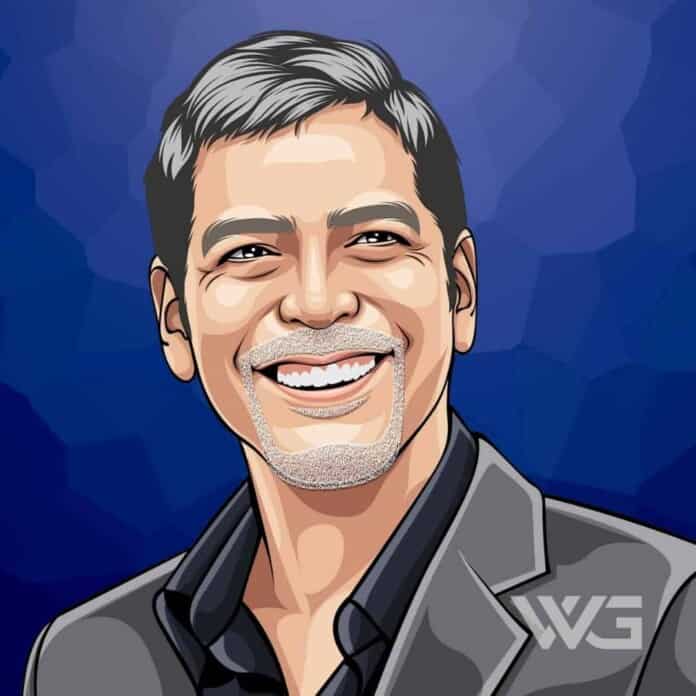 What is George Clooney’s net worth?

As of February 2023, George Clooney’s net worth is approximately $500 Million, making him one of the most sought-after A list actors in Hollywood, and one of the richest actors in the world.

George Clooney is an American actor, businessman, and filmmaker from Kentucky. Clooney recipient of three Golden Globe Awards and two Academy Awards, and he is best known for starring in films such as ‘Batman & Robin’, ‘Ocean’s Eleven’ and ‘Gravity’.

George Clooney was born on the 6th of May, 1961, in Lexington, Kentucky. Clooney is the son to Nina Bruce and Nick Clooney. His father is a former anchorman and television host, and his mother was a beauty queen and city councilwoman. Clooney is of German, Irish and English descent.

Clooney was raised in a strict Roman Catholic home. He began his education at the Blessed Sacrament School in Fort Mitchell, Kentucky. He attended St- Micheal’s School in Columbus.

George Clooney started to make money when he made a living selling women’s shoes, insurance and cutting tobacco. Clooney made his television debut in the 1978 mini-series ‘Centennial’.

He later got small roles on sitcoms like ‘The Facts of Life’ and ‘Roseanne’. A few years later, he landed the role that would mark the beginning of his career on the hit drama ‘ER’.

His real breakthrough took off when he started in the cult-classic ‘From Dusk till Dawn’. Clooney then took a different route starring alongside Michelle Pfeiffer in the rom-com ‘One Fine Day’. However, his lead role in ‘Batman & Robin’ was deemed a failure.

In 1998, he co-starred in ‘Out of Sight’ and ‘The Thin Red Line’. The following year, Clooney performed in ‘Three Kings’ alongside actor Mark Wahlberg.

Wahlberg and Clooney teamed up the following year again for ‘The Perfect Storm’ and starred in the award-winning ‘O Brother Where Art Thou?’. In 2001, he starred in the successful ‘Ocean’s Eleven’ trilogy.

In 2002, he made his directorial debut in ‘Confessions of a Dangerous Mind’. He also starred in the film ‘Solaris’ during the same time as he directed, produces, and starred in ‘Good Night, and Good Luck’ in 2005.

As of February 2023, George Clooney’s net worth is roughly $500 Million dollars.

Here are some of the best highlights of George Clooney’s career:

“I believe in all the qualities of being a liberal. I keep going back to all the great social events in our country’s history, starting with the Salem witch trials, where the conservative view was that they’re witches and should be burned at the stake, and the liberal view was there’s no such thing as witches.” – George Clooney

“In doing the screenplay for ‘Good Night, and Good Luck,’ the most important thing for me was to constantly go back to wherever the opposition would argue. So I had to keep reading all the books and articles about why McCarthy is such a good guy.” – George Clooney

“My life isn’t focused on results. My life is really focused on the process of doing all the things I’m doing, from work to relationships to friendships to charitable work.”– George Clooney

“My life isn’t focused on results. My life is really focused on the process of doing all the things I’m doing, from work to relationships to friendships to charitable work.” – George Clooney

3 Lessons Every Man Can Learn From George Clooney

Now that you know all about George Clooney’s net worth, and how he achieved success; let’s take a look at some of the lessons we can learn from him:

1. Look after your friends

George Clooney might be mega-rich and enjoy lavish parties with his Hollywood pals but old boy George never forgets his true friends. He demonstrated just how much he cares for them by presenting 14 of them with suitcases filled with $1 million in $20 notes.

As we make our way through life people are always ready to offer advice, but like most headstrong males we think we know it all.

Of course, this isn’t the case and something even the great Clooney realized early in life. The megastar has been quoted as saying, “You never really learn much from hearing yourself speak,” and there are no words greater to live by.

3. Learn from your failures

Clooney knows a lot about failure. He didn’t make it as an actor until he hit 34, spending much of his 20’s as a struggling actor working dead-end jobs. Despite constant rejections and missed opportunities, he stuck with it and eventually got his big break on ER.

How much is George Clooney worth?

George Clooney’s net worth is estimated to be $500 Million.

How old is George Clooney?

How tall is George Clooney?

George Clooney is, without doubt, one of the world’s best actors. Clooney has been included in Time’s annual ‘Time 100’ as one of the “Most Influential People in the World.”

He was twice named “The Sexiest Man Alive” by People magazine and his looks and charm also led to ‘Time’ magazine dubbing him ‘The Last Movie Star’.

As of February 2023, George Clooney’s net worth is estimated to be roughly $500 Million.

What do you think about George Clooney’s net worth? Leave a comment below.