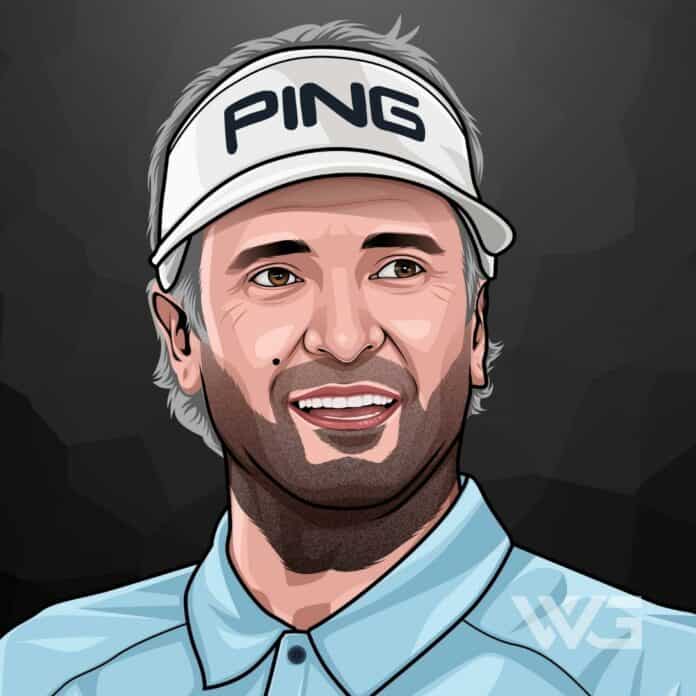 What is Bubba Watson’s net worth?

Bubba Watson is a multi-time major champion and one of the longest drivers in the PGA.

While he is still building his net worth, given his talent, we expect him to become even more wealthy as he keeps honing his skills on the fairway.

As a child, Bubba played golf for Milton High School, where future PGA Tour members Boo Weekly and Heath Slocum had attended just before him.

After graduation, Bubba played for Faulkner State Community College in Baldwin, Alabama, where he became a junior college All-American.

Bubba then transferred to the University of Georgia and played for the Bulldogs, the defending NCAA champions.

During his junior year, Watson helped the Bulldogs win the SEC title in 2000 and set himself up to enter the professional ranks by 2002.

Bubba Watson entered the Nationwide Tour as a professional golfer in 2002, and he stayed with the tour until 2005, when he qualified for the PGA Tour.

His first PGA Tour win would come five years later, in 2010, when he won the Travelers Championship in a sudden-death playoff, a victory he dedicated to his father, battling cancer at the time.

At the PGA Championship the same year, Bubba was the runner-up to Martin Kaymer, and he was also invited to the Ellen DeGeneres Show after sending the TV host a video of a trick shot he performed for her birthday.

In 2011, Bubba won his second PGA Tour event at the Farmers Insurance Open, finishing one stroke ahead of legend Phil Mickelson.

The next year, Watson won his first Masters title, and while he couldn’t hold on to it in 2013, he won it back in 2014 with his second Masters win.

Watson would win the Travelers Championship again in 2015, moving him to third place in the Official World Golf Ranking.

While the next two years weren’t his most impressive, by 2018, he won the Genesis Open, the WGC-Dell Match Play event, and the Travelers Championship.

In 2020, Watson announced he was leaving the PGA Tour to join LIV Golf as a team captain while recovering from a torn meniscus, though he intends to return to the fairway by 2023.

Bubba Watson is well on his way to becoming one of the richest golfers in the world, having earned a small fortune as a talented professional golfer.

Although we don’t know everything about his winnings, we do know how much he’s made from some of the most high-profile victories in his career.

Despite not being as wealthy as golf legend Jack Nicklaus, Bubba Watson is well on his way to becoming one of the wealthiest players in professional golf.

Bubba Watson married his wife, Angela, in 2004, and while they could not have a child naturally, the couple adopted a baby boy named Caleb in 2012 and later a baby girl, Dakota, in 2014.

Bubba performs as a member of the Golf Boys, and their single “Oh Oh Oh” can be found on Ben Crane’s YouTube Channel, with every 100,000 views earning a $1000 donation to charity.

Bubba Watson also has his own official website where he promotes his projects and companies he’s partnered with.

Bubba Watson has achieved a lot throughout his career on the fairway, and each of his victories has helped him grow his net worth.

While all of his achievements have been important, some have been more significant than others.

Here are some of the best accomplishments of Bubba Watson’s career:

Although Bubba Watson may not be as well-known in the mainstream as other big-name golfers, he has certainly made a name for himself in the PGA with all of his impressive victories.

How Does Bubba Watson Spend His Money?

Bubba Watson has a lot of money, and he has certainly put it to good use.

After winning the Masters in 2012, Watson used his $1.4 million in winnings to buy a home in Florida that previously belonged to Tiger Woods before the golf legend placed it up for sale.

While Watson has since placed the mansion up for sale himself, he did call it home from 2013 to 2015, and it has given fans a look into this golfer’s lavish lifestyle.

Also, in 2012, Bubba bought a General lee car from The Dukes of Hazzard TV series at an auction for $110k, though he would later paint over the confederate flag on the roof following the 2015 Charleston church shooting.

Watson has also given a lot of money to the Studer Family Children’s Hospital in Pensacola, Florida.

Bubb Watson has enjoyed many milestones throughout his career that have helped catapult him to fame and fortune.

However, some are more considerable because, without them, he may never have experienced the success he is now.

Here are some of the best highlights of Bubba Watson’s career:

Bubba Watson has definitely experienced a lot of success throughout his long career as a professional golfer.

Bubba Watson has been very vocal throughout his career, and some of what he’s said has stuck with his fans.

Even if you don’t follow professional golf, there’s just something down-to-earth and honest about Bubba that is admirable.

Here are our favorite quotes from Bubba Watson:

You don’t have to aspire to play in the PGA to learn something about success from Bubba Watson.

Now that you know all about Bubba Watson’s net worth, let’s look closer at what he can teach us about reaching our own goals.

Here are some of the best success lessons to learn from Bubba Watson:

Having a college degree is necessary for many things, but that doesn’t mean that you can’t cultivate other skills on your own time to help you become successful.

With the internet, you can learn an abundance of new skills to help set yourself apart from everyone else, and it is a resource that shouldn’t be squandered.

Plus, it can also open the door to new opportunities that you may not have found otherwise!

Not everyone can literally be their own boss, but that doesn’t mean you can act like it.

When you start being accountable for yourself and taking the prerogative in your workplace, you’ll be much more likely to climb the ladder and maybe one day sit in the boss’s chair for yourself!

It may be tempting to try and handle everything on your own, but without a strong support network to lean on, you can quickly burn out and fall behind your goals.

This doesn’t mean you have to rely on other people 100% of the time, but having people to keep you in line and support you when you stumble can be invaluable.

Bubba Watson is a multi-time major champion, and he’s quickly become one of the best golfers in the PGA.

While his net worth may not be as large as some other professional golfers, he is still competing and working to build his fortune.

Make sure to check back often to see just how much money Watson can earn as his career reaches new heights!

What do you think about Bubba Watson’s net worth? Leave a comment below.

Norman Powell is a current National Basketball Association player for the Los Angeles Clippers and former NBA champion who signed a massive contract in 2018.