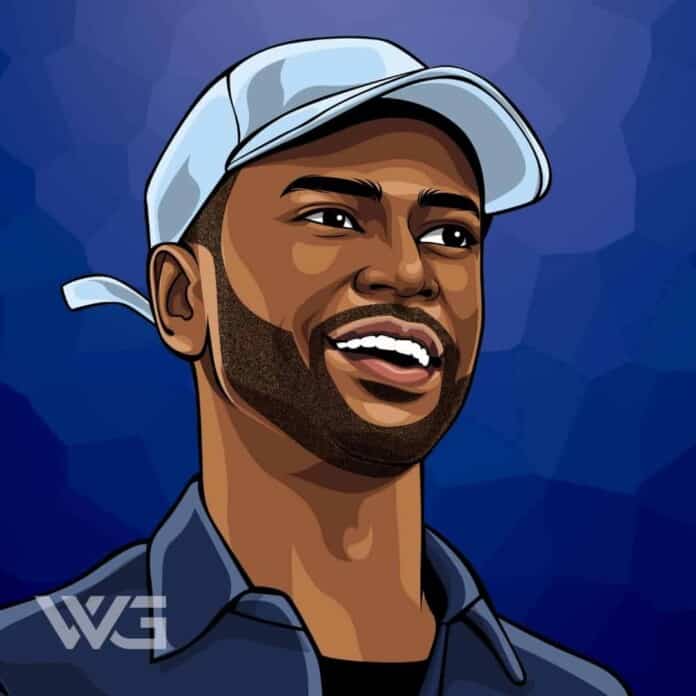 What is Big Sean’s net worth?

As of November 2022, Big Sean’s net worth is estimated to be roughly $26 Million.

Sean Michael Leonard Anderson, better known as “Big Sean,” is an American rapper from Santa Monica. Sean signed to Kanye West’s label GOOD Music in 2007, and Def Jam Recordings in 2008, which is his present label.

He gained his recognition when he released his debut mixtape in 2007 titled Finally Famous.

Sean Anderson was born on March 25, 1988, in Santa Monica, California.

When he was 3 years old, he moved to Detroit with his mother, where his grandmother raised him. His grandmother served in world war II, and she was one of the first black female captains of the United States Army.

Anderson attended Detroit Waldorf School. Later in his high school years, he started to find his interest in rapping. He had a rap battle that Kanye West heard about in a radio show. Kanye enjoyed his freestyle, and two years later, he signed Big Sean to his label GOOD music.

After being signed to Kanye West’s label Good Music, he issued his official debut, “Finally Famous,” featuring the single “My Last” with Chris Brown.

The album debuted at number three in the Billboard 200, and later that year, the single “Dance (ASS)” featuring Nicki Minaj became his first in the Top Ten.

Hall of Fame followed in 2013 with Nas, Miguel, Nicki Minaj, and Lil Wayne, and it reached number three on the pop chart.

Dark Paradise released in 2015, featuring artists like John Legend, Kanye West, Ariana Grande, and Drake. The album featured the number 11 pop hit “I Don’t Fuck With You” and went platinum.

Big Sean was featured on a handful of tracks, including DJ Loaf’s platinum “Back Up” and on “Champions” and DJ Khaled’s “Holy Key.” Sean later dropped his single “Bounce Back,” which reached the Billboard Rap Top Ten in 2016.

The singer Jhene Aiko titled “TWENTY88” with Big Sean, which debuted at the top of the Billboard R&B/Hip-Hop Album chart. Sean has also featured on Calvin Harris‘ “Feels” and “Miracles (Someone Special)” with Coldplay.

Currently, Sean is working on an upcoming album with DJ Khaled. However, the release date is not yet available.

Here are some of the best highlights of Big Sean’s career:

“When I graduated from high school, the teacher said I was throwing my life away following music, and the same teacher invited me back to speak at the school. I don’t say that to brag; I just want to be an example.” – Big Sean

“I come from a family of scholars who got their Master’s degrees. To my grandma – and to a lot of people – education was a way of making it out of the worst parts of their life.” – Big Sean

“My mom keeps me going, man. She deserves such a good life. I just wanna give it to her. My dad, too. My family, my friends keep me motivated. Just knowing my personal legend, just knowing what I’m supposed to do, that keeps me going.” – Big Sean

“As a crew, G.O.O.D. Music is taking it to levels that really haven’t been done collectively. Kanye is someone who knows how to make classic albums, a true thinker. He got me in the mindset of being a true thinker and always planning out every move you got going.” – Big Sean

“Put a plan together and do what you want to do in life. You are going to get to a point in your life where your dreams are in your hands, where the next step is right in front of you, and your next opportunity is on the other side of that door.” – Big Sean

“Definitely just growing up in general influenced me; Detroit happened to be where I was. I feel like the city definitely has impacted my life and made me who I am. Detroit has an unmistakable soul – nobody can duplicate the soul we bring to the game. From Motown to J Dilla to Eminem to anything.” – Big Sean

Now that you know all about Big Sean’s net worth and how he achieved success, let’s take a look at some of the lessons we can learn from him:

1. Have a vision and dedicate yourself to it

It’s important to have a vision and dedicate yourself to help kids with their careers. We need to get over the idea that everybody needs to go to college or that people who go to college are somehow smarter. So many college graduates are getting out now, and they can’t find jobs.

The music industry excites kids and advises people who have interests or ideas but might not know what their options are or what to do next. Do your research and approach it with love.

Give back to the people who have been on your side since day one. When you follow your dreams, it’s important to help yourself and to support one another.

How much is Big Sean worth?

Big Sean’s net worth is estimated to be $26 Million.

How old is Big Sean?

How tall is Big Sean?

Big Sean has been worked with many famous artists throughout his career, including Jhene Aiko, Drake, and Ariana Grande.

He got discovered by the rap king himself, Kanye West, and there’s no question that Big Sean’s net worth is set to go a lot higher.

What do you think about Big Sean’s net worth? Leave a comment below.