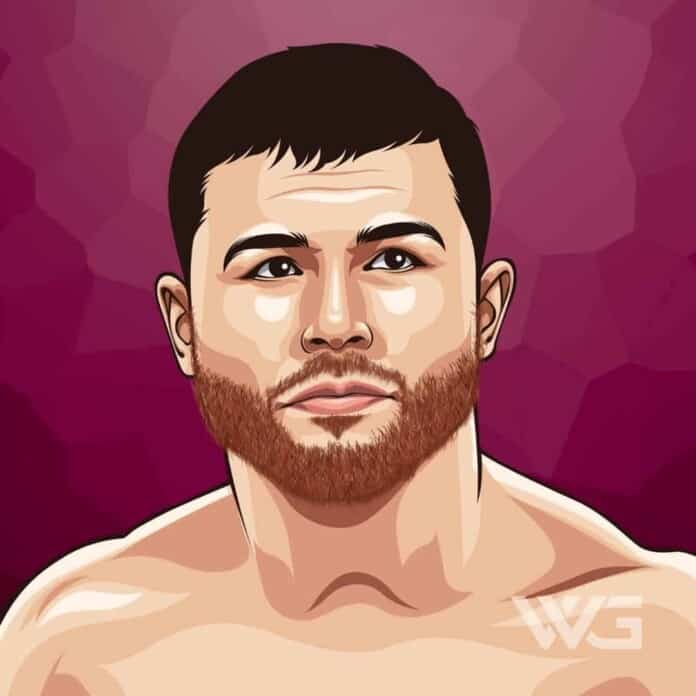 What is Saul Alvarez’s net worth?

Saul Alvarez was born on the 18th of July, 1990, in Guadalajara, Jalisco, Mexico. Growing up on his family’s farm, he learned horseback riding, which he continues today.

Álvarez is the youngest of eight children, seven of them boys; all of his brothers also became professional boxers. Among his brothers are welterweight boxers Ramón Álvarez, Ricardo Álvarez, and former Interim WBA World Champion, Rigoberto Álvarez.

He next fought against the former WBC welterweight champion Carlos Baldomir at the Staples Center in Los Angeles, California, on the Shane Mosley vs. Sergio Mora undercard.

On March 5, 2011, Álvarez defeated EBU welterweight Champion Matthew Hatton by unanimous decision, for the vacant WBC light middleweight belt. The bout was televised on HBO and took place at the Honda Center in Anaheim, California.

On 17 September 2011, Álvarez successfully defended his title with a TKO in Round 6 over The Contender competitor Alfonso Gomez at the Staples Center, Los Angeles, winning by technical knockout victory in the sixth round.

Here are some of the best highlights of Saul Alvarez’s career:

“I was made fun of at a young age. I would fight a lot in the streets, and it has a lot to do with the way I am today. It helped my development as a fighter, but what can I say?” – Saul Alvarez

“I’m training and preparing because nothing is predictable in boxing. I’m preparing for those rounds, and if it happens that I get a shot, whatever advantage I have, I will be ready for 12 rounds.” – Saul Alvarez

“It’s a big responsibility and great motivation to be a Mexican fighter who is admired, and I thank God for the support I get from Mexicans on both sides of the border.” – Saul Alvarez

“A fighter lives in his training camp, and I’m not always paying attention to what is happening on the outside. But I do know the Mexican people and the Mexican-American people in this country are very hard-working people. That’s my only comment about Donald Trump.” – Saul Alvarez

Now that you know all about Saul Alvarez’s net worth, and how he achieved success; let’s take a look at some of the best lessons we can learn from him:

Exercise should be a daily priority for everyone. It makes you physically, mentally, and emotionally stronger. It improves your health and your outlook. It is the panacea for just about everything.

Holding on to a grudge is like injecting poison into your body every day. Forgive and let go. There’s no other way. If your ego is preventing you from forgiving and letting something go, then tell your ego to take a hike. It’s getting in the way of your happiness and well-being.

When you find that thing you love to do with all your heart, every day feels like a gift. If you haven’t found your life passion, make it your mission to find it. The joy brings you spills over into all aspects of your life.

How much is Saul ‘Canelo’ Alvarez worth?

Saul ‘Canelo’ Alvarez’s net worth is estimated to be $180 Million.

How old is Saul ‘Canelo’ Alvarez?

How tall is Saul ‘Canelo’ Alvarez?

Saul Alvarez is one of the greatest boxers in the industry right now. He has held multiple world championships in three weight classes, including the unified WBA, WBC, Ring magazine, and lineal middleweight titles since 2018.

What do you think about Saul Alvarez’s net worth? Leave a comment below.