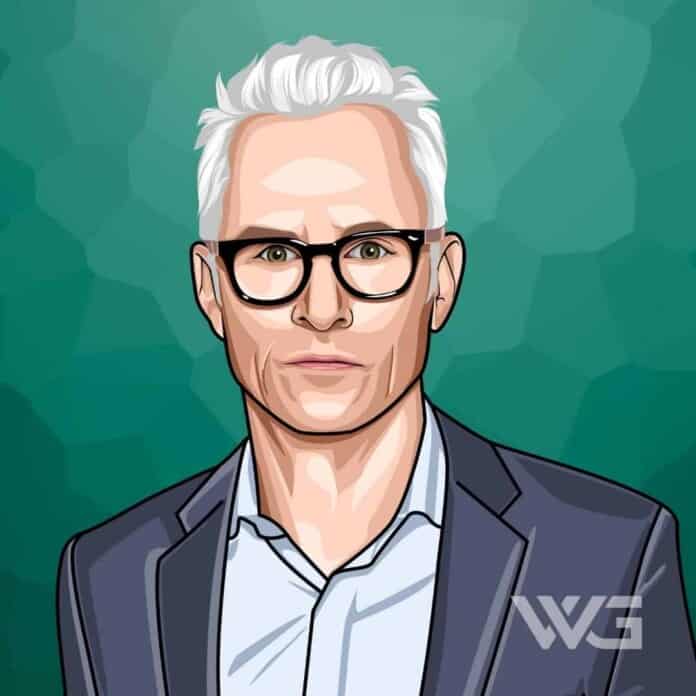 What is John Slattery’s net worth?

As of December 2022, John Slattery’s net worth is estimated to be roughly $10 Million.

John Slattery is an American actor and director from Massachusetts.

John Slattery was born on the 13th of August, 1962, in Boston, Massachusetts. His father, a leather merchant and his mother, a retired CPA raised him, his four older sisters and one younger brother in Boston as Roman Catholics.

He studied in ‘St. Sebastian’s School’ in Needham, Massachusetts. As a child, he aspired to be a baseball player and had great interest in watching television and movies.

Slattery made his debut in television with the 1988 series ‘Dirty Dozen: The Series’ featuring as Pvt. Dylan Leeds in 8 of its 14 episodes.

In 1989 he debuted in theatre with the play ‘The Lisbon Traviata’ that also had Nathan Lane.

He collaborated successfully with playwright Richard Greenberg that saw him starring in the latter’s plays including ‘Three Days of Rain’, ‘Night and Her Stars’ and ‘The Extra Man’ garnering much critical acclaim.

In 2003 he featured as Paul Moore starring opposite Julia Roberts as her on-screen boyfriend in the drama flick ‘Mona Lisa Smile’. The film was a big hit garnering $141.3 million worldwide.

Slattery directed two of the ten episodes of the romantic comedy web television series ‘Love’ namely ‘Tested’ and ‘Party in the Hills’ both of which originally released on February 19, 2016.

Here are some of the best highlights of John Slattery’s career:

“I think the moments that are difficult for anybody are when you see what your life could be, if only you had the courage to take the steps needed.” – John Slattery

“We all went through that teen phase of wearing that really soft fragrance. As I got older, I started loving men’s fragrances and cologne. I was so attracted to men’s cologne; I would spray it all over me.” – John Slattery

“Characters can become boring. That’s what’s tricky about television. It goes on and on – you’re playing this same character for five seasons and it gets easy to fall into just walking on the set and assuming you know how to play a scene.” – John Slattery

“I used to be more insecure about working, and I guess the older I get, the richer my life becomes, I don’t need to work as much as I used to. I mean, New York is a hard town to be in when you have nothing else to do besides show business. It’s brutal, especially as an actor, because you sit around with this low – grade fever of anxiety, waiting for the phone to ring. Or waiting for something.” – John Slattery

Now that you know all about John Slattery’s net worth, and how he achieved success; let’s take a look at some of the lessons we can learn from him:

Free yourself from attachment to material things. The persistent pursuit of the next best “thing” steals your freedom to think clearly and rationally, robs you of precious time and creates unnecessary additional stress in your life.

Work less, if you can. There will be no reward for your deathbed for all those extra hours you put in at the office, but there will be no regret for the extra time you spent with the people you cherish.

3. No One Else Can Make You Happy

Intimate relationships will distract you from yourself and offer temporary sanctuary, but facing your demons – your fears, insecurities, negative past experiences, wrong doings, and shortcomings – requires you to look in the mirror, alone.

How much is John Slattery worth?

John Slattery’s net worth is estimated to be $10 Million.

How old is John Slattery?

How tall is John Slattery?

John Slattery is an American actor and director who is particularly known for his characterization of Roger Sterling, one of the lead characters of American period drama television series ‘Mad Men’.

Starting his television career in the late 1980s he went on to establish himself as one of the most in-demand character artists with series like ‘Will & Grace’, ‘Sex and the City’ and ‘’Judging Amy’.

As of December 2022, John Slattery’s net worth is roughly $10 Million

What do you think about John Slattery’s net worth? Leave a comment below.