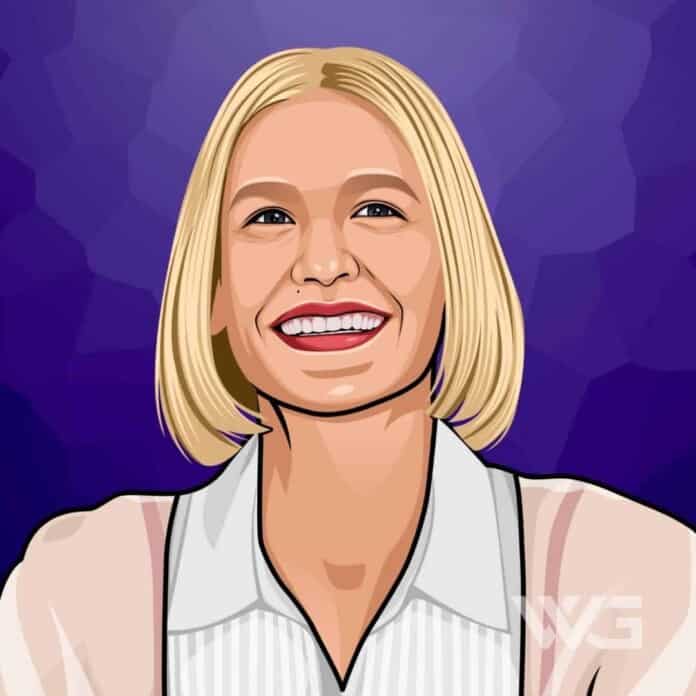 What is January Jones’ net worth?

January Jones is an American actress and model.

Jones is best known for her role in ‘Mad Men’ for which she was nominated for two Golden Globe Awards for “Best Actress. She portrayed Melissa Chartres in ‘The Last Man on Earth.’

Throughout her career, she has starred in films such as ‘American Wedding,’ ‘We Are Marshall,’ ‘The Boat That Rocked,’ ‘Unknown,’ ‘Seeking Justice,’ and ‘X-Men: First Class.’

January Kristen Jones was born on the 5th of January, 1978, in South Dakota. Jones is the daughter of Karen Cox and Marvin Jones.

Jones was named after January Wayne, a character in the Jacqueline Susann novel ‘Once Is Not Enough.’ Her family moved to South Dakota in 1979 but moved back to Sioux Falls in 1986. She graduated from Roosevelt High School.

Jones had supporting roles in movies like ‘Anger Management, ‘Love Actually,’ and ‘Dirty Dancing: Havana Nights.’ In 2005, she appeared as the U.S. border guard’s wife in the movie ‘The Three Burials of Melquiades Estrada.’ She played the role of Carol Dawson in ‘We Are Marshall’ in 2006.

Jones is known for her role as Cadence Flaherty in the comedy film ‘American Wedding,’ which is the third movie of the American Pie film series. She played a con artist in the ‘Law & Order’ episode titled ‘Quit Claim.’

Jones started her modeling career at the age of 18. She has modeled for Abercrombie & Fitch, Versace, Clearasil, and Kérastase. She has been on numerous fashion magazines such as Interview, Allure, Rolling Stone, Town & Country, The Hollywood Reporter, W, Harper’s Bazaar, Marie Claire, Tatler, Glamour, and Red.

How Does January Jones Spend Her Money?

January Jones likes to spend her money on real estate and jewelry.

Jones owns a beautiful home in the neighborhood of Topanga in Los Angeles. She bought the home in 2014 for $1.7 million. The home comes with four bedrooms and features a large backyard complete with a swimming pool and a zipline.

Jones has a huge collection of expensive jewelry. We can see pieces that include dangling diamond earrings, gold rings, diamond rings, and a diamond bracelet in her collection.

Here are some of the best highlights of January Jones’ career:

“In this business, I don’t know how you can have a plan or how you can orchestrate anything. But I’ve been lucky with my choices. I’m very strong-willed, so I’ve been able to stick with it. I’m lucky there.” – January Jones

“Am I being typecast as a horrible person? I don’t know. I don’t think so. But if it happens, I’d rather get to play that because there’s nothing fun about being sweet. Sweet can be so boring, so I’d be happy staying away from that.” – January Jones

“Going to New York to do whatever – show business – it just seemed fun. It seemed fun to go to the big city and meet all kinds of different people and maybe be famous. It was just exciting. So I wasn’t scared.” – January Jones

“My career really hit its high point when I was cast as a supporting actress in ‘American Wedding.’ I thought the script had a lot of depth and intelligence, and it really just jumped off the page.” – January Jones

“I lived in a town of 400 until I was like nine or ten. My dad coached all the sports – he was a gym teacher and health teacher for grades K-12.” – January Jones

“My dad was a trainer, so in my 20s and 30s, I didn’t work out because he was always pushing my sisters, my mom, and me to exercise. We would rebel and not do it. It’s not that I wasn’t active. As kids, my two sisters were runners, I played tennis, and we all swam.” – January Jones

Now that you know all about January Jones net worth and how she achieved success; let’s take a look at some of the lessons we can learn from her:

You are always doing exactly what you’re supposed to be doing in every moment and, once it passes, there will never be another one like it.

Great things take time, and we need to learn how to give time, time.

Even though many of us know that fear does not exist and that fear is only in our mind, we choose to be paralyzed by it, and we choose to allow it to control our lives, dreams, goals, and level of our happiness.

How much is January Jones worth?

January Jones’ net worth is estimated to be $10 Million.

How old is January Jones?

How tall is January Jones?

January Jones is an American actress who is best known for portraying Betty Draper in the series ‘Mad Men.’

During her time on the series, she was singled out for praise by critics, and she was nominated for two Golden Globes and an Emmy Award.

Outside her work on ‘Mad Men,’ she gained notoriety for playing in ‘The Last Man on Earth.’ She has starred in movies like ‘American Wedding,’ ‘We Are Marshall,’ ‘The Boat That Rocked,’ ‘Unknown,’ ‘Seeking Justice,’ and ‘X-Men: First Class.’

What do you think about January Jones’ net worth? Leave a comment below.