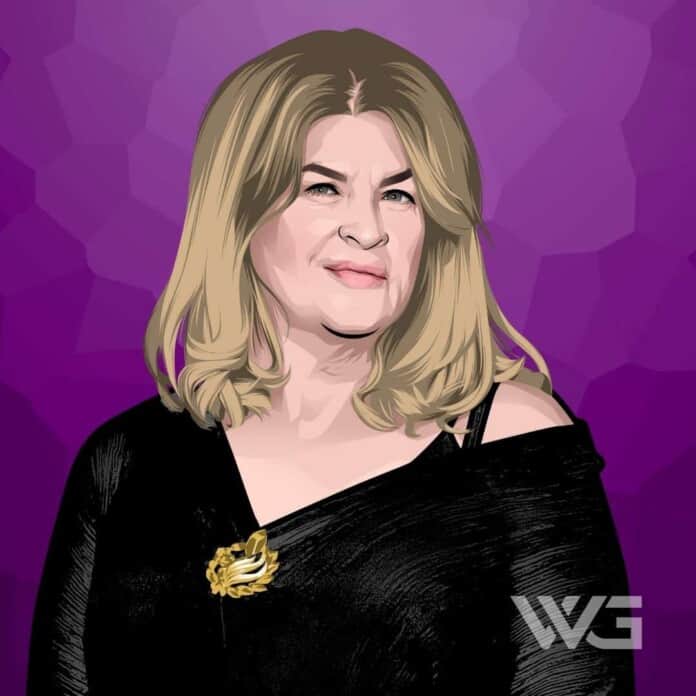 What is Kirstie Alley’s net worth?

Kirstie Alley is an American actress, producer, and model.

Alley is best known for her role as Rebecca Howe on the sitcom ‘Cheers’. From 1997 to 2000, she starred on the sitcom ‘Veronica’s Closet,’ earning additional Emmy and Golden Globe nominations.

She has appeared in movies such as ‘Summer School,’ ‘Shoot to Kill,’ and ‘Look Who’s Talking’.

In 1980, she appeared on the game show ‘Password Plus’. She described her profession as interior designer. The following year, an automobile accident involving a drunk driver killed her mother and left her father seriously injured.

In 1982, Alley made her film debut in ‘Star Trek II: The Wrath of Khan’. In the years following, Alley starred in a number of smaller films, including ‘One More Chance’ ‘Blind Date and Runaway.’

She starred alongside Mark Harmon in the comedy film ‘Summer School’ in 1987. The film was a box office success, grossing over $35 million in the United States. Later that year, she joined the cast of NBC sitcom ‘Cheers.’

She has won two Emmy Awards. She earned her second award for the movie ‘David’s Mother’ in 1994. For her contributions to the film industry, Alley received a motion pictures star on the Hollywood Walk of Fame at 7000 Hollywood Boulevard in 1995.

In 2011, Alley was announced as a contestant on ‘Dancing with the Stars.’ She was partnered with Maksim Chmerkovskiy. Their first dance, a cha-cha-cha, earned them the second-highest score, 23 points of a possible 30.

In May, Alley and Chmerkovskiy performed their final dance, also a cha-cha-cha, which earned them a perfect score of 30 out of 30.

Here are some of the best highlights of Kirstie Alley’s career:

“I’ve known Prince for many years – I worked on the “Raspberry Beret” video – and Kirstie [Alley] and I used to fight about him.He once sent a card [saying] he had penned a song about me, called “Palomino Pleasure Ride.” I remember bringing this card to work one time and showing Kirstie and saying: “See? Now who’s the better friend?” It was so ridiculous.” – Kirstie Alley

“When you’re the spokeswoman for a weight-loss program, everything is witnessed. I weigh in once a week with a witness. I have to sign an affidavit saying I cannot have any surgeries.” – Kirstie Alley

“The thing about me is, I don’t care what religion you are. If someone is attacking your religion, I will have your back, and I will defend you. I think that is the most repulsive thing a person can do, attack another person’s faith.” – Kirstie Alley

“Scientology helps you lose your insanities. One of the keys is, they say, ‘You’re in charge of your life, buster. You’re responsible for any condition you’re in.’ If I look at it that way, it helps.” – Kirstie Alley

“I believe that behind both the person who weighs 400 pounds and the one who weighs 85 there is a lot of baggage, and it has nothing to do with their bodies.” – Kirstie Alley

Now that you know all about Kirstie Alley’s net worth and how she achieved success; let’s take a look at some of the lessons we can learn from her:

There’s always somebody older, richer, more desperate than you.

There’s a lot more to life than how fat or thin you are.

How much is Kirstie Alley worth?

Kirstie Alley’s net worth is estimated to be $40 Million.

How old is Kirstie Alley?

How tall is Kirstie Alley?

Kirstie Alley is an actress, model, and producer. AShe is best known for her role on the NBC sitcom ‘Cheers.’

Alley has appeared in films such as ‘Shoot to Kill,’ ‘Look Who’s Talking,’ ‘Village of the Damned,’ ‘It Takes Two,’ ‘Deconstructing Harry,’ and ‘Drop Dead Gorgeous.’

What do you think about Kirstie Alley’s net worth? Leave a comment below.

Ana Ivanovic used her tennis ability to earn a huge income, becoming extremely wealthy as she beat some of the best players in the world.