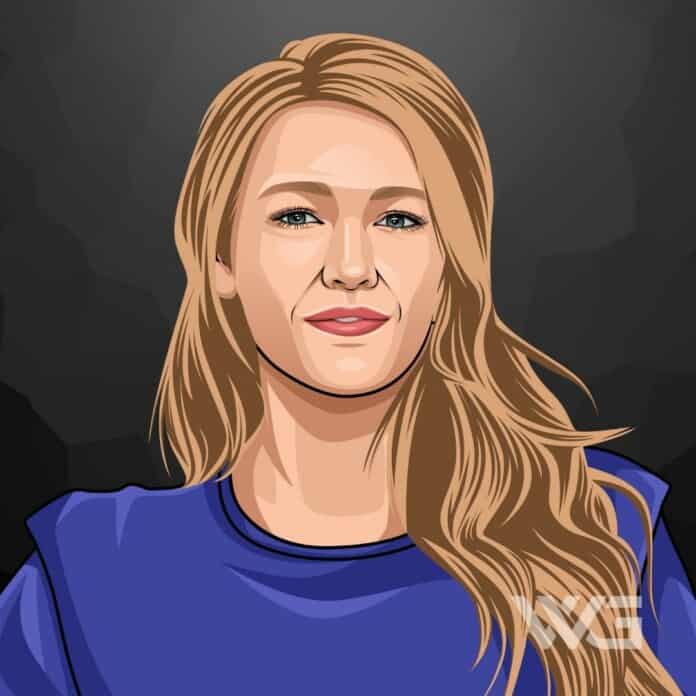 What is Blake Lively’s net worth?

Blake Lively is an American actress and celebrity known for her appearances in the hit show Gossip Girl and the films Savages and The Green Lantern.

Frequently voted among the hottest women in the world, she’s also known as one half of a Hollywood power couple through her marriage to Ryan Reynolds.

As of February 2023, Blake Lively’s net worth is estimated to be $30 Million.

Blake Ellender Brown was born in Los Angeles, California, on August 25th, 1987, to parents with ties to Hollywood’s film industry.

She was raised with one sibling and three half-siblings, including actress Robyn Lively who appeared in Teen Witch and Doogie Houser, and Jason Lively from the film National Lampoon’s European Vacation.

Her family’s background in acting led to Blake attending acting classes from a young age, and she proved popular in high school as class president and a member of the cheerleading team.

Lively was cast in The Sisterhood of the Traveling Pants in 2005, filming between her time at high school.

The success of The Sisterhood of the Traveling Pants launched Lively’s acting career, with smaller roles in movies such as Accepted and Simon Says.

She gained additional praise and recognition for her appearance in the Ben Affleck movie, The Town, proving herself as a capable dramatic actress.

In 2012, she starred in a movie by one of the richest directors in the world, Oliver Stone’s gangster thriller Savages.

Her co-stars in Savages included Taylor Kitsch and John Travolta, paving the way for her role in the Green Lantern alongside Ryan Reynolds.

Widely considered to be one of the hottest women in the world, Blake Lively has earned additional income through endorsements and sponsorships.

This includes serving as a brand ambassador for some of the most expensive makeup brands in the world, such as L’Oreal.

Blake Lively’s career has seen her involvement in a variety of movies and television shows that have increased her income.

Her net worth has continued to increase with her combined income from movie and television roles as well as endorsements and sponsorships.

Here’s a breakdown of Blake Lively’s annual net worth:

Blake Lively began dating Ryan Reynolds while working on the film The Green Lantern, and the pair married in 2012.

One of the hottest celebrity weddings of the time, it made the news when Reynolds gave Lively one of the most expensive engagement rings in the world.

Blake Lively has appeared in numerous critically and commercially successful movies and television shows over her career in the film industry.

Here are some highlights from Blake Lively’s career:

How Does Blake Lively Spend Her Money?

While Blake Lively has some way to go to compare to some of the richest actresses in the world, her impressive net worth nevertheless gives her considerable disposable income.

Through her marriage to Ryan Reynolds, she’s purchased some of the most expensive houses you can buy, including a mansion costing $5.7 million.

Lively has also spoken about her fondness for some of the most expensive perfumes in the world, claiming to wear great perfumes even when she isn’t using makeup.

Blake Lively has had an impressive career that shows no signs of slowing down, working with some of the biggest names in the movie industry.

Here are some of the best highlights of Blake Lively’s career:

With dozens of interviews over the course of her impressive career, Blake Lively has had plenty of insights on a wide range of topics.

Here are our favorite quotes from Blake Lively:

An inspiration to millions of people around the world, there’s a lot we can learn from Blake Lively’s experiences.

Here are some of the best success lessons to learn from Blake Lively:

1. Dress Up Well Because It Makes You Feel Good, Not For Others

Blake Lively is known for dressing to please herself, once saying, “I never think about how other people will respond to the way I dress.”

2. Make Sure You Surround Yourself With People Who Inspire You To Do Better

In an interview with Elle magazine, Lively said, “I’d rather be myself than be spending any time or energy on somebody that I didn’t feel sure about.”

While some women prefer to hide away after giving birth, Lively has shown that there is no shame in being proud of your post-pregnancy body.

That concludes this guide to Blake Lively’s net worth, exploring the movie and television highlights and endorsements that have helped her increase her wealth.

With her career continuing to evolve and her net worth changing, we’ll be updating this article to bring you the latest information, so be sure to check back in the future.

As of February 2023, Blake Lively’s net worth is estimated to be $30 Million.

What do you think about Blake Lively’s net worth? Leave a comment below.