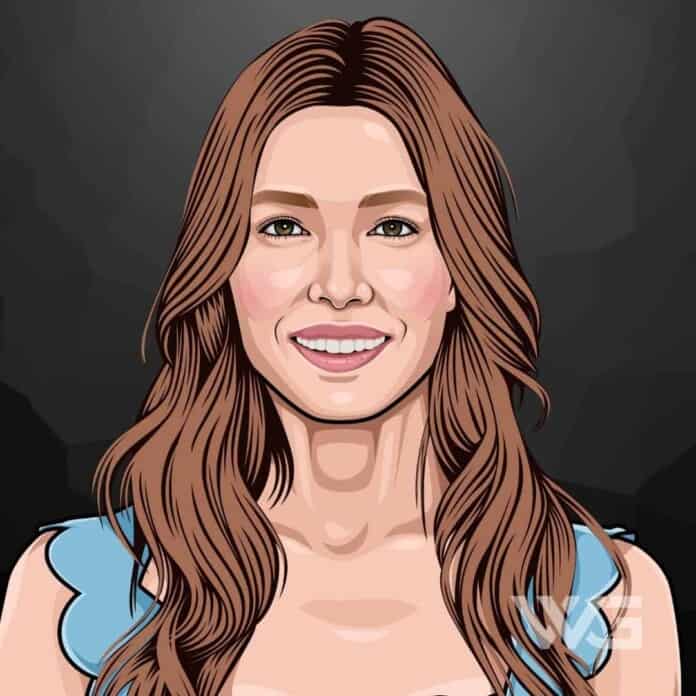 What is Jessica Biel’s net worth?

Jessica Biel is an American actress and model who started out as a vocalist in musicals before getting cast as Mary Camden in 7th Heaven, a TV series that ran from 1996 to 2006.

Since her big break, Biel has gone on to star in numerous movies and TV shows, earning multiple accolades and nominations for her work.

In 2017, she even served as an executive producer for the USA Network drama The Sinner, something that earned her both a Golden Globe and Primetime Emmy Award nomination.

Born Jessica Claire Biel in Ely, Minnesota, on March 3rd, 1982, her mother, Kimberly, was a homemaker and spiritual healer, while her father, Johnathan, was a business consultant who worked at General Electric.

As a child, her family moved quite a lot, which resulted in Jessica having lived in Texas, Illinois, and Connecticut, before finally settling down in Boulder, Colorado.

While she was growing up, she played soccer and trained as a gymnast, though after winning a karaoke contest at eight, she set her sights on becoming a musical star.

Jessica Claire Biel initially trained as a vocalist, appearing as the lead in The Sound of Music and Beauty and the Beast in her hometown.

Her first film role was in It’s a Digital World, a musical that was directed by Paul Greenberg, followed by her first feature film role as Peter Fonda’s granddaughter in Ulee’s Gold, released in 1997.

While these films did well, it was her casting as Mary Camden in 7th Heaven that catapulted her to stardom and led to her being featured in her first top-billing role in The Texas Chainsaw Massacre.

Despite the horror film receiving negative reviews, it ended up being a commercial success that opened even more doors for the young actress.

With 33 films under her belt, Jessica Biel has branched out into behind-the-scenes work, becoming an executive producer for the USA Network’s The Sinner and Hulu’s Candy.

Jessica Biel’s wealth has been bolstered by her many films and TV shows.

While her combined net worth comes largely from her higher-earning husband, her salary is still substantial, not including earnings from box office sales.

Here’s an estimated overview of her yearly salary:

While playing Mary Camden in 7th Heaven, Jessica began dating castmate Adam LaVorgna, from 1998 to 2001 and, after breaking up, entered into a long-term relationship with Chris Evans that lasted from 2001 to 2006.

In 2007, Biel began dating Justin Timberlake, and the pair became engaged in 2011, marrying a year later at the Borgo Egnazia in Fasano, Italy.

While Justin Timberlake has two dogs, Jessica owns a pit bull named Tina, who she posts pictures of often on Instagram with #TuesdayswithTina.

Along with her family life, Jessica Biel is active in many charitable causes and even co-founded the Make the Difference Network alongside her father.

Biel has also partnered with WomenCare Global, a nonprofit healthcare organization dedicated to helping provide sex education to girls around the world.

Jessica Biel has won many awards throughout her acting career, as well as prestigious nominations from the Golden Globes and Emmys.

Here are some highlights from Jessica Biel’s career:

How Does Jessica Biel Spend Her Money?

Like most Hollywood stars, Jessica Biel spends her money extravagantly and owns over 15 properties, eight cars, and three luxury yachts that give even the most expensive yachts in the world a run for their money.

Some of the cars Biel owns include a Lamborghini Aventador, a Volvo XC90, a BMW X8, an Audi Q8, and a Bugatti Chiron, which is one of the most expensive cars in the world, though she doesn’t drive it often.

Her investments are also considerable, as she currently owns 12 stocks with a combined value of $25 million.

She has also purchased a luxury 8,900 sqft home for $22 million and spent another $3 million to have it renovated.

Along with this home, she also owns Justin Timberlake’s penthouse in Tribeca alongside her husband, which is valued at $20.2 million. This penthouse is located in the same area where many other stars, such as Ryan Reynolds and Blake Lively, also own expensive property.

Here are some of the best highlights of Jessica Biel’s career:

Jessica Biel has a lot of great quotes, many of which are quite motivational!

There is a remarkable amount of wisdom to be found in what this actress says.

Here are our favorite quotes from Jessica Biel:

Now that you know all about Jessica Biel’s net worth, we can look at some of the important lessons she can teach.

Being as successful as she is, there is a lot that can be learned from her!

Here are some of the best success lessons to learn from Jessica Biel:

Jessica Biel got to where she is by taking chances and exploring opportunities off the beaten path.

After having found success on TV and in drama, her role in the horror film The Texas Chainsaw Massacre came as a surprise to many, but she knocked it out of the park, despite being hesitant about playing the part at first.

Biel knew from a young age that she wanted to perform, and she pursued this dream relentlessly.

However, she is also a fantastic cook who often posts about her culinary adventures and even opened a kid-friendly restaurant, Au Fudge, in Los Angeles.

While the restaurant did close down in 2018, the actress still enjoys cooking and baking whenever she can, which shows that regardless of what your day job is, you should always find time to enjoy the hobbies that you love.

Jessica Biel has spoken about becoming more confident as she has gotten older, and we imagine this hasn’t been easy after growing up in the spotlight.

However, this is a great life lesson for everyone, and it teaches us that we should embrace who we are even if that is easier said than done.

We may not be award-winning actors, but our experiences, personalities, and skills make us unique and capable of great things.

Jessica Claire Biel has enjoyed an amazingly successful career, and her net worth reflects just how valuable she is among the Hollywood stars.

Although she may not be one of the highest-paid actresses in the industry, she is a master of her craft who knows how to make money.

What do you think about Jessica Biel’s net worth? Leave a comment below.