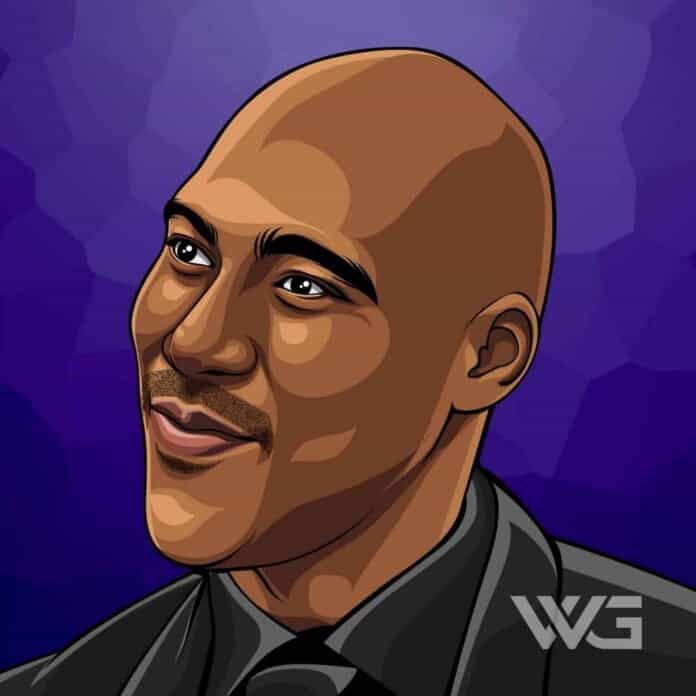 What is LaVar Ball’s net worth?

LaVar Christopher Ball is an American businessman and media personality from Los Angeles.

In 2015 Ball was recognized when he and his son made sports headlines in CBS Sports. The family continued their success featuring in SLAM magazine and in TV interviews.

LaVar Christopher Ball was born in Los Angeles, California on the 23rd of October, 1967. Ball grew up with his four brothers.

Ball attended to Canoga Park High School where he was a prominent quarterback on the football team. He was interested in sports during his early life, but he never thought he could make a career out of it.

He was invited for the NFL’s tryouts in the mid-1990’s and joined the New York Jets. In 1995 he managed to score 28 yards in kick returns. After his football career in school, he decided to quit and start a new career as a personal trainer.

After his early career as a football player, he switched his career to being a businessman. Ball laid the foundation of “Big Baller Brand” which began quite well.

The company made a successful profit in the first few months of being launched. Ball promoted the company on national TV and compared it with Adidas and Puma.

His son Lonzo was associated with UCLA playing basketball at a professional level and started to promote his father’s brand. In 2017 “Big Baller” launched their first sports shoes, which gained a lot of attention.

American athletes such as Shaquille O’Neil criticized the pricey shoes while many others came in support. Following that year Ball announced the launch of a signature shoe for his youngest son.

In December 2017 Ball announced his plans to form the JBA. LaVar had great plans for the future of the league but has later been reported that it is just a way to bring Big Baller more publicity.

Ball is known for his controversial remarks, he first made his national news when CBS Sports wrote a feature about the Ball family. He began displaying his arrogance against media interactions. Following that year he claimed that his son Lonzo was a better player than Stephen Curry.

In an interview, Ball claimed that he could defeat Michael Jordan in a “one-on-one” basketball match which also gained a lot of attention in the media.

LaVar Ball is known for his own brand “Big Baller Brand” and his controversial remarks. His statements have gained a lot of attention. Ball has invited further controversy when he questioned the Los Angeles Lakers.

Here are some of the best highlights of LaVar Ball’s career:

“So when I tell them, ‘Yeah, he coming because Lonzo’s here,’ people look at me crazy and be like, ‘So he’s just coming just because your son is here?’ Yeah. He’s young and passes the ball, so he’s coming because my boy is here.” – LaVar Ball

“So now you got him going 100 miles an hour then stop, “So now you start getting injuries. So now, people like, ‘Man he’s injury prone.’ ‘Cause Y’all injuring him.” – LaVar Ball

“Realistically you can’t win no championship with three white guys because the foot speed is too slow.” – LaVar Ball

“These boys were born to go pro. Your mom’s a P.E. teacher, I’m a personal trainer, your last name is Ball. How much more lined up can you be?” – LaVar Ball

“We already got our own brand. Triple B’s. Lonzo is going to be the first one drafted with his own brand. That don’t happen.” – LaVar Ball

View our larger collection of the best LaVar Ball quotes!

How much is LaVar Ball worth?

LaVar Ball’s net worth is estimated to be $4 Million.

How old is LaVar Ball?

How tall is LaVar Ball?

LaVar Ball is known for his business endeavors and controversial remarks. He started his early career as a football player, and today he is a successful media personality and businessman.

What do you think about LaVar Ball’s Net Worth? Leave a comment below.