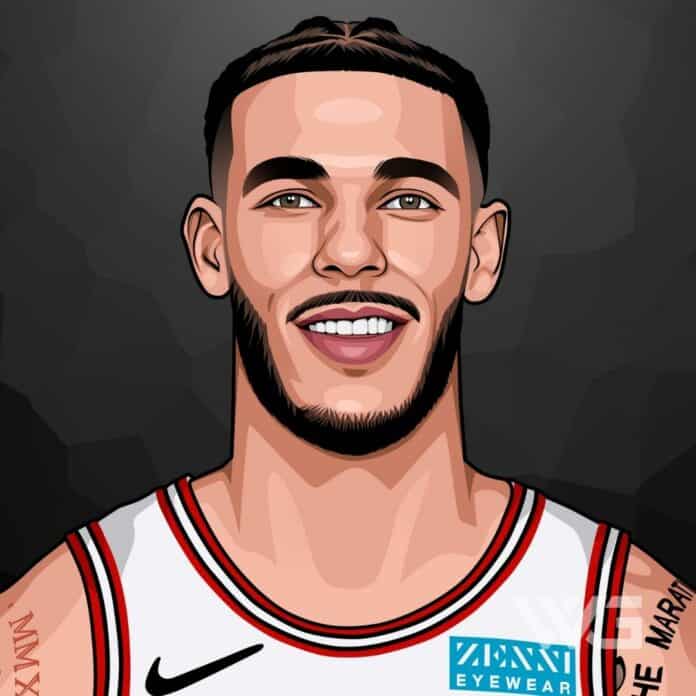 What is Lonzo Ball’s net worth?

Lonzo Ball is an American professional basketball player who is currently a point guard for the NBA’s Chicago Bulls.

Ball was the second overall selection in the 2017 NBA Draft after spending his college career with the UCLA Bruins.

Ball comes from a basketball family with his parents, Tina Ball and LaVar Ball, playing in college themselves, while Lonzo played alongside his brothers LiAngelo and LaMelo Ball.

Lonzo was considered the best in the family and was an All-American point guard and California Mr. Basketball as a senior in 2016.

After being named the Naismith Prep Player and Morgan Wootten National Player of the Year, Ball decided to stick around Southern California to attend UCLA as a five-star recruit.

Lonzo Ball played just one season of college basketball and led the NCAA in assists while being named an All-American and First-Team All-Pac-12.

He decided to forgo his final three seasons of NCAA eligibility and declared for the 2017 NBA Draft, where he was selected second overall by the Los Angeles Lakers ahead of Jayson Tatum and the Boston Celtics.

Ball had a strong first year and was named to the NBA All-Rookie Second Team thanks to 10.2 points, 6.9 rebounds and 7.2 assists per game.

He spent two seasons with LeBron James and the Lakers before being traded to the New Orleans Pelicans as part of the deal that brought Anthony Davis to Los Angeles.

After two more seasons in New Orleans, Ball was traded once again, this time to the Chicago Bulls, signing a new contract in the process worth $80 million over four years.

Lonzo Ball received millions right out of the gate as a professional basketball player due to being the number two overall draft pick.

Ball received over $6 million during his rookie season from his contract, and has continued to increase his salary each year since.

On the current Bulls roster, Ball is the fourth-highest paid player behind Zach LaVine, DeMar DeRozan, and Nikola Vucevic.

The figures of Lonzo Ball’s earnings are based on his publicly announced contracts, but are not guaranteed to be 100% accurate.

Following the 2022-23 NBA season, Ball has two years remaining on his contract with the Chicago Bulls and then he’s set to become an unrestricted free agent.

Over the course of those two years, Ball is set to make $20.4 million and $21.3 million, and as long as he stays healthy, he should receive an extension.

As one of the most hyped high school basketball players in quite some time, Lonzo Ball was already established as a popular name and earned endorsement deals left and right.

Ball is part of his family’s apparel business, Big Baller Brand, and has since added to his net worth with solid production in the NBA.

The figures of Lonzo Ball’s net worth are estimated with regard to his NBA salaries and endorsements and are not guaranteed to be 100% accurate.

Here’s a breakdown of Lonzo Ball’s annual net worth:

As long as Ball continues to be a solid producer for the Bulls, his net worth will continue to climb as he plays for one of the richest NBA teams and owner Jerry Reinsdorf.

Ball and his many endorsements and business ventures will go on even after his basketball career, too, so money isn’t much of an issue for the young point guard.

The Ball family is one of the most famous in basketball and they operate the Big Baller Brand of clothing and shoes that was started by LaVar Ball, with Lonzo being a majority owner.

While in high school, Ball began a relationship with soccer player Denise Garcia and the two have been on-and-off ever since then and have yet to be married.

Along the way, Ball and Garcia had a daughter named Zoey Christina Ball who was born in 2018.

Lonzo Ball was one of the most decorated high school basketball players in history and continued to rack up awards in college basketball and the NBA.

Ball has earned many individual accolades as a player, with most of them coming from his amateur days.

Here are the top awards and achievements from Lonzo Ball’s career thus far:

If he’s able to stay healthy, Ball is almost guaranteed to add several more individual awards to his resume and hopes to be named an NBA All Star.

Ball has yet to reach the NBA Playoffs, as the Los Angeles Lakers won the NBA Finals in his first season away from the team.

How Does Lonzo Ball Spend His Money?

Ball’s family has set out with a goal of making him among the richest NBA players in the world through branding.

As part of his new contract, Lonzo Ball started shopping for some of the most expensive houses in the world and found the right one.

Lonzo Ball’s house is located in the Sherman Oaks neighborhood of Los Angeles, and the 6,200 square-foot home cost him $7.3 million and includes six bedrooms with eight bathrooms.

That’s not the first time Ball has spent millions, as he paid $5.2 million for an estate in Chino Hills before moving to Sherman Oaks.

Ball also has a collection of some of the most expensive cars in the world, including a Dodge Challenger SRT Demon, a Mercedes-AMG G63, and the crown jewel, the Rolls Royce Dawn, valued at nearly $400,000.

Lonzo Ball’s high school career was just one highlight after another as he racked up prestigious individual awards.

Ball played just one season in college but had plenty of highlights, and has continued his success into his NBA career.

Here are some of the best highlights of Lonzo Ball’s career:

Now entering the prime of his career, Ball is hoping that he can become an All Star while also boosting his clothing line called Big Baller Brand.

Ball is also searching for his first NBA Playoffs appearance, which he should easily be able to accomplish as a member of the Chicago Bulls.

Because his family has been in the headlines so much, Lonzo Ball has offered up many quotes throughout his career.

Whether he’s talking about his basketball career, his personal life, or his business ventures, Ball has had a lot of memorable soundbites.

Here are our favorite quotes from Lonzo Ball:

Lonzo Ball grew up in a family that was ready for the spotlight, and many knew he’d be a pro basketball player one day.

Ball knows all about basketball after having been one of the greatest high school and college basketball players of his generation.

Now that you know all about Lonzo Ball’s net worth, there’s a lot to learn from the former number two pick.

Here are some of the best success lessons to learn from Lonzo Ball:

Even without basketball, many people know who Lonzo Ball is due to one brand endorsement deal after another and his Big Baller Brand line of clothing.

Lonzo and his father LaVar Ball have done a tremendous job of keeping his name at the forefront of everybody’s mind that’s even remotely familiar with basketball.

Because of this, Lonzo is set up for success long after his playing days are over and he looks to cash in on his branding.

Lonzo Ball’s father said that the point guard was destined to be a professional player long before his rookie season in the NBA.

In fact, LaVar said that Lonzo would be great from the moment he was born, putting a lot of pressure on him to be great.

Instead of giving into the hype and coasting on past achievements, Lonzo has dedicated himself to getting better on the court and the hard work has paid off.

3. There Will Be Setbacks

After being a heralded amateur player, Lonzo Ball was expected to be an NBA great right from the get-go, and even got to play for his hometown Lakers.

Things don’t always work out the way people expect, though, and Ball wound up with the Pelicans and the Bulls while having to watch the Lakers win a title without him.

Ball has also suffered through injuries, but he hasn’t let a change of scenery or physical setbacks stop him from achieving his dreams.

Lonzo Ball came into the league with a ton of hype, but shoulder and knee injuries have held him back from reaching his full potential.

After spending time with the LA Lakers and New Orleans Pelicans, Ball is looking to become the franchise cornerstone for the Chicago Bulls.

The team is banking on him to be just that after giving him $80 million, hoping that it translates into an NBA Championship.

What do you think about Lonzo Ball’s net worth? Leave a comment below.