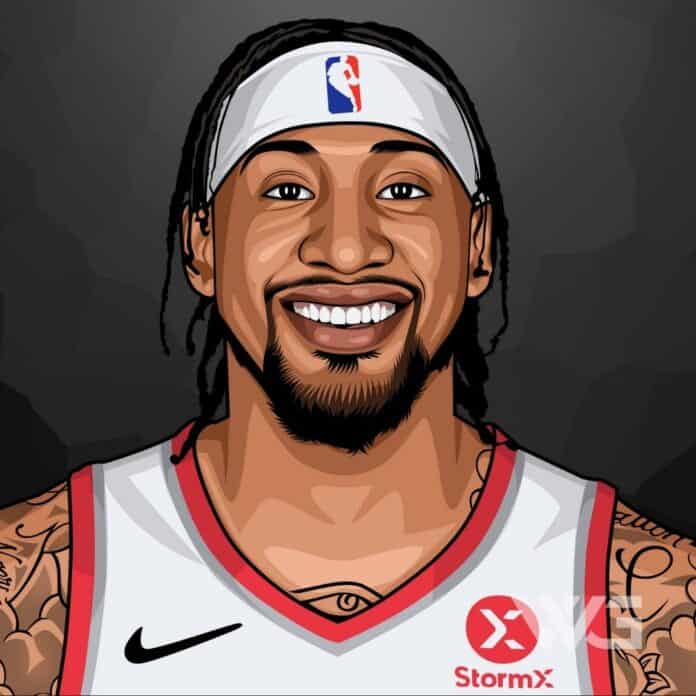 What is Robert Covington’s net worth?

Robert Covington is an American professional basketball player who is currently a forward for the Los Angeles Clippers.

Covington attended Tennessee State University during his college days, and signed as an undrafted free agent with the Houston Rockets in 2013.

As of January 2023, Robert Covington’s net worth is estimated to be $46 Million.

Robert Covington was born December 14, 1990 in Bellwood, Illinois where he also grew up.

Surprisingly, Covington didn’t receive many scholarship offers and enrolled at Tennessee State University where he played for four seasons.

During his college career, Covington earned Ohio Valley Conference awards in each of his four seasons, but was not selected in the 2013 NBA Draft.

In his rookie season, Robert Covington spent most of his time with the Rio Grande Valley Vipers of the NBA D League where he won several awards, including NBA D League Rookie of the Year.

Covington was surprisingly waived after his rookie season and was picked up by the Philadelphia 76ers and a multiyear deal, almost immediately becoming a starter.

Over more than four seasons in Philadelphia, Covington averaged 12.9 points, 5.6 rebounds and 1.6 steals per game before being traded to the Minnesota Timberwolves as part of the Jimmy Butler deal.

During his career, Covington has played for five different franchises, and is currently playing for Steve Ballmer and the Los Angeles Clippers after being acquired in a trade from the Portland Trail Blazers.

During the early parts of his career, Robert Covington wasn’t making all the much money for an NBA player with just over $3.5 million over his first four years.

Covington’s annual salary skyrocketed after the 2016-17 NBA season, going from one of the lowest paid players in the league to making eight figures per year.

The figures of Robert Covington’s earnings are based on his publicly announced contracts, but are not guaranteed to be 100% accurate.

Following the 2022-23 NBA season, Covington has one year remaining on his contract with the Clippers worth $11.69 million, all of which is guaranteed.

Covington is scheduled to become an unrestricted free agent after the conclusion of the 2024 NBA Finals, allowing him to sign wherever he wants.

Robert Covington was simply getting by financially at the beginning of his professional career, and is now living comfortably.

After several years of barely making the league minimum, Covington earned a salary increase that saw him establish a comfortable net worth.

The figures of Haywood Highsmith’s net worth are estimated in regard to his NBA salaries and endorsements and are not guaranteed to be 100% accurate.

Here’s a breakdown of Robert Covington’s annual net worth:

Thanks to the uptick in his salary, Covington is set for life and still has another guaranteed $11.69 million that he’ll receive during the 2023-24 NBA season.

Though he’s getting toward the end of his career in his mid 30s, Covington can still earn a few million more in his twilight years before retirement.

Robert Covington was raised by his parents Dennis and Teresa Bryant in Illinois and taught him basketball at a young age.

Covington began a relationship with model Amirah Dyme, who has millions of followers on social media platforms including Instagram.

From a previous relationship with Kaylee Anderson, Covington has a son named R.J., and he had a daughter with Dyme in 2022 before the couple had a messy split.

Robert Covington has been considered one of the best defensive players of his time and has been recognized by the league for his abilities.

When he came into the NBA, Covington was one of the best players in what’s now the NBA G League, earning his spot on rosters at the top level.

Here are some of the best awards and achievements from Robert Covington’s career:

It took a while for Covington to start making playoff appearances, but his recent string of success has him eyeing the ultimate prize of an NBA title.

Covington is one of the most successful players that have yet to reach an NBA Finals, with his best finish being the Western Conference Semifinals.

How Does Robert Covington Spend His Money?

Robert Covington isn’t one of the richest NBA players in the world after playing his first few seasons toward the league minimum, but has established a solid net worth.

Known to be thriftier with his earnings, Covington puts a lot into charity including building homes in inner-city neighborhoods and giving upwards of $1 million to his alma mater, Tennessee State.

Covington has a modest house with a small inground pool and opts for a standard driveway (without the most expensive cars in the world) that has a basketball hoop instead of a full court in his backyard.

Interested in fashion, Covington does drop some money on himself with clothing and jewelry, but has saved most of the money that he’s earned in his NBA career.

Robert Covington defied the odds by establishing a long-term career in the NBA despite not being drafted in 2013.

Now in his 10th season in the league, Covington has been able to amass a lot of big moments during his lengthy career.

Here are some of the best highlights of Robert Covington’s career:

Even after 10 seasons in the league, there is still a lot that Covington is setting out to achieve, including winning an NBA title.

Covington is also searching for his first NBA All-Star Game appearance, and getting both would be the crown jewel on a fine career.

Each year, hundreds of players go undrafted and end their professional careers, but Robert Covington kept plugging away.

The result has been a long NBA career that has taught Covington a lot, and in turn, he has produced some great nuggets of knowledge.

Here are our favorite quotes from Robert Covington:

Robert Covington wasn’t likely to make the NBA at all, but instead has stuck around for a decade and is still going strong.

Almost immediately, Covington proved that he belonged at professional basketball’s highest level and hasn’t looked back.

Now that you know all about Robert Covington’s net worth, there are some valuable lessons that the undrafted veteran can teach.

Here are some of the best success lessons to learn from Robert Covington:

1. You Can Start From Anywhere

Almost no Division I basketball teams were interested in Robert Covington, which is why he landed at the small Tennessee State program.

The odds of Covington making it to the NBA after attending TSU were astronomical, and he wasn’t drafted in 2013.

Instead of giving up, Covington became the best player in the NBA D League and earned his spot at the top level.

There has always been a stigma regarding mental health, especially in professional sports, but it almost cost Covington his career.

Covington was going through a deep depression after being traded so many times, and sought out help through therapy instead of retiring.

The result was Covington getting in touch with his mental health and finding a support system that allowed him to truly have fun while playing basketball again.

With the millions of dollars and exposure that you get as an NBA player, you have a chance to give back to your community.

Few people know that as well as Robert Covington, who has donated time and money to each city that he’s called home, with a focus on mental health.

Covington has also developed a real estate fund for Chicago’s inner city, teaming up with former players including Luol Deng and Matt Barnes.

Robert Covington is now in the latter part of his career, and has contributed a lot to the NBA.

Covington is one of just a handful of people to play for 10 NBA seasons despite not being drafted into the league.

Now, Covington is searching for that first NBA Championship that will truly define his unorthodox career.

As of January 2023, Robert Covington’s net worth is estimated to be $46 Million.

What do you think about Robert Covington’s net worth? Leave a comment below.