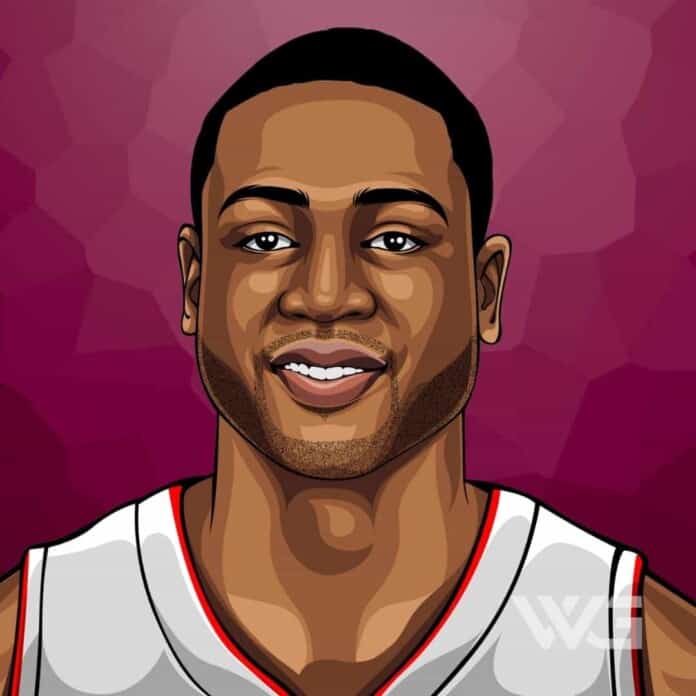 What is Dwyane Wade’s net worth?

As of February 2023, Dwyane Wade’s net worth has accumulated to about $170 Million.

Dwyane Wade is an American basketball player who currently plays for the NBA’s Chicago Bulls. Having started his career in 2003 by playing for the Miami Heat, he has come along way since then.

He grew up as an alienated child in a crime-ridden neighborhood. And having his parents split when he was only an infant he was raised for the majority of his life by his grandmother and older sister.

When Dwyane was about eight years old, he began living with his father as he was now earning a decent income. And although he recalls missing his mother, he has now said that he recognizes that she was a drug addict and not a good mother.

Despite being in an environment which was full of violence and crime, Dwyane was determined not to get involved and not follow the same path as many of his peers did.

In high school, he became an athlete and played both football and basketball, and he quickly became one of the star players of the Harold L. Richards High School team. During this time he was living with his girlfriend’s family and doing quite poorly with his academics.

Since he didn’t do well in school, he would not get into a reputable college, but he soon found Marquette University which would later lead him to the beginning of his professional career.

When he first began his studies at Marquette University, he joined the basketball team but unfortunately could not play due to his low test scores.

However, he did not let this stop him from playing the game; he remained by the team’s side and advised them on defenses and scoring. In the years to come, he made sure to do well in school.

Dwyane immediately became the best player on his team averaging around 17 points per game. He led his team to win the Conference USA and to be one of the final four at the NCAA tournament.

In 2003 he said goodbye to his Marquette team and was drafted by the Miami Heat team in the first round that year. He made his NBA debut in the 2003-2004 season and scored an average of 16.2 points each game.

Since Miami Heat was a considerably weak team before Wade; he was the very first player ever on the team to get an NBA honor. Eastern Conference named him the player of the year in 2004 and that very same year he led his team to win a bronze medal in the Olympics.

During his second season on the team Wade significantly improved and was averaging around 24 points per game. In 2006 he led the Miami Heat to an NBA victory.

After a severe knee injury, he continued to play, but his numbers were beginning to drop significantly, and after surgery, in the 2012-2013 season he still had the lowest point average of his entire career.

After struggling for so many years on the Miami Heat team, he decided to leave and sign a two-year contract with the Chicago Bulls. His debut appearance on the Chicago Bulls was in the 2016-2017 season.

Here are some of the best highlights of Dwyane Wade’s career:

“Success means being satisfied with what you do every day. It’s being proud of the better person you are becoming.” – Dwyane Wade

“My belief is stronger than your doubt.” – Dwyane Wade

“Nobody knows that they’re going to be Champions – you have to work to get there.” – Dwyane Wade

“I think the biggest thing I’ve learned is to not really worry what people will say or think about what you wear. You have to wear what feels good on you, what you feel comfortable in. And I’ve just learned to not really care.” – Dwyane Wade

View our larger collection of the best Dwyane Wade quotes!

3 Rules for Success from Dwyane Wade

Now you know all about Dwyane Wade’s net worth, and how he achieved success; let’s take a look at some of the success lessons we can learn from him:

1. You define your own success

Your success is measured by how satisfied you are with yourself. Being proud of the person you’ve become is the critical element of being successful because ultimately you live to achieve your goals and fulfill your dreams so once you get there, you should be pretty proud of yourself.

2. Don’t let other people’s doubts get in your way

Never let doubt get in the way of you becoming successful. The faith that you have in your self should always outweigh other people’s doubts.

3. You have to work hard to accomplish your goals

Nothing comes for free and if you want to accomplish something you’ve got to commit, work hard, and be patient because your hard work will soon pay off.

How much is Dwyane Wade worth?

Dwyane Wade’s net worth is estimated to be $170 Million.

How old is Dwyane Wade?

How tall is Dwyane Wade?

Dwyane Wade is a well-known American basketball player that has played for some of the greatest teams in the NBA.

As of February 2023, Dwyane Wade’s net worth is approximately $170 Million.

What do you think about Dwyane Wade’s net worth? Leave a comment below.