This is a powerful collection of 41 Mark Cuban quotes about succeeding in business and in life. This list of quotes is awesome for any entrepreneurs reading.

Mark Cuban, the Shark Tank billionaire, has a lot of powerful advice for other business owners, and a lot of it is stored within these short Mark Cuban quotes.

Check them out, and enjoy!

1. “Treat your customers like they own you. Because they do.” – Mark Cuban

3. “Open offices keep everyone in tune with what is going on and keep the energy up. If an employee is about privacy, show him or her how to use the lock on the bathroom.” – Mark Cuban

4. “Everyone is passionate about something. Usually more than one thing. We are born with it.” – Mark Cuban

5. “If you’re going to compete with me or one of my businesses, you’d better recognize that I’m working 24 hours a day to kick your ass.” – Mark Cuban

6. “I create offbeat advice; I don’t follow it. I rarely take third-party advice on my investments.” – Mark Cuban 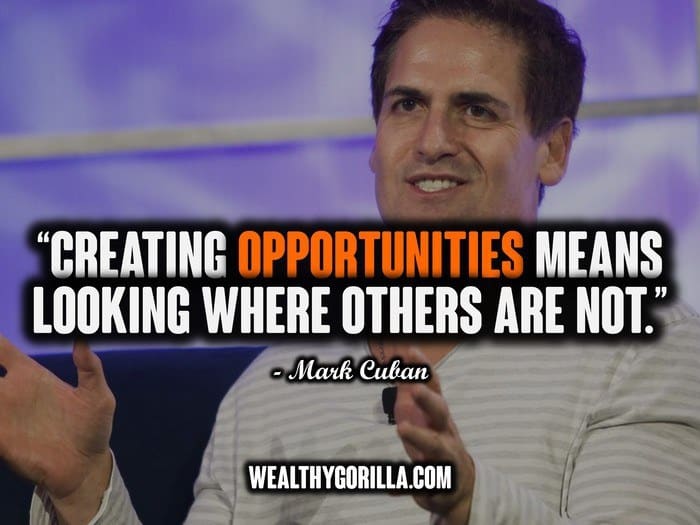 7. “Creating opportunities means looking where others are not.” – Mark Cuban

8. “You’ve gotta be differentiated and unique. You’ve gotta know what your core competency is and be great at it.” – Mark Cuban

9. “It doesn’t matter how many times you have failed, you only have to be right once.” – Mark Cuban

10. “Find something you love to do. If you don’t make money at it, at least you love going to work.” – Mark Cuban

12. “Once you have found out what you love to do, there is only one goal: to be the best in the world at it.” – Mark Cuban

13. “For every one of my businesses, what would I have to do to kick my own ass? What ever business you have, there is always someone trying to put you out of business. It’s better for you to figure how they’re going to do it, than they do it.” – Mark Cuban

14. “Because if you’re prepared and you know what it takes, it’s not a risk. You just have to figure out how to get there. There is always a way to get there.” – Mark Cuban

15. “I worked hard and smarter than most people in the businesses I have been in. It’s not in the dreaming, it’s in the doing.” – Mark Cuban

16. “We can’t ever forget that the Internet now is just a staid utility. The exciting platforms are software applications that are very, very simple.” – Mark Cuban 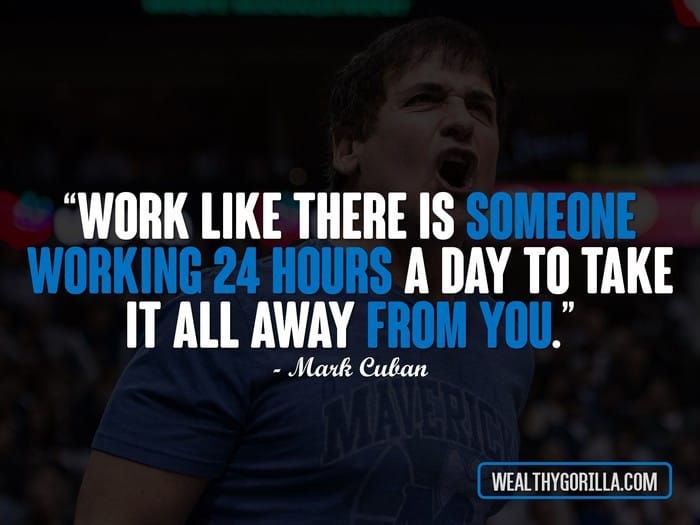 17. “Work like there is someone working 24 hours a day to take it all away from you.” – Mark Cuban

19. “When you turn your team upside down and try to figure out what the culture of the team is, you take the greatest risk a team can take.” – Mark Cuban

20. “Don’t start a company unless it’s an obsession and something you love. If you have an exit strategy, it’s not an obsession.” – Mark Cuban 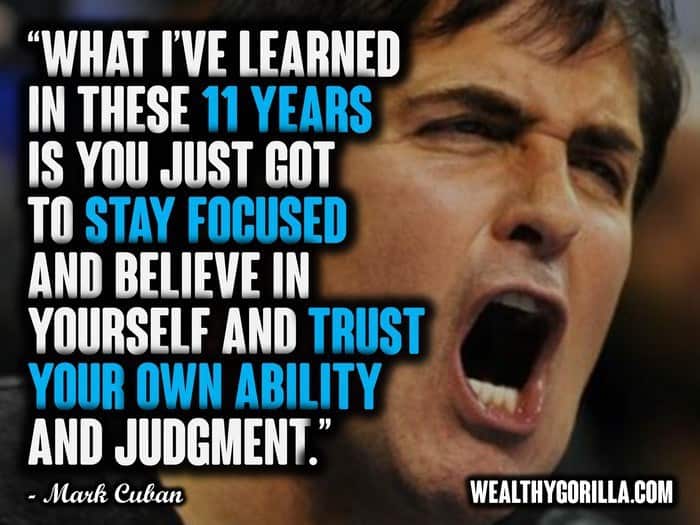 21. “What I’ve learned in these 11 years is you just got to stay focused and believe in yourself and trust your own ability and judgment.” – Mark Cuban

22. “The key is having great players. But there are a lot of teams that have All-Stars and haven’t been able to put it together.” – Mark Cuban

23. “Wherever I see people doing something the way it’s always been done, the way it’s ‘supposed’ to be done, following the same old trends, well, that’s just a big red flag to me to go look somewhere else.” – Mark Cuban

24. “Sweat equity is the most valuable equity there is. Know your business and industry better than anyone else in the world. Love what you do or don’t do it.” – Mark Cuban

25. “What I do know, at least what I think I have learned from my experiences in business, is that when there is a rush for everyone to do the same thing, it becomes more difficult to do. Not easier. Harder.” – Mark Cuban

27. “In my opinion, right now there’s way too much hype on the technologies and not enough attention to the real businesses behind them.” – Mark Cuban

28. “It is so much easier to be nice, to be respectful, to put yourself in your customers’ shoes and try to understand how you might help them before they ask for help, than it is to try to mend a broken customer relationship.” – Mark Cuban

29. “Make sure you are the boss. I don’t think I would encourage executives that work for me to blog. There can be only 1 public vision for an organization.” – Mark Cuban

30. “Money is a scoreboard where you can rank how you’re doing against other people.” – Mark Cuban 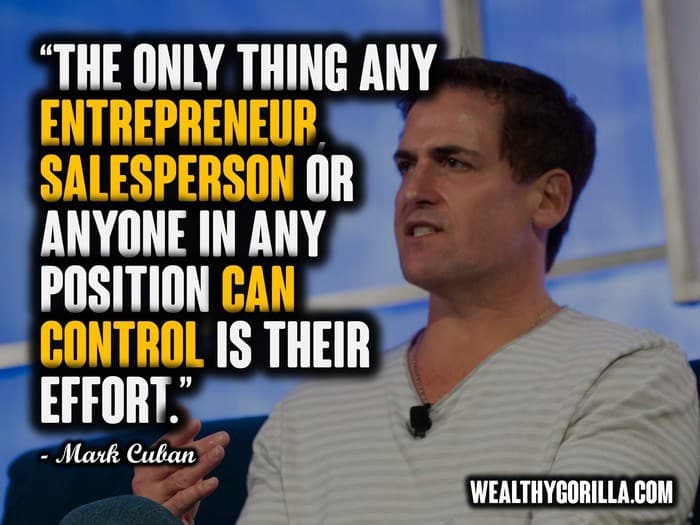 31. “The only thing any entrepreneur, salesperson or anyone in any position can control is their effort.” – Mark Cuban

32. “I’ve learned the number one job of a pro manager is not to win championships but to keep their job.” – Mark Cuban

33. “There are always going to be things we love to do. That we dream about doing. That we really, really want to do with our lives. Those passions aren’t worth a nickel.” – Mark Cuban

34. “I love to compete. To me, business is the ultimate sport. It’s always on. There is always someone trying to beat me.” – Mark Cuban

35. “Always wake up with a smile knowing that today you are going to have fun accomplishing what others are too afraid to do.” – Mark Cuban

36. “I’m a believer that you accomplish much, much more with direct relationships than by using an intermediary. And that cash you keep in the bank can be the difference between staying alive as a small business, or not.” – Mark Cuban

38. “Work like somebody is trying to take it all away from you.” – Mark Cuban

39. “Being rich is a good thing. Not just in the obvious sense of benefiting you and your family, but in the broader sense. Profits are not a zero sum game. The more you make, the more of a financial impact you can have.” – Mark Cuban 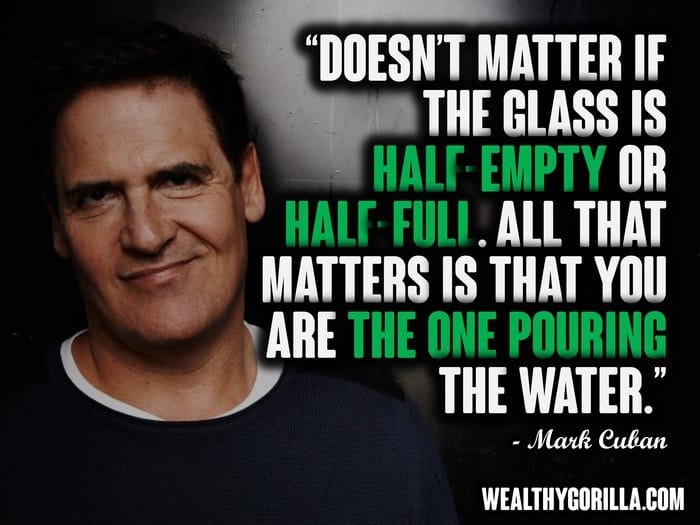 40. “Doesn’t matter if the glass is half-empty or half-full. All that matters is that you are the one pouring the water.” – Mark Cuban

41. “It’s not about money or connections — it’s the willingness to outwork and out-learn everyone… And if it fails, you learn from what happened and do a better job next time. We are acting in the best interests of shareholders.” – Mark Cuban

Thanks for checking out this awesome list of Mark Cuban quotes!

Don’t forget to check out all our other awesome quote articles. We have so many great quote collections on Wealthy Gorilla from entrepreneurs like Bill Gates, Richard Branson, Warren Buffett and so on.

What’s your favorite Mark Cuban quote? Leave a comment below.

Former professional racing driver Nigel Mansell has earned millions as both a Formula One and Indy Car World Series champion.