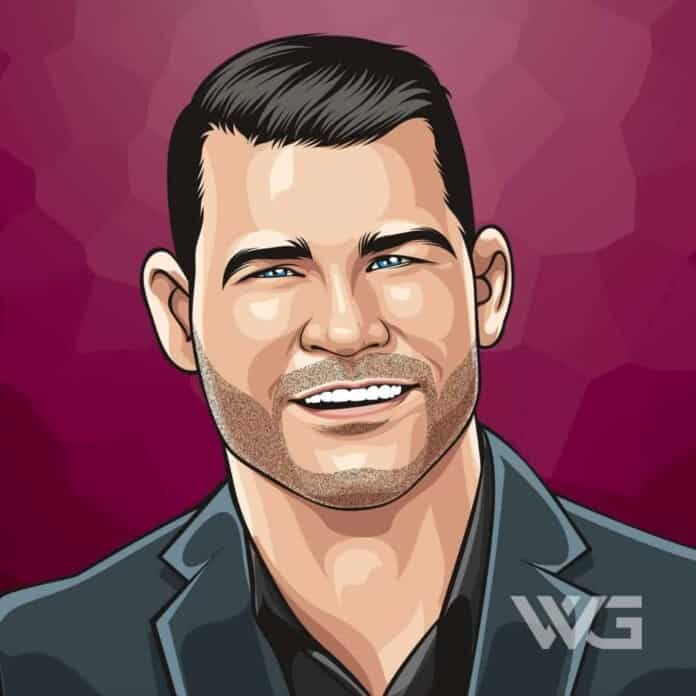 What is Michael Bisping’s net worth?

As of January 2023, Michael Bisping’s net worth is roughly $9 Million.

His father, Jan, was in the British Army and his mother is Irish.

Bisping began training Jujutsu at the age of 8. When he was 15 years old he competed as an amateur in Britain’s first “no holds barred” competition.

Bisping was featured on the UFC’s ‘The Ultimate Fighter 3′ reality television series in 2006.

Five months after his victory in the TUF 3 finals, Bisping was slated to fight Eric Schafer at The Ultimate Fighter 4 finale but withdrew because of problems acquiring his visa.

In 2007, he scored a TKO win over Elvis Sinosic at UFC 70 in Manchester. He was a special guest referee at the Cage Warriors events Enter The Wolfslair’ in 2005.

Since the start of his MMA career, people had been advising Bisping that he was a little too small for light heavyweight and would do better at middleweight. With the support of UFC president Dana White, Bisping then decided to drop down a weight division, following his loss to Evans.

In 2008 at UFC 83, Bisping made his middleweight debut against Charles McCarthy.

Bisping won by TKO, as McCarthy was unable to continue after the first round due to a forearm injury he sustained after receiving an unanswered series of knees and uppercuts from Bisping.

Bisping’s next fight at middleweight was scheduled to be on 7 June 2008 at UFC 85 in London, against Chris Leben. However, after Leben was sentenced to jail for 35 days and unable to compete, Jason Day stepped in.

Here are some of the best highlights of Michael Bisping’s career:

“People say sometimes that I’m distracted. That’s why I’m trying to do movies. I do the podcast. That’s because when I’m done, I want to be set up.” – Michael Bisping

“Due to the UFC educating people on MMA as a sport, people give us the respect as athletes, opening doors to opportunities which weren’t available in the past. It has been amazing to be part of the UFC journey.” – Michael Bisping

“Some people are born for a certain thing. And for me, unfortunately, I wish it was something a bit more artistic or whatever, but I was a born fighter. That’s what kept me coming back. It makes me feel alive. And, I just know, there is nothing I do better in this world than fight.” – Michael Bisping

“Financially, I’ve done very well doing what I do. I’ve got plenty of money in the bank. I’ve got gigs with FOX doing analyst work, media work. The UFC has been very kind to me. Ultimately, however, I want to be world champion. I have to achieve that to validate my entire career.” – Michael Bisping

“Without wishing to sound arrogant, when I was younger, I used to win every single martial arts tournament I ever entered. I used to enter the under 14s and under 16s, winning both gold medals in those, and then go in the men’s tournament just for the experience, and end up getting a silver medal.” – Michael Bisping

Reviewing your Big 5 annual goals every morning and working on your plan every day is an exceptionally powerful way to breed unbeatable focus and drive.

Measure your success via your influence and impact versus only by your income and net worth.

3. Learn to Be Happy

To become successful, first, learn how to be happy. Too many think that the route to happiness is to get successful. Untrue.

How much is Michael Bisping worth?

Michael Bisping’s net worth is estimated to be $9 Million.

How old is Michael Bisping?

How tall is Michael Bisping?

As of January 2023, Michael Bisping’s net worth is roughly $9 Million.

What do you think about Michael Bisping’s net worth? Leave a comment below.