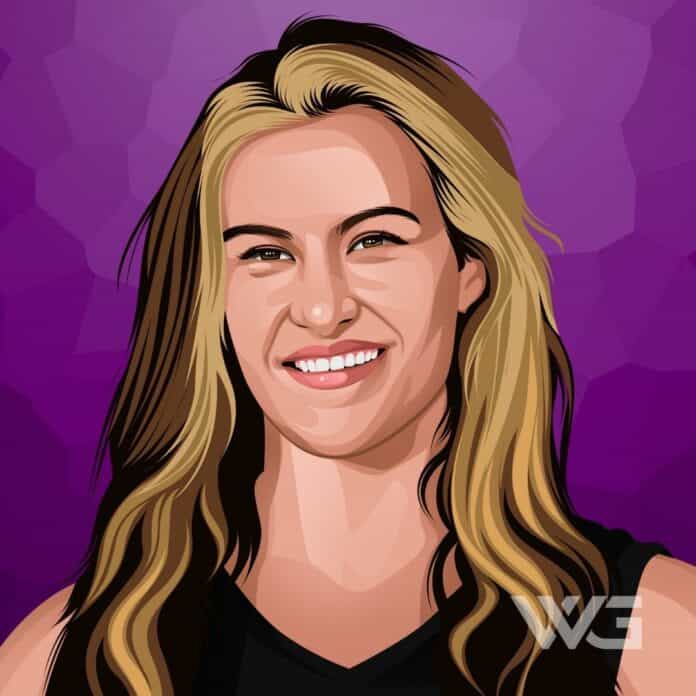 What is Miesha Tate’s net worth?

Miesha Tate is an American mixed martial artist who is a former UFC Women’s Bantamweight Champion.

Prior to joining the UFC, Tate was a Strikeforce Women’s Bantamweight Champion from 2011 to 2012.

As of January 2023, Miesha Tate’s net worth is estimated to be $6 Million.

After getting her training, Tate began an amateur career in mixed martial arts and had a 5-1 record before making her professional MMA debut in 2007.

In 2009, Tate won the FCF Women’s Bantamweight Championship over Lizbeth Carreiro and defended it successfully against Valerie Coolbaugh before heading to Strikeforce in 2010.

Tate defeated Marloes Coenen for the Strikeforce Women’s Bantamweight Championship after winning a number one contender tournament but dropped her first title defense to Ronda Rousey in March 2012.

The following year, Tate defeated Julie Kedzie in her final Strikeforce match then became a UFC fighter in 2013, though her UFC career would start with a loss to Cat Zingano.

Tate got a rematch with Rousey at UFC 168, but lost via submission to put her career record as a professional at 13-5.

She then went on a five-match winning streak against the likes of Holly Holm and Jessica Eye before dropping matches to Amanda Nunes and Raquel Pennington.

Tate retired after her loss to Pennington to become an executive for ONE Championship, but returned to the octagon in 2021 to defeat Marion Reneau before dropping decisions to Ketlen Vieira and Lauren Murphy.

Miesha Tate was simply trying to get by before starting her UFC career as she was earning four-figure payouts in her early Strikeforce days, with her first match paying just $1,500.

It wasn’t until her rematch with Ronda Rousey to determine the UFC Women’s Bantamweight Champion that she earned her first six-figure payout, with a $103,000 check.

She then earned another $60,000 to take on Raquel Pennington in 2016 before retiring to join ONE Championship for several years.

Tate made her return as a UFC fighter in 2021 and defeated Marion Reneau before dropping matches to Ketlen Vieira and Lauren Murphy, and was paid nearly $400,000 combined for those matches.

For her many headlining matches and big endorsement deals with Reebok and TaxSlayer, Miesha Tate is estimated to have a net worth of $5 million.

Miesha Tate and her sister Felicia Martin were raised by parents Rob and Michelle Tate in the state of Washington.

The couple has had two children together, with daughter Amaia born in 2018 and son Daxton born in 2020.

Away from the ring, Tate has been in reality television as she participated in Celebrity Big Brother, winning the show’s third season in 2022.

Miesha Tate has been winning awards for everything from Brazilian Jiu-Jitsu to her grappling career to her time in the UFC.

Tate is highly decorated and has found success at every stop in her career, including winning some of the world’s most prestigious honors.

Here are the top awards from Miesha Tate’s career over multiple sports:

At one point, it looked like Tate’s career was finished, but she decided to get back into the octagon.

Now, she has her sights set on winning more gold before going back into retirement, especially with the UFC.

How Does Miesha Tate Spend Her Money?

Miesha Tate made herself one of the richest MMA fighters in the world, especially for female fighters.

Tate doesn’t drive the most expensive cars in the world, but does have a love for stock car racing as she was represented by NASCAR racer Kevin Harvick and his management company.

Among the cars that Tate has for herself include a Range Rover and Mercedes AMG that’s estimated to be around $93,000.

Tate is not living in one of the most expensive houses in the world, but rather a modest home worth $180,000 in Las Vegas, Nevada where she trains as a UFC fighter.

Miesha Tate finds herself in the same tier as Joanna Jedrzejczyk and Gina Carano in terms of female mixed martial artists.

Tate truly helped to make the sport what it is today, and has had a long list of accomplishments along the way.

Here are some of the best highlights of Miesha Tate’s career:

Tate has just about done it all during her illustrious career, and has also been on the cover of the ESPN Body Issue and Fitness Gurls Magazine.

Between her Strikeforce career and UFC career, Tate has one of the best resumes that you’ll find for a professional fighter.

Miesha Tate has never been afraid to say what’s on her mind when given a microphone by Joe Rogan or sitting down for an interview.

Tate isn’t one that talks a lot of trash, but is happy to speak about life in the octagon and what it means to be a female UFC fighter.

Here are our favorite quotes from Miesha Tate:

Miesha Tate is one of the most popular fighters that Dana White has had in the UFC, and she’s accomplished a lot both inside and outside the octagon.

Tate helped to push the women’s division to where it is today, and has a lot of great advice to give to girls that want to follow in her footsteps.

Now that you know all about Miesha Tate’s net worth, there’s plenty to learn from the former UFC Bantamweight Champion.

Here are some of the best success lessons to learn from Miesha Tate:

Miesha Tate revealed that girls should follow their passion no matter what it is when she was asked what advice she would give.

Tate also said that things like money and fame will come when you’re following your passions, and nothing should get in your way.

Even if people tell you that you should be focusing on something more traditional or that your dream won’t come true, it’s best to ignore the noise.

2. You Can Come Back

No matter what it is that you love to do, there come a time where you have to step away for a little bit to take care of other things.

That’s what happened for Tate as she left professional fighting and became a mother to two children.

Tate didn’t stay retired, though, working her way back to the octagon and once again performing at a high level in the UFC.

Almost nobody finishes their career with a perfect record in anything no matter what type of job it might be.

There are going to be losses and other roadblocks that set you back, but those are learning opportunities to make yourself better.

Tate says that she’s glad she got to experience the losses in her mixed martial arts career as she bounced back better than ever each time.

Miesha Tate is one of the most influential female fighters in mixed martial arts history thanks to bringing the sport to the forefront of the UFC.

The former UFC Bantamweight Champion thought that her career was over, but decided that there was more that she could give to the sport.

As of January 2023, Miesha Tate’s net worth is estimated to be $6 Million.

What do you think about Miesha Tate’s net worth? Leave a comment below.