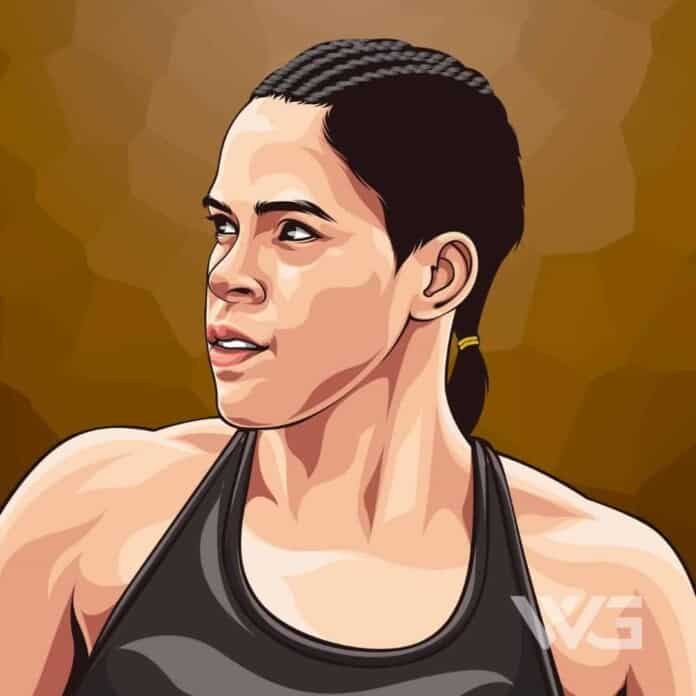 What is Amanda Nunes’ net worth?

As of February 2023, Amanda Nunes’ net worth is estimated to be $4 Million.

Amanda Nunes is a Brazilian mixed martial artist who currently fights for the Ultimate Fighting Championship (UFC), where she is the reigning champion in both the women’s Bantamweight and Featherweight divisions.

She is the first woman in UFC history to become a two-division champion.

Amanda Nunes was born on the 30th of May, 1988, in Salvador, Brazil. She started training in Karate at age four and pursued training in Boxing at the age of sixteen.

She first competed in Brazilian Jiu-Jitsu after being invited to a dojo by her sister, who also trained in the sport.

Nunes made her Octagon debut against Sheila Gaff at UFC 163 on August 3, 2013, in Brazil. She won the fight via TKO in the first round. Nunes made her second UFC appearance when she faced Germaine de Randamie at UFC Fight Night 31 on November 6, 2013.

For her third fight with the promotion, Nunes was named the injury replacement for Shayna Baszler against Sarah Kaufman at The Ultimate Fighter Nations Finale.

After amassing a three-fight win streak, Nunes earned her first title shot in the UFC. She faced Miesha Tate for the UFC Women’s Bantamweight Championship in 2016, at UFC 200.

After becoming the Bantamweight champion, her first title defense was against Ronda Rousey, who had taken a year off from fighting, after losing to Holly Holm.

For her second title defense, Nunes was scheduled to face Valentina Shevchenko in a rematch at UFC 213 in 2017. The pair originally fought at UFC 196 with Nunes winning by unanimous decision.

Joanna Jędrzejczyk offered to replace Nunes, but the Nevada State Athletic Commission could not clear her on such short notice.

Here are some of the best highlights of Amanda Nunes’ career:

“It will be tough, I’m thinking about fighting at the end of the year, around November or December. I’m in Brazil now, taking care of family things, wouldn’t have time to get prepared for May.” – Amanda Nunes

“I want to defend my [bantamweight] belt first because when I moved up, I left the division stalled,” Nunes said. “I think it makes sense that the next fight is against Holly Holm, the only ex-champion I haven’t faced. After, I think it would be cool to rematch Cyborg. And then I’ll stop.” – Amanda Nunes

“They don’t call me yet, but I’m waiting for it, let’s see what’s going to happen. I think this fight is very interesting. Holly Holm is the only fighter who is a former champion who I didn’t fight her. That would be an interesting fight. I’m looking for this fight with Holly for sure and I’m ready for the call.” – Amanda Nunes

“I went home to see my family and stay a little bit with my family and my mom (said), ‘I think you should retire, I think (about it) a little bit. We’ll see with this next stage what’s going on. I’m a little bit tired of all the big fights. I’m very happy and glad and proud that I did all that and I want a little break to get a family and focus more on Nina’s career. We’ll see. I say those things, but you know how fighting is. We get involved so much and then we want to do it again. We’ll see.” – Amanda Nunes

Now that you know all about Amanda Nunes’ net worth, and how she achieved success; let’s take a look at some of the strongest lessons we can learn from her:

1. Don’t Be Afraid to Be Different

Society will insist that you conform to the norm. Don’t give in to the pressure. Embrace your uniqueness and let it shine. Those hidden qualities are your assets.

2. It Takes Wisdom to Discern What Things Don’t Work For You

But when you learn to recognize the toxic influences in your life, you steer clear of them. Allow yourself to flourish and thrive in an environment of positivity.

You have a purpose, a personal mission. Although things may be unclear to you, for now, your presence here has a significance.

How much is Amanda Nunes worth?

Amanda Nunes’ net worth is estimated to be $4 Million.

How old is Amanda Nunes?

How tall is Amanda Nunes?

Amanda Nunes is a Brazilian Mixed Martial Artist who made her MMA debut on March 8, 2008, and was defeated in the first round by an opponent named Ana Maria.

She is the reigning champion in both the women’s Bantamweight and Featherweight divisions. She is the first woman in UFC history to become a two-division champion.

As of February 2023, Amanda Nunes’ net worth is estimated to be $4 Million.

What do you think about Amanda Nunes’ net worth? Leave a comment below.