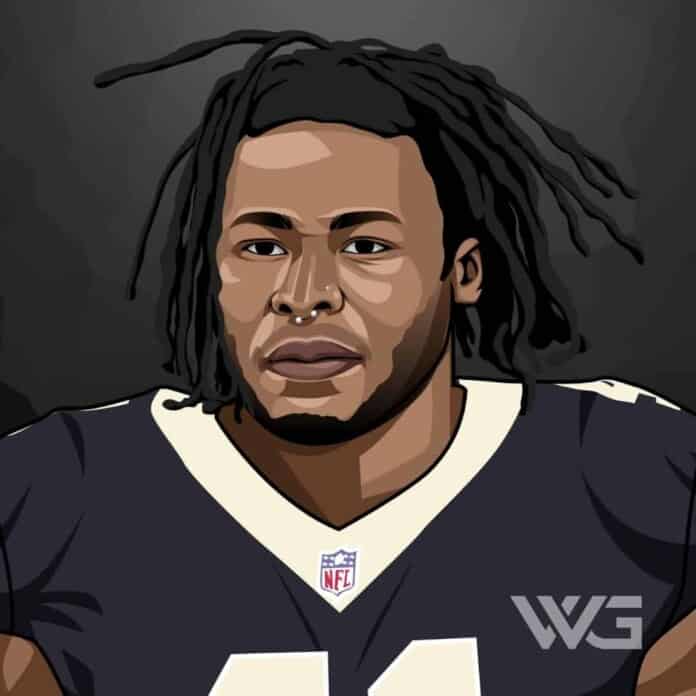 What is Alvin Kamara’s net worth?

Alvin Kamara is an American football running back for the New Orleans Saints of the NFL.

He played college football at the University of Tennessee and was drafted by the Saints in the third round of the 2017 NFL Draft.

As of December 2022, Alvin Kamara’s net worth is roughly $8 Million.

Alvin Mentian Kamara was born on the 25th of July, 1995, in Georgia. Kamara is the son of a Liberian mother. He attended Norcross High School in Norcross, Georgia.

As a senior in 2012, he rushed for 2,264 yards with 26 touchdowns, and he had 22 receptions for 286 yards and five touchdowns and led his high school to its first state championship.

As a result of his successful high school career, Kamara earned Georgia Mr. Football honors from the Atlanta Journal-Constitution.

The New Orleans Saints selected Kamara in the third round 67th overall of the 2017 NFL Draft. He was the fifth running back selected.

Kamara split backfield duties with Mark Ingram Jr. through the 2017 season, with fewer carries but more receptions than his teammate.

In Week 2 against the New England Patriots, his role in the passing game expanded with three receptions for 51 yards in the 36–20 loss; he also returned three kickoffs but would return only one more until Week 16 of the season.

The same year, the Saints finished with an 11–5 record and won the NFC South. In the Wild Card Round against the Carolina Panthers, Kamara had 23 rushing yards, a rushing touchdown, and one reception for 10 yards in the 31–26 victory.

In Week 15, a narrow 12–9 victory over the Carolina Panthers, Kamara had the Saints’ lone touchdown on a 16-yard rush.

Here are some of the best highlights of Alvin Kamara’s career:

“I didn’t really avoid them. I’m not really one to watch myself. Once the season ended, I wasn’t really interested in going back. I and my friends were all at my house, we were just watching everybody’s highlights, and then I went, they were like, “Man, we gotta watch your highlights.” – Alvin Kamara

“It doesn’t make sense. I’m not about to pay you $30 to take me four or five lights down the street. Like, it’s not happening. And then they are trying to finesse on game day. They like, “It’s $30 plus six dollars a person.” And I’m like, “All right, fuck you. I’m about to go. That’s cool.” And I just keep walking.” – Alvin Kamara

“Yeah, it’s under a whole bunch of shit, honestly. I can’t even lie. I haven’t put it up anywhere or nothing. It’s still in the case that they sent it to me in.” – Alvin Kamara

Now that you know all about Alvin Kamara’s net worth, and how he achieved success; let’s take a look at some of the lessons we can learn from him:

It is easy to make promises – it is hard work to keep them.

It’s all about the hard work, knowing your strengths and weaknesses. You work on what you know you can do best.

The last thing you want is to not be recognised for all of the hard work you put in.

How much is Alvin Kamara worth?

Alvin Kamara’s net worth is estimated to be $8 Million.

How old is Alvin Kamara?

How tall is Alvin Kamara?

As of December 2022, Alvin Kamara’s net worth is roughly $8 Million.

What do you think about Alvin Kamara’s net worth? Leave a comment below.