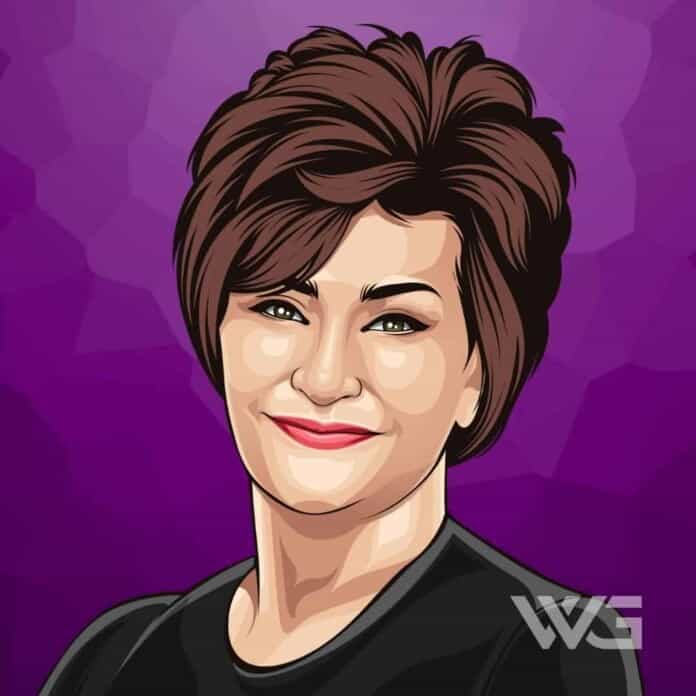 What is Sharon Osbourne’s net worth?

As of February 2023, Sharon Osbourne’s net worth is approximately $220 Million.

Osbourne is first known for being the wife of the heavy metal singer Ozzy Osbourne. She initially gained recognition when she appeared in the reality show ‘The Osbourne’s’.

Since then, she has been seen on shows such as the British ‘The X Factor’ and ‘America’s Got Talent.

Sharon Rachel Osbourne was born in London, England on the 9th of October, 1952. Osbourne is the daughter of an English Jew, Don Arden and his wife Hope. She has one brother named David.

At the age of 17, she lost her virginity and realized two months later that she was pregnant.

Osbourne’s father, Don Arden, was a rock and roll entrepreneur who managed Black Sabbath and sacked Ozzy Osbourne from the group. Don resented his daughter for dating Ozzy and she lost contact with her father and didn’t speak to him for 20 years.

Sharon Osbourne met her husband Ozzy Osbourne when her father, Don, used to manage Black Sabbath where Ozzy was the singer. Ozzy was fired by her father in 1979 after an episode of substance abuse.

They began dating and soon they were married. Sharon took on to help Ozzy as her client and began managing his career. They made a successful business team and she helped to launch his solo career.

Osbourne helped Ozzy to recruit a talented backing band comprising of Randy Rhoads, Lee Kerslake, and Bob Daisley. She managed her husband’s successful career throughout the 1980s and 1990s. Osbourne founded Ozzfest, which is a festival tour of the U.S by several heavy metal and hard rock bands.

She set up her own management company, ‘Sharon Osbourne Management’. In 2002, the show, ‘The Osbournes’ following the life of her husband Ozzy and his family was aired on MTV, which gained Sharon a celebrity status as a result.

Her biography, ‘Extreme’ was published in 2005, where she told about her difficult childhood and topped the list of ‘Sunday Times’ bestsellers. She was the judge on British talent show ‘The X Factor’ from 2004 to 2007 and was on the judging panel on ‘America’s Got Talent’ in 2007.

Here are some of the best highlights of Sharon Osbourne’s career:

“But I won’t be doing it next year; physically I can’t. This was my year, my last hurrah, my chance to complete the circle and put a few old ghosts to rest. I had something to prove. I wanted it to be the perfect finale- ten years of something I had been a part of starting.” – Sharon Osbourne

“We can go for weeks without talking to each other, but we never have to explain why we haven’t been in touch. We simply pick up where we left off. That’s true friendship.” – Sharon Osbourne

“I didn’t even think of my breasts in a nostalgic way, I just wanted to be able to live my life without that fear all the time. It’s not ‘pity me’, it’s a decision I made that’s got rid of this weight that I was carrying around.” – Sharon Osbourne

“There is a hideous epidemic of it [marriage] being bound up with people’s careers. Everybody needs to stop looking for perfect, cardboard cut-out partners because that won’t work and it won’t last. If you have children and there is still love there, then you have to keep trying and absolutely exhaust that love before you opt-out. But if you don’t have children, then just head for the hills.” – Sharon Osbourne

How much is Sharon Osbourne worth?

Sharon Osbourne’s net worth is estimated to be $220 Million.

How old is Sharon Osbourne?

How tall is Sharon Osbourne?

Sharon Osbourne has starred in multiple TV-shows that have helped her to gain incredible success.

Alongside her superstar singer husband Ozzy Osbourne, they starred in the reality show ‘The Osbournes’ which gained global success. Since then, she has been in shows such as ‘America’s Got Talent’ and ‘X-Factor’.

What do you think about Sharon Osbourne’s net worth? Leave a comment below.