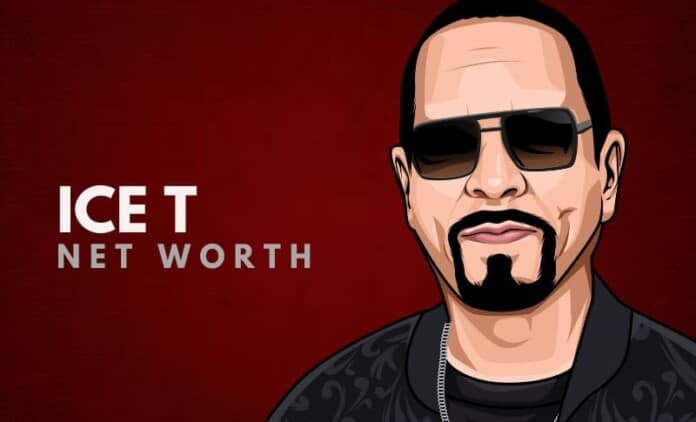 What is Ice T’s net worth?

Ice T is an American musician, rapper, songwriter, actor, record producer, and author from New Jersey. He began his career as an underground rapper in the 1980s and was signed to Sire Records in 1987.

Ice-T was born on the 16th of February, 1958, in New Jersey. He is the son to Solomon, an African-American who worked as a conveyor belt mechanic at the Rapistan Conveyor Company and Alice Marrow.

He had an encounter with racism as a child but escaped it because of his lighter skin inherited from his Creole mother. By the time he was twelve, he lost both his parents.

In 1979, Ice T joined the U.S Army as the money he got from selling cannabis and stolen car stereos were not enough to support his girlfriend and daughter. He served in the Army for 4 years.

By 1983, he had adopted the name Ice-T in honor of Iceberg Slim and recorded a rap called, The Coldest Rap, over a funky Jimmy Jam-Terry Lewis backing track on the independent label Saturn.

After honing his craft by creating music for videos and releasing recordings, he signed with Sire Records in 1987 and released ‘Rhyme Pays’, his debut album, which eventually went gold.

Between the years 1987 and 1988, he recorded the title theme song for Dennis Hopper’s film, Colors, about inner-city gang life in Los Angeles.

His 1992 album, Body Count, had the controversial song, Cop Killer, a song intended as a narrative from the view of criminals getting revenge on racist police officers.

He collaborated with heavy metal bands during this time period. For the film, ‘Judgment Night’, he did a duet with Slayer and in 1995, he guest performed on Forbidden by Black Sabbath.

Here are some of the best highlights of Ice T’s career:

“Dealing with the old school rappers, you see a lot of humility. When you’re new, nothing is wrong. Everything is tight. Because you’re trying to hype the world into believing in you.” – Ice T

Now that you know all about Ice T’s net worth, and how he achieved success; let’s take a look at some of the best lessons we can learn from him:

Having a hobby is proven to be beneficial in increasing your happiness levels. Make something.

You must have the wisdom to discern the difference between fleeting happiness and true joy. Happiness can’t be bought.

There is no shortcut to success, whether in your career or personal life. When you do hard things you actually feel happier because you accomplish something of value.

How much is Ice T worth?

Ice T’s net worth is estimated to be $65 Million.

How old is Ice T?

How tall is Ice T?

Ice-T is an American rapper, singer and actor. He co-founded the heavy metal band, Body Count, which he introduced in his album, O.G.

He has also been active in television and has been portraying the fictional detective Odafin Fin Tutuola in the series of Law & Order: Special Victims Unit for a long time now.

What do you think about Ice T’s net worth? Leave a comment below.